Boat of the Month

In the very near future, the new scientific Research Vessel Investigator will enter service for the Commonwealth Scientific and Industrial Research Organization (CSIRO), an agency of the Federal Government of Australia. Investigator went to sea for her initial sea trials in December 2013. Once deployed, Investigator will be among the quietest and most capable research vessels in the world, serving multiple, diverse scientific roles in a geographical areas spanning one-third the circumference of the globe.
The design was developed by RALion, a joint venture between Vancouver BC Naval Architects, Robert Allan Ltd, Alion Science and Technology of Alexandria, Virginia and Alion Canada of Ottawa. The acoustic analysis, noise treatments and noise trial measurements were performed by Noise Control Engineering of the US. The vessel was launched on July 21st, 2013 and then officially named Investigator at a ceremony in Singapore in September.
The vessel will potentially raise the bar for science vessels – here and abroad – in a sector where research vessels often emanate from platforms not originally designed for the purpose. Moreover, financial constraints for research organizations, universities and other government efforts often do not allow for the most environmentally correct equipment. Investigator changes that mindset. Described loosely as a combination of the large AGOR’s (23 & 24) class built in 1990’s and the NOAA fishery science vessels built at Halter and Marinette, the vessel’s price tag was said to be in the range of $125 million, the high end of what is typically spent on this type of vessel. That said; Investigator is a scientist’s dream platform, with virtually every bell and whistle the research community could possibly want. Investigator is classed by Lloyds Register of Shipping as a +100A1, +LMC, UMS Ice 1C IWS, EP, DP (AM) and DNV SILENT-R research vessel.
Designed to meet the underwater radiated noise requirements of the DNV “Silent R” notation up to 11 knots, this capability allows the vessel to undertake sensitive environmental research.  A low radiated noise signature is critical for vessels engaged in fisheries and marine mammal research to avoid disturbing the habitats they are studying.  A low noise signature is also crucial to ensuring that the vessel’s large suite of scientific survey sonars has the capability to reach the greatest depths of the world’s oceans.  To meet this stringent underwater radiated noise level, a comprehensive program of noise control engineering and production practices was established. For example, all three MaK main diesel generators are double resiliently mounted on an isolation system engineered by NCE and RALion and supplied by MaK.  This mounting system is specifically designed to absorb vibration. And, the Wartsila 5-bladed propellers have a unique blade shape specially designed to be free of cavitation up to 12 knots. During the sea trial, Investigator was found to have exceeded all of her noise requirements, including radiated, habitability, and structural vibration.
Investigator is fitted out with a full range of scientific laboratories, science and fishing winches, coring equipment, air and water sampling devices, and acoustic systems. She is capable of a variety of oceanographic operations in coastal and deep ocean areas, including the physical, chemical and biological oceanography, environmental investigations, ocean engineering and marine acoustics, coastal hydrographic survey, marine geology and geophysics, bathymetric surveys and fisheries research. An interesting feature is the vessel’s gondola and two retractable drop keels to house the extensive scientific sonar and transducer suites, supplied by Kongsberg. The vessel is fitted with a stern ramp and towing gallows to support fisheries research activities.
The vessel potentially represents the new benchmark for global research vessels. With its Tier II engines, self contained (zero discharge at sea) sewage treatment system and other green features, it also sets a new standard for environmental stewardship, consistent with the mission of such a vessel. The vessel enters service, fully commissioned, less than three years after award of the design and construction contract; a remarkable feat given the size and complexity of this ship.
www.alionscience.com  / www.ral.ca

(As published in the March 2014 edition of Marine News - www.marinelink.com) 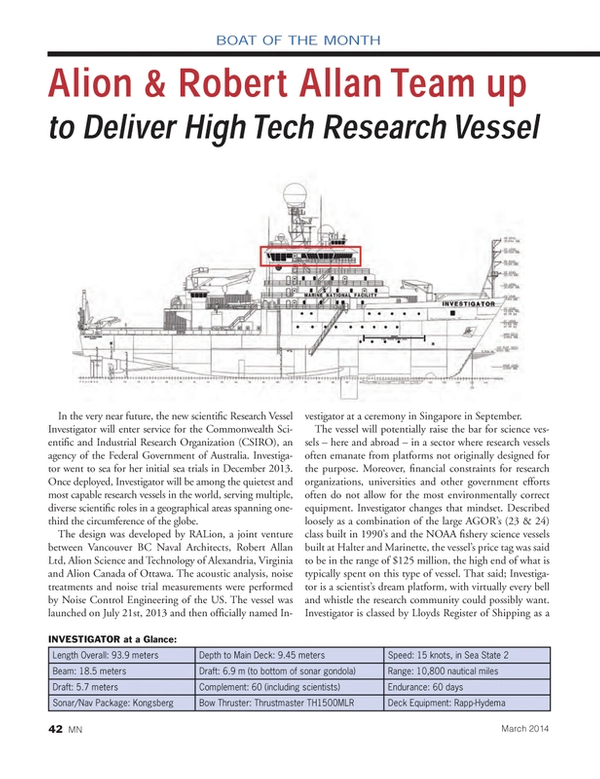 Read Boat of the Month in Pdf, Flash or Html5 edition of March 2014 Marine News