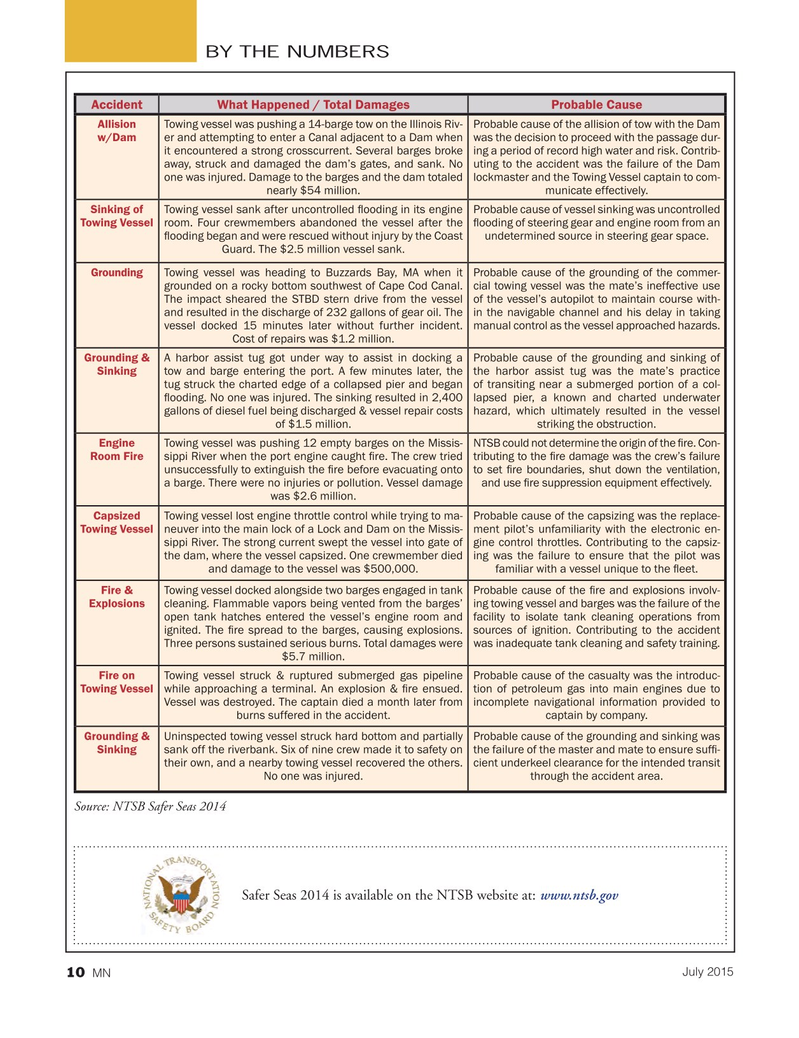 Allision Towing vessel was pushing a 14-barge tow on the Illinois Riv- Probable cause of the allision of tow with the Dam w/Dam er and attempting to enter a Canal adjacent to a Dam when was the decision to proceed with the passage dur- it encountered a strong crosscurrent. Several barges broke ing a period of record high water and risk. Contrib- away, struck and damaged the dam’s gates, and sank. No uting to the accident was the failure of the Dam one was injured. Damage to the barges and the dam totaled lockmaster and the Towing Vessel captain to com- nearly $54 million. municate effectively.

Sinking of Towing vessel sank after uncontrolled ? ooding in its engine Probable cause of vessel sinking was uncontrolled

Towing Vessel room. Four crewmembers abandoned the vessel after the ? ooding of steering gear and engine room from an ? ooding began and were rescued without injury by the Coast undetermined source in steering gear space.

Grounding Towing vessel was heading to Buzzards Bay, MA when it Probable cause of the grounding of the commer- grounded on a rocky bottom southwest of Cape Cod Canal. cial towing vessel was the mate’s ineffective use

The impact sheared the STBD stern drive from the vessel of the vessel’s autopilot to maintain course with- and resulted in the discharge of 232 gallons of gear oil. The in the navigable channel and his delay in taking vessel docked 15 minutes later without further incident. manual control as the vessel approached hazards.

Sinking tow and barge entering the port. A few minutes later, the the harbor assist tug was the mate’s practice tug struck the charted edge of a collapsed pier and began of transiting near a submerged portion of a col- ? ooding. No one was injured. The sinking resulted in 2,400 lapsed pier, a known and charted underwater gallons of diesel fuel being discharged & vessel repair costs hazard, which ultimately resulted in the vessel of $1.5 million. striking the obstruction.

Engine Towing vessel was pushing 12 empty barges on the Missis- NTSB could not determine the origin of the ? re. Con-

Room Fire sippi River when the port engine caught ? re. The crew tried tributing to the ? re damage was the crew’s failure unsuccessfully to extinguish the ? re before evacuating onto to set ? re boundaries, shut down the ventilation, a barge. There were no injuries or pollution. Vessel damage and use ? re suppression equipment effectively.

Towing Vessel neuver into the main lock of a Lock and Dam on the Missis- ment pilot’s unfamiliarity with the electronic en- sippi River. The strong current swept the vessel into gate of gine control throttles. Contributing to the capsiz- the dam, where the vessel capsized. One crewmember died ing was the failure to ensure that the pilot was and damage to the vessel was $500,000. familiar with a vessel unique to the ? eet.

Fire & Towing vessel docked alongside two barges engaged in tank Probable cause of the ? re and explosions involv-

Explosions cleaning. Flammable vapors being vented from the barges’ ing towing vessel and barges was the failure of the open tank hatches entered the vessel’s engine room and facility to isolate tank cleaning operations from ignited. The ? re spread to the barges, causing explosions. sources of ignition. Contributing to the accident

Towing Vessel while approaching a terminal. An explosion & ? re ensued. tion of petroleum gas into main engines due to

Vessel was destroyed. The captain died a month later from incomplete navigational information provided to burns suffered in the accident. captain by company.

Sinking sank off the riverbank. Six of nine crew made it to safety on the failure of the master and mate to ensure suf? - their own, and a nearby towing vessel recovered the others. cient underkeel clearance for the intended transit

No one was injured. through the accident area.

Safer Seas 2014 is available on the NTSB website at: www.ntsb.gov