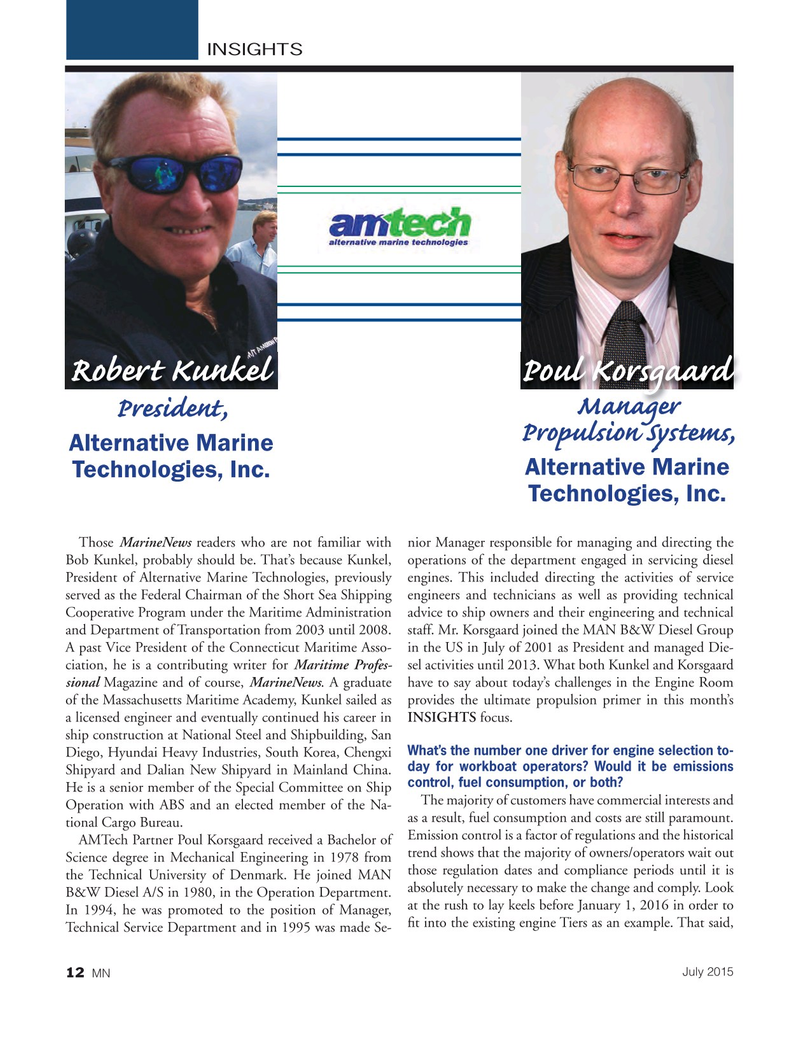 Bob Kunkel, probably should be. That’s because Kunkel, operations of the department engaged in servicing diesel

President of Alternative Marine Technologies, previously engines. This included directing the activities of service served as the Federal Chairman of the Short Sea Shipping engineers and technicians as well as providing technical

Cooperative Program under the Maritime Administration advice to ship owners and their engineering and technical and Department of Transportation from 2003 until 2008. staff. Mr. Korsgaard joined the MAN B&W Diesel Group

A past Vice President of the Connecticut Maritime Asso- in the US in July of 2001 as President and managed Die- ciation, he is a contributing writer for Maritime Profes- sel activities until 2013. What both Kunkel and Korsgaard sional Magazine and of course, MarineNews. A graduate have to say about today’s challenges in the Engine Room of the Massachusetts Maritime Academy, Kunkel sailed as provides the ultimate propulsion primer in this month’s a licensed engineer and eventually continued his career in INSIGHTS focus.

What’s the number one driver for engine selection to-

Shipyard and Dalian New Shipyard in Mainland China. control, fuel consumption, or both?

He is a senior member of the Special Committee on Ship

The majority of customers have commercial interests and

Operation with ABS and an elected member of the Na- as a result, fuel consumption and costs are still paramount. tional Cargo Bureau.

Science degree in Mechanical Engineering in 1978 from trend shows that the majority of owners/operators wait out the Technical University of Denmark. He joined MAN those regulation dates and compliance periods until it is

B&W Diesel A/S in 1980, in the Operation Department. absolutely necessary to make the change and comply. Look