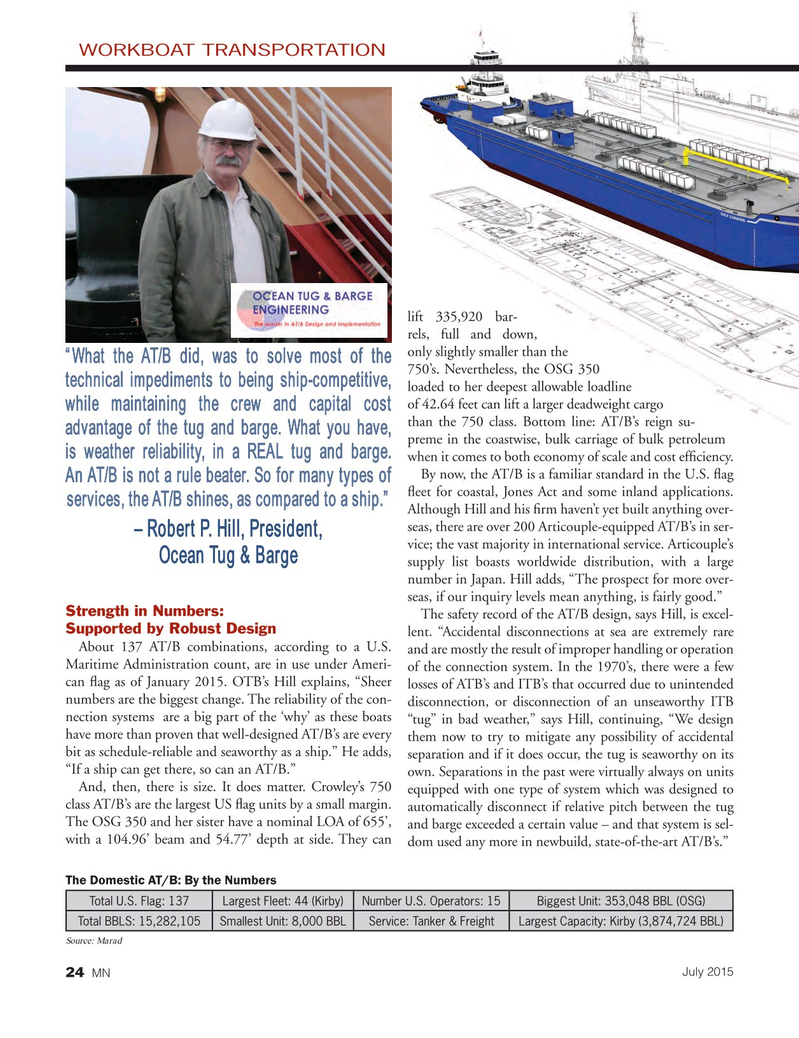 WORKBOAT TRANSPORTATION lift 335,920 bar- rels, full and down, only slightly smaller than the “What the AT/B did, was to solve most of the 750’s. Nevertheless, the OSG 350 technical impediments to being ship-competitive, loaded to her deepest allowable loadline of 42.64 feet can lift a larger deadweight cargo while maintaining the crew and capital cost than the 750 class. Bottom line: AT/B’s reign su- advantage of the tug and barge. What you have, preme in the coastwise, bulk carriage of bulk petroleum is weather reliability, in a REAL tug and barge. when it comes to both economy of scale and cost ef? ciency.

An AT/B is not a rule beater. So for many types of ? eet for coastal, Jones Act and some inland applications. services, the AT/B shines, as compared to a ship.”

Although Hill and his ? rm haven’t yet built anything over- seas, there are over 200 Articouple-equipped AT/B’s in ser- – Robert P. Hill, President, vice; the vast majority in international service. Articouple’s

Ocean Tug & Barge supply list boasts worldwide distribution, with a large number in Japan. Hill adds, “The prospect for more over- seas, if our inquiry levels mean anything, is fairly good.”

The safety record of the AT/B design, says Hill, is excel-

About 137 AT/B combinations, according to a U.S. and are mostly the result of improper handling or operation

Maritime Administration count, are in use under Ameri- of the connection system. In the 1970’s, there were a few can ? ag as of January 2015. OTB’s Hill explains, “Sheer losses of ATB’s and ITB’s that occurred due to unintended numbers are the biggest change. The reliability of the con- disconnection, or disconnection of an unseaworthy ITB nection systems are a big part of the ‘why’ as these boats “tug” in bad weather,” says Hill, continuing, “We design have more than proven that well-designed AT/B’s are every them now to try to mitigate any possibility of accidental bit as schedule-reliable and seaworthy as a ship.” He adds, separation and if it does occur, the tug is seaworthy on its “If a ship can get there, so can an AT/B.” own. Separations in the past were virtually always on units

And, then, there is size. It does matter. Crowley’s 750 equipped with one type of system which was designed to class AT/B’s are the largest US ? ag units by a small margin. automatically disconnect if relative pitch between the tug

The Domestic AT/B: By the Numbers