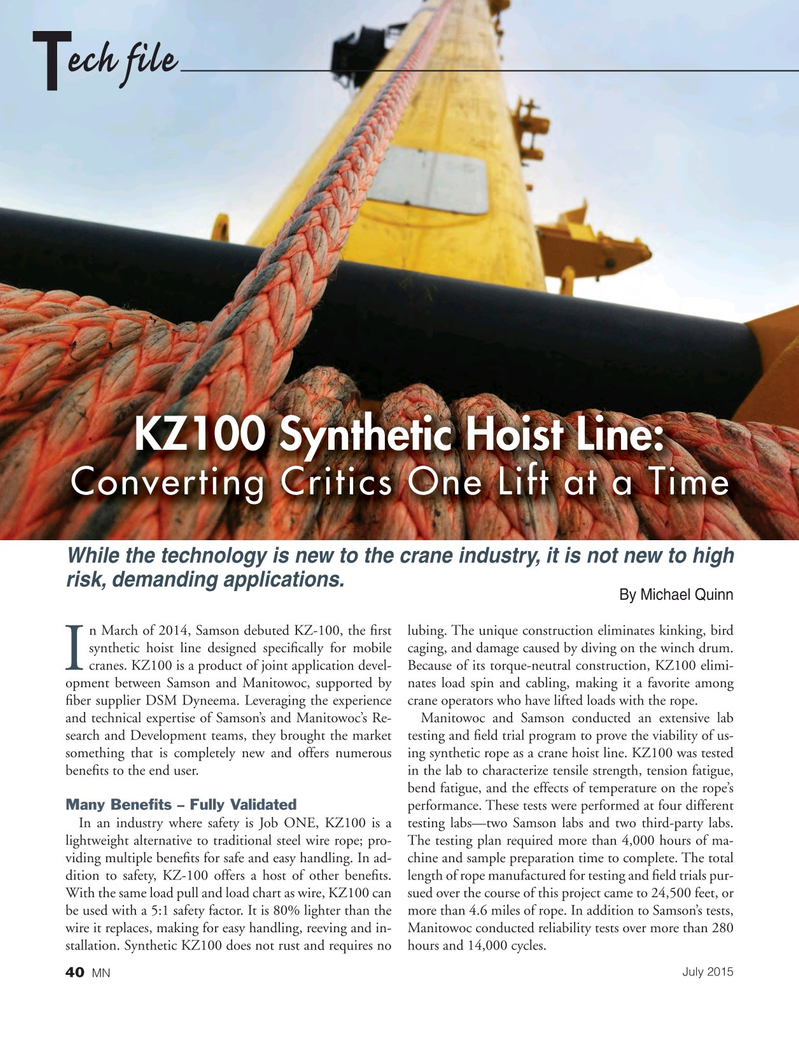 Converting Critics One Lift at a Time

While the technology is new to the crane industry, it is not new to high risk, demanding applications.

I cranes. KZ100 is a product of joint application devel- Because of its torque-neutral construction, KZ100 elimi- opment between Samson and Manitowoc, supported by nates load spin and cabling, making it a favorite among ? ber supplier DSM Dyneema. Leveraging the experience crane operators who have lifted loads with the rope.

and technical expertise of Samson’s and Manitowoc’s Re- Manitowoc and Samson conducted an extensive lab search and Development teams, they brought the market testing and ? eld trial program to prove the viability of us- something that is completely new and offers numerous ing synthetic rope as a crane hoist line. KZ100 was tested bene? ts to the end user. in the lab to characterize tensile strength, tension fatigue, bend fatigue, and the effects of temperature on the rope’s

Many Bene? ts – Fully Validated performance. These tests were performed at four different

In an industry where safety is Job ONE, KZ100 is a testing labs—two Samson labs and two third-party labs. lightweight alternative to traditional steel wire rope; pro- The testing plan required more than 4,000 hours of ma- viding multiple bene? ts for safe and easy handling. In ad- chine and sample preparation time to complete. The total dition to safety, KZ-100 offers a host of other bene? ts. length of rope manufactured for testing and ? eld trials pur-

With the same load pull and load chart as wire, KZ100 can sued over the course of this project came to 24,500 feet, or be used with a 5:1 safety factor. It is 80% lighter than the more than 4.6 miles of rope. In addition to Samson’s tests, wire it replaces, making for easy handling, reeving and in- Manitowoc conducted reliability tests over more than 280 stallation. Synthetic KZ100 does not rust and requires no hours and 14,000 cycles.