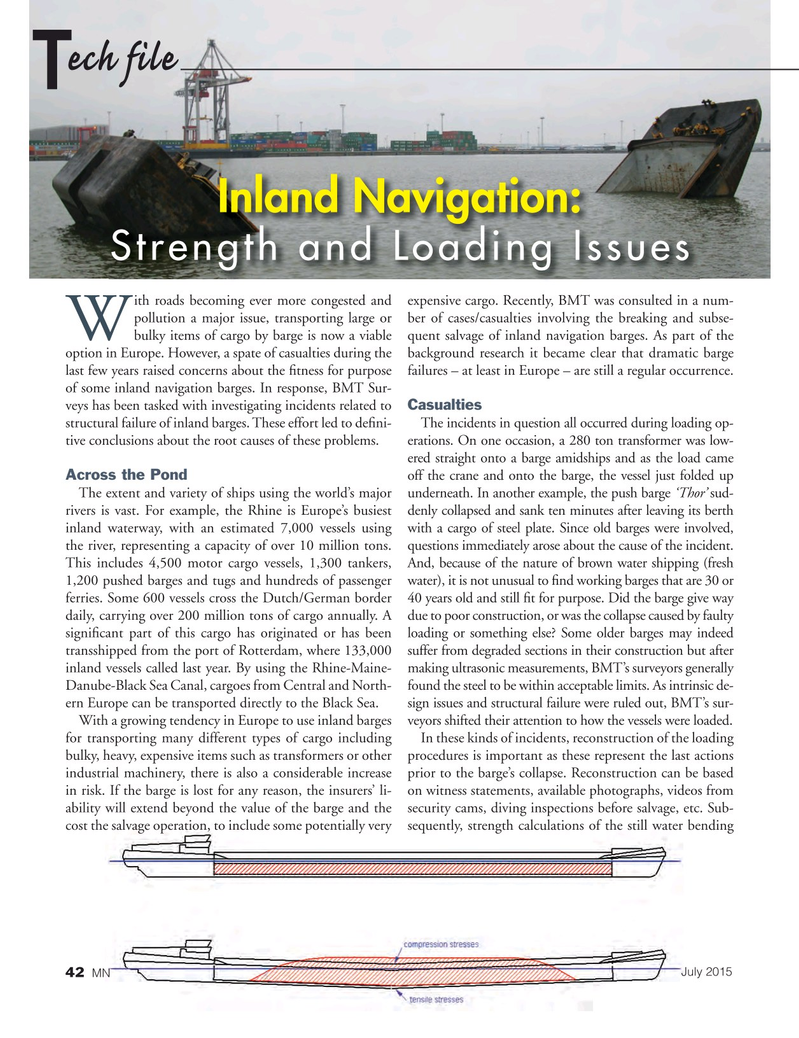 Strength and Loading Issues ith roads becoming ever more congested and expensive cargo. Recently, BMT was consulted in a num- pollution a major issue, transporting large or ber of cases/casualties involving the breaking and subse-

W bulky items of cargo by barge is now a viable quent salvage of inland navigation barges. As part of the option in Europe. However, a spate of casualties during the background research it became clear that dramatic barge last few years raised concerns about the ? tness for purpose failures – at least in Europe – are still a regular occurrence.

of some inland navigation barges. In response, BMT Sur- veys has been tasked with investigating incidents related to Casualties structural failure of inland barges. These effort led to de? ni- The incidents in question all occurred during loading op- tive conclusions about the root causes of these problems. erations. On one occasion, a 280 ton transformer was low- ered straight onto a barge amidships and as the load came

Across the Pond off the crane and onto the barge, the vessel just folded up

The extent and variety of ships using the world’s major underneath. In another example, the push barge ‘Thor’ sud- rivers is vast. For example, the Rhine is Europe’s busiest denly collapsed and sank ten minutes after leaving its berth inland waterway, with an estimated 7,000 vessels using with a cargo of steel plate. Since old barges were involved, the river, representing a capacity of over 10 million tons. questions immediately arose about the cause of the incident.

This includes 4,500 motor cargo vessels, 1,300 tankers, And, because of the nature of brown water shipping (fresh 1,200 pushed barges and tugs and hundreds of passenger water), it is not unusual to ? nd working barges that are 30 or ferries. Some 600 vessels cross the Dutch/German border 40 years old and still ? t for purpose. Did the barge give way daily, carrying over 200 million tons of cargo annually. A due to poor construction, or was the collapse caused by faulty signi? cant part of this cargo has originated or has been loading or something else? Some older barges may indeed transshipped from the port of Rotterdam, where 133,000 suffer from degraded sections in their construction but after inland vessels called last year. By using the Rhine-Maine- making ultrasonic measurements, BMT’s surveyors generally

Danube-Black Sea Canal, cargoes from Central and North- found the steel to be within acceptable limits. As intrinsic de- ern Europe can be transported directly to the Black Sea. sign issues and structural failure were ruled out, BMT’s sur-

With a growing tendency in Europe to use inland barges veyors shifted their attention to how the vessels were loaded. for transporting many different types of cargo including In these kinds of incidents, reconstruction of the loading bulky, heavy, expensive items such as transformers or other procedures is important as these represent the last actions industrial machinery, there is also a considerable increase prior to the barge’s collapse. Reconstruction can be based in risk. If the barge is lost for any reason, the insurers’ li- on witness statements, available photographs, videos from ability will extend beyond the value of the barge and the security cams, diving inspections before salvage, etc. Sub- cost the salvage operation, to include some potentially very sequently, strength calculations of the still water bending