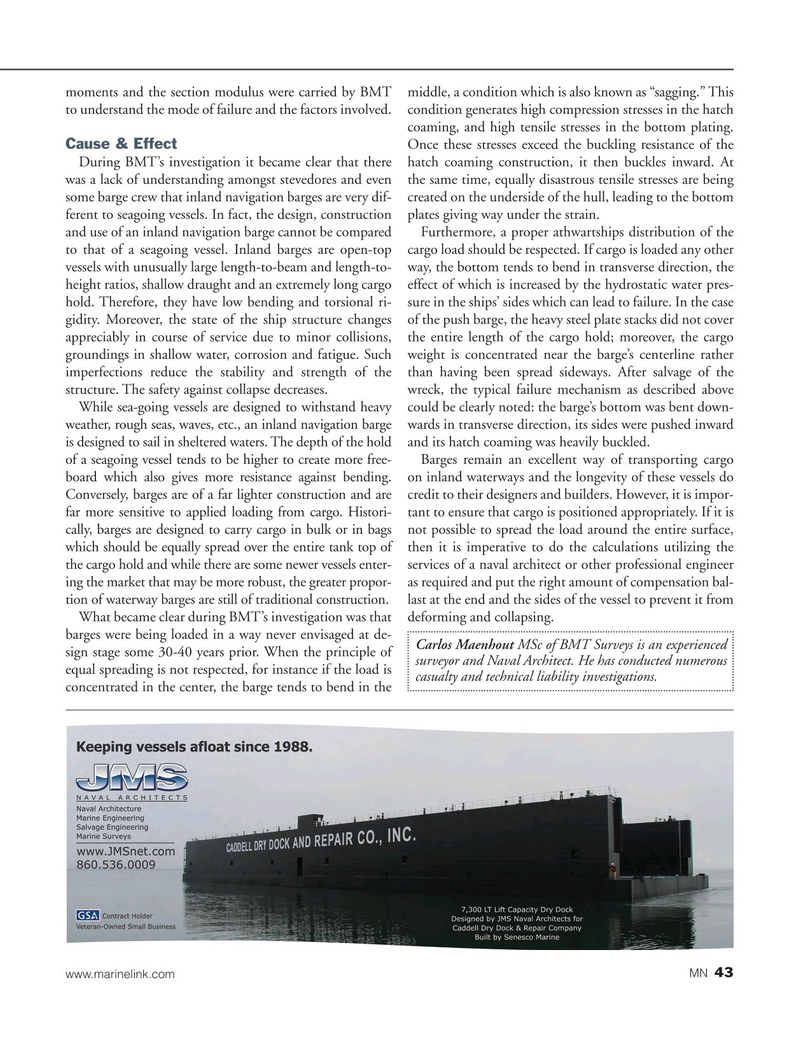 moments and the section modulus were carried by BMT middle, a condition which is also known as “sagging.” This to understand the mode of failure and the factors involved. condition generates high compression stresses in the hatch coaming, and high tensile stresses in the bottom plating.

Cause & Effect Once these stresses exceed the buckling resistance of the

During BMT’s investigation it became clear that there hatch coaming construction, it then buckles inward. At was a lack of understanding amongst stevedores and even the same time, equally disastrous tensile stresses are being some barge crew that inland navigation barges are very dif- created on the underside of the hull, leading to the bottom ferent to seagoing vessels. In fact, the design, construction plates giving way under the strain.

and use of an inland navigation barge cannot be compared Furthermore, a proper athwartships distribution of the to that of a seagoing vessel. Inland barges are open-top cargo load should be respected. If cargo is loaded any other vessels with unusually large length-to-beam and length-to- way, the bottom tends to bend in transverse direction, the height ratios, shallow draught and an extremely long cargo effect of which is increased by the hydrostatic water pres- hold. Therefore, they have low bending and torsional ri- sure in the ships’ sides which can lead to failure. In the case gidity. Moreover, the state of the ship structure changes of the push barge, the heavy steel plate stacks did not cover appreciably in course of service due to minor collisions, the entire length of the cargo hold; moreover, the cargo groundings in shallow water, corrosion and fatigue. Such weight is concentrated near the barge’s centerline rather imperfections reduce the stability and strength of the than having been spread sideways. After salvage of the structure. The safety against collapse decreases. wreck, the typical failure mechanism as described above

While sea-going vessels are designed to withstand heavy could be clearly noted: the barge’s bottom was bent down- weather, rough seas, waves, etc., an inland navigation barge wards in transverse direction, its sides were pushed inward is designed to sail in sheltered waters. The depth of the hold and its hatch coaming was heavily buckled. of a seagoing vessel tends to be higher to create more free- Barges remain an excellent way of transporting cargo board which also gives more resistance against bending. on inland waterways and the longevity of these vessels do

Conversely, barges are of a far lighter construction and are credit to their designers and builders. However, it is impor- far more sensitive to applied loading from cargo. Histori- tant to ensure that cargo is positioned appropriately. If it is cally, barges are designed to carry cargo in bulk or in bags not possible to spread the load around the entire surface, which should be equally spread over the entire tank top of then it is imperative to do the calculations utilizing the the cargo hold and while there are some newer vessels enter- services of a naval architect or other professional engineer ing the market that may be more robust, the greater propor- as required and put the right amount of compensation bal- tion of waterway barges are still of traditional construction. last at the end and the sides of the vessel to prevent it from

What became clear during BMT’s investigation was that deforming and collapsing.

barges were being loaded in a way never envisaged at de-

Carlos Maenhout MSc of BMT Surveys is an experienced sign stage some 30-40 years prior. When the principle of surveyor and Naval Architect. He has conducted numerous equal spreading is not respected, for instance if the load is casualty and technical liability investigations. concentrated in the center, the barge tends to bend in the 43 www.marinelink.com MN