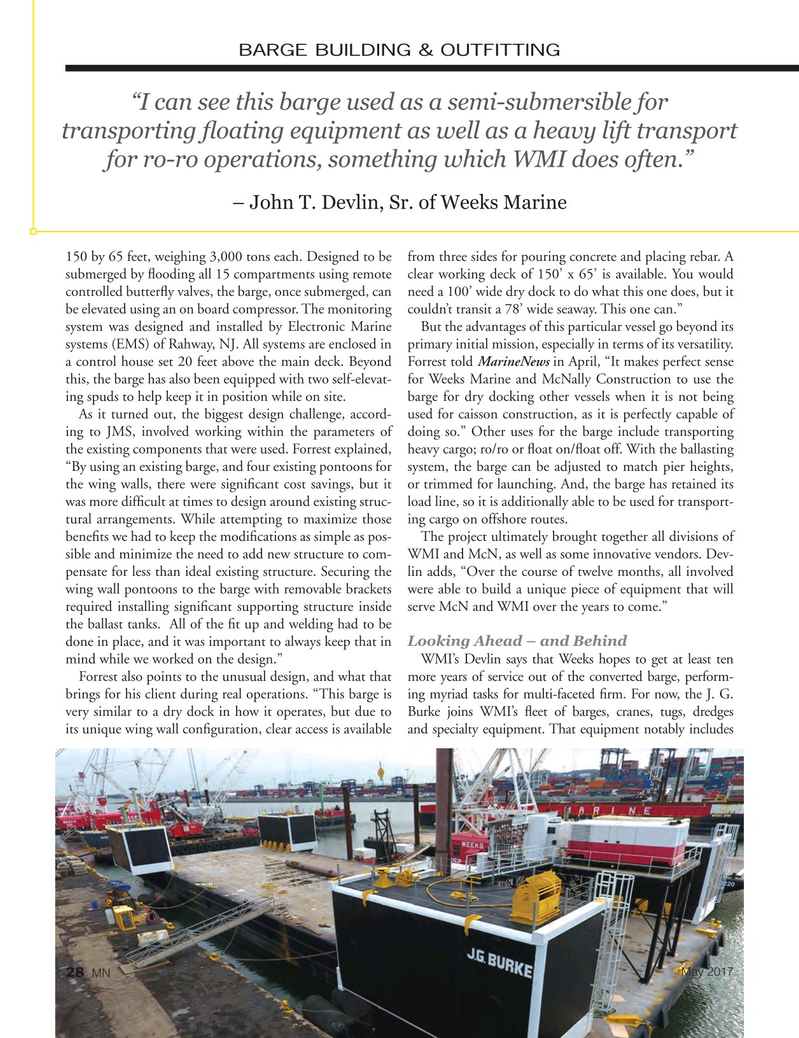 BARGE BUILDING & OUTFITTING “I can see this barge used as a semi-submersible for transporting ? oating equipment as well as a heavy lift transport for ro-ro operations, something which WMI does often.” – John T. Devlin, Sr. of Weeks Marine 150 by 65 feet, weighing 3,000 tons each. Designed to be from three sides for pouring concrete and placing rebar. A submerged by ? ooding all 15 compartments using remote clear working deck of 150’ x 65’ is available. You would controlled butter? y valves, the barge, once submerged, can need a 100’ wide dry dock to do what this one does, but it be elevated using an on board compressor. The monitoring couldn’t transit a 78’ wide seaway. This one can.” system was designed and installed by Electronic Marine But the advantages of this particular vessel go beyond its systems (EMS) of Rahway, NJ. All systems are enclosed in primary initial mission, especially in terms of its versatility. a control house set 20 feet above the main deck. Beyond Forrest told MarineNews in April, “It makes perfect sense this, the barge has also been equipped with two self-elevat- for Weeks Marine and McNally Construction to use the ing spuds to help keep it in position while on site. barge for dry docking other vessels when it is not being

As it turned out, the biggest design challenge, accord- used for caisson construction, as it is perfectly capable of ing to JMS, involved working within the parameters of doing so.” Other uses for the barge include transporting the existing components that were used. Forrest explained, heavy cargo; ro/ro or ? oat on/? oat off. With the ballasting “By using an existing barge, and four existing pontoons for system, the barge can be adjusted to match pier heights, the wing walls, there were signi? cant cost savings, but it or trimmed for launching. And, the barge has retained its was more dif? cult at times to design around existing struc- load line, so it is additionally able to be used for transport- tural arrangements. While attempting to maximize those ing cargo on offshore routes.

bene? ts we had to keep the modi? cations as simple as pos- The project ultimately brought together all divisions of sible and minimize the need to add new structure to com- WMI and McN, as well as some innovative vendors. Dev- pensate for less than ideal existing structure. Securing the lin adds, “Over the course of twelve months, all involved wing wall pontoons to the barge with removable brackets were able to build a unique piece of equipment that will required installing signi? cant supporting structure inside serve McN and WMI over the years to come.” the ballast tanks. All of the ? t up and welding had to be done in place, and it was important to always keep that in Looking Ahead – and Behind mind while we worked on the design.” WMI’s Devlin says that Weeks hopes to get at least ten

Forrest also points to the unusual design, and what that more years of service out of the converted barge, perform- brings for his client during real operations. “This barge is ing myriad tasks for multi-faceted ? rm. For now, the J. G. very similar to a dry dock in how it operates, but due to Burke joins WMI’s ? eet of barges, cranes, tugs, dredges its unique wing wall con? guration, clear access is available and specialty equipment. That equipment notably includes