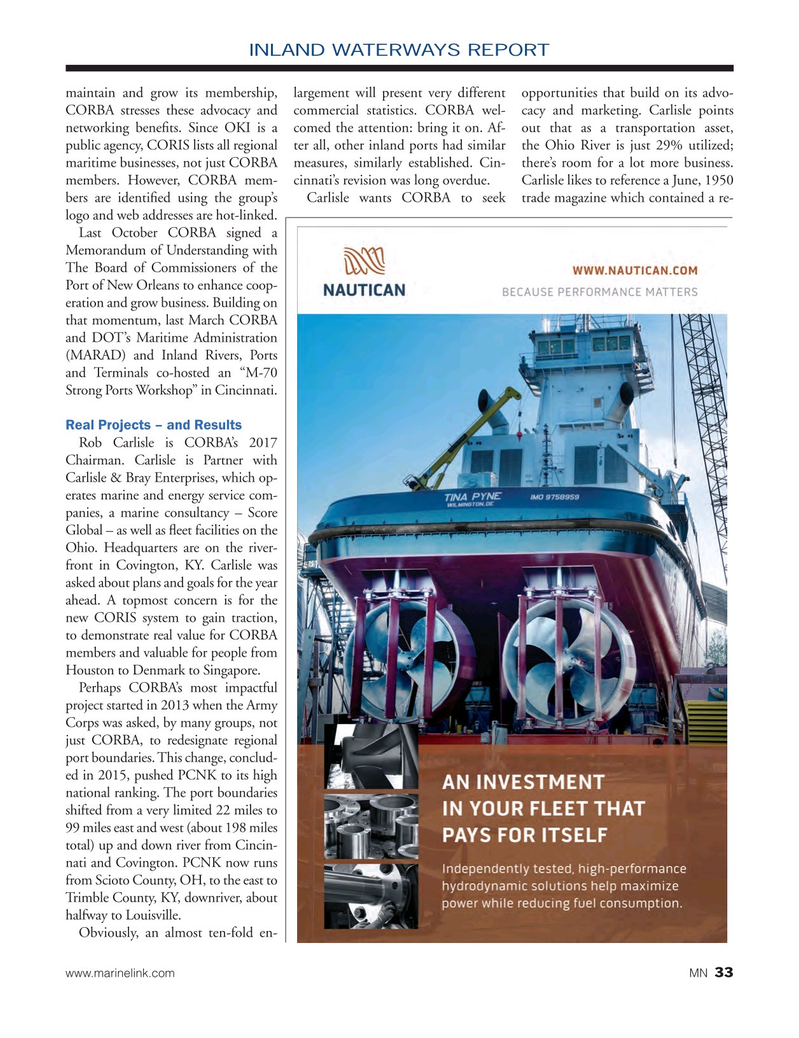 INLAND WATERWAYS REPORT maintain and grow its membership, largement will present very different opportunities that build on its advo-

CORBA stresses these advocacy and commercial statistics. CORBA wel- cacy and marketing. Carlisle points networking bene? ts. Since OKI is a comed the attention: bring it on. Af- out that as a transportation asset, public agency, CORIS lists all regional ter all, other inland ports had similar the Ohio River is just 29% utilized; maritime businesses, not just CORBA measures, similarly established. Cin- there’s room for a lot more business. members. However, CORBA mem- cinnati’s revision was long overdue. Carlisle likes to reference a June, 1950 bers are identi? ed using the group’s Carlisle wants CORBA to seek trade magazine which contained a re- logo and web addresses are hot-linked.

Memorandum of Understanding with

The Board of Commissioners of the

Chairman. Carlisle is Partner with

Global – as well as ? eet facilities on the

Ohio. Headquarters are on the river- front in Covington, KY. Carlisle was asked about plans and goals for the year ahead. A topmost concern is for the new CORIS system to gain traction, to demonstrate real value for CORBA members and valuable for people from

Houston to Denmark to Singapore.

Corps was asked, by many groups, not just CORBA, to redesignate regional port boundaries. This change, conclud- ed in 2015, pushed PCNK to its high national ranking. The port boundaries shifted from a very limited 22 miles to 99 miles east and west (about 198 miles total) up and down river from Cincin- nati and Covington. PCNK now runs from Scioto County, OH, to the east to