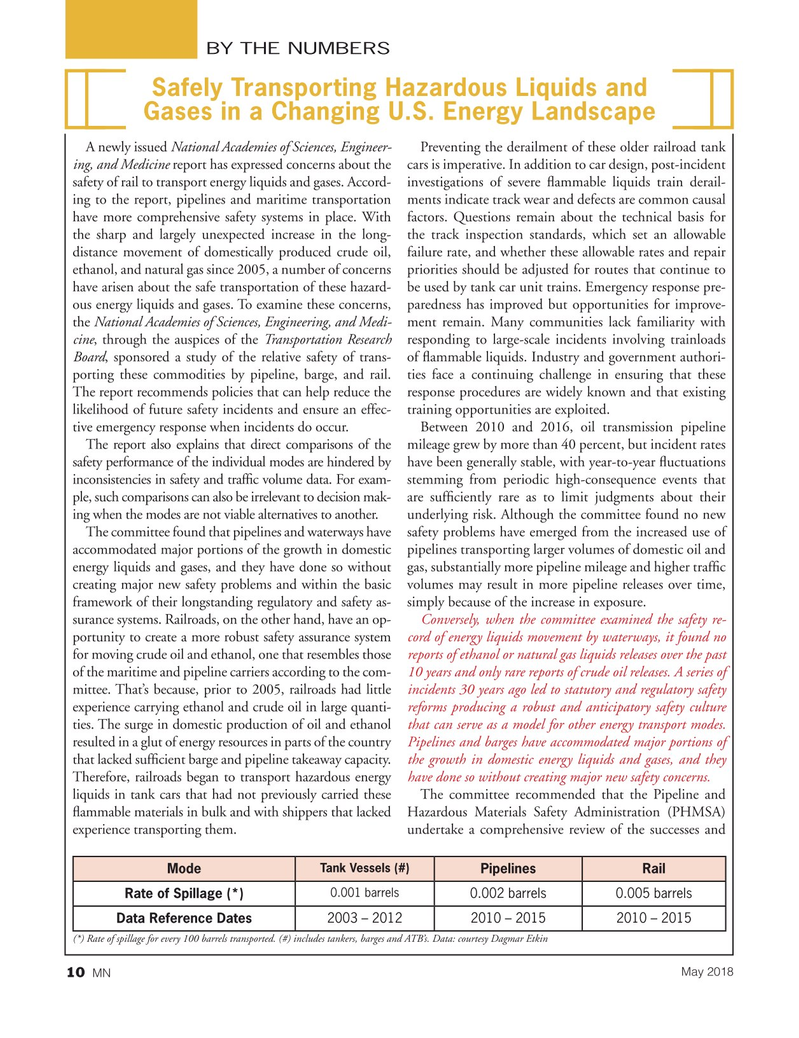 A newly issued National Academies of Sciences, Engineer- Preventing the derailment of these older railroad tank ing, and Medicine report has expressed concerns about the cars is imperative. In addition to car design, post-incident safety of rail to transport energy liquids and gases. Accord- investigations of severe ? ammable liquids train derail- ing to the report, pipelines and maritime transportation ments indicate track wear and defects are common causal have more comprehensive safety systems in place. With factors. Questions remain about the technical basis for the sharp and largely unexpected increase in the long- the track inspection standards, which set an allowable distance movement of domestically produced crude oil, failure rate, and whether these allowable rates and repair ethanol, and natural gas since 2005, a number of concerns priorities should be adjusted for routes that continue to have arisen about the safe transportation of these hazard- be used by tank car unit trains. Emergency response pre- ous energy liquids and gases. To examine these concerns, paredness has improved but opportunities for improve- the National Academies of Sciences, Engineering, and Medi- ment remain. Many communities lack familiarity with cine, through the auspices of the Transportation Research responding to large-scale incidents involving trainloads

Board, sponsored a study of the relative safety of trans- of ? ammable liquids. Industry and government authori- porting these commodities by pipeline, barge, and rail. ties face a continuing challenge in ensuring that these

The report recommends policies that can help reduce the response procedures are widely known and that existing likelihood of future safety incidents and ensure an effec- training opportunities are exploited. tive emergency response when incidents do occur. Between 2010 and 2016, oil transmission pipeline

The report also explains that direct comparisons of the mileage grew by more than 40 percent, but incident rates safety performance of the individual modes are hindered by have been generally stable, with year-to-year ? uctuations inconsistencies in safety and traf? c volume data. For exam- stemming from periodic high-consequence events that ple, such comparisons can also be irrelevant to decision mak- are suf? ciently rare as to limit judgments about their ing when the modes are not viable alternatives to another. underlying risk. Although the committee found no new

The committee found that pipelines and waterways have safety problems have emerged from the increased use of accommodated major portions of the growth in domestic pipelines transporting larger volumes of domestic oil and energy liquids and gases, and they have done so without gas, substantially more pipeline mileage and higher traf? c creating major new safety problems and within the basic volumes may result in more pipeline releases over time, framework of their longstanding regulatory and safety as- simply because of the increase in exposure.

surance systems. Railroads, on the other hand, have an op- Conversely, when the committee examined the safety re- portunity to create a more robust safety assurance system cord of energy liquids movement by waterways, it found no for moving crude oil and ethanol, one that resembles those reports of ethanol or natural gas liquids releases over the past of the maritime and pipeline carriers according to the com- 10 years and only rare reports of crude oil releases. A series of mittee. That’s because, prior to 2005, railroads had little incidents 30 years ago led to statutory and regulatory safety experience carrying ethanol and crude oil in large quanti- reforms producing a robust and anticipatory safety culture ties. The surge in domestic production of oil and ethanol that can serve as a model for other energy transport modes. resulted in a glut of energy resources in parts of the country Pipelines and barges have accommodated major portions of that lacked suf? cient barge and pipeline takeaway capacity. the growth in domestic energy liquids and gases, and they

liquids in tank cars that had not previously carried these The committee recommended that the Pipeline and ? ammable materials in bulk and with shippers that lacked Hazardous Materials Safety Administration (PHMSA) experience transporting them. undertake a comprehensive review of the successes and