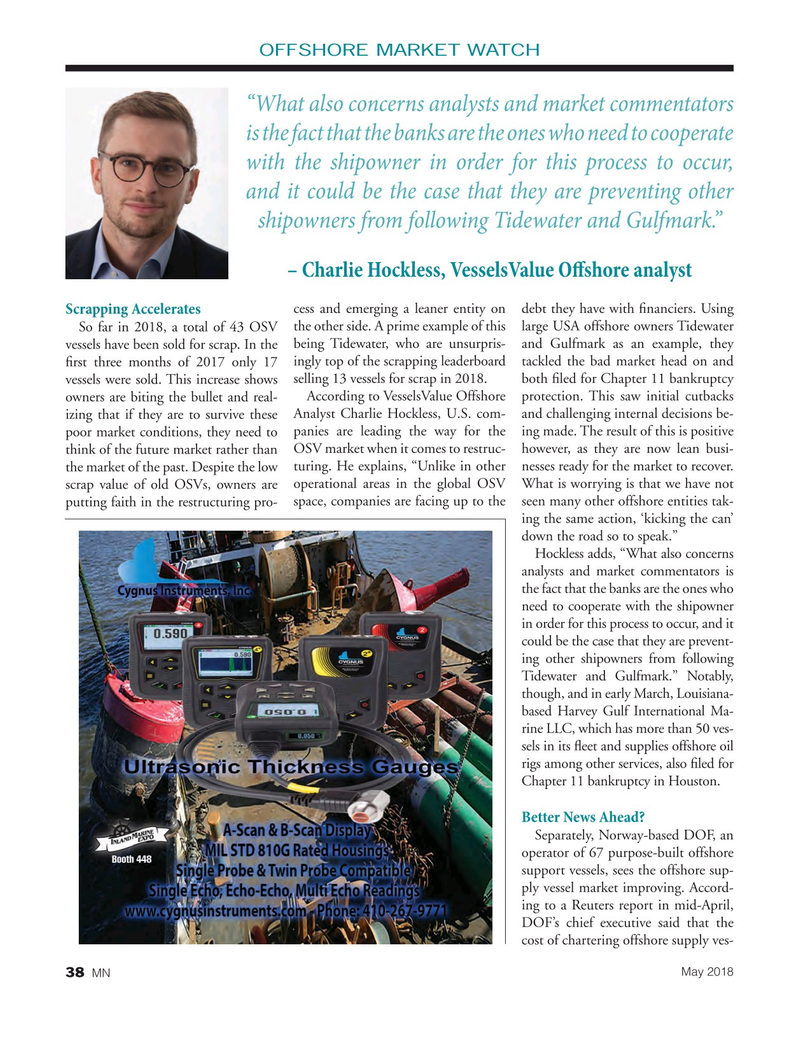 OFFSHORE MARKET WATCH “What also concerns analysts and market commentators is the fact that the banks are the ones who need to cooperate with the shipowner in order for this process to occur, and it could be the case that they are preventing other shipowners from following Tidewater and Gulfmark.” – Charlie Hockless, VesselsValue Of shore analyst cess and emerging a leaner entity on debt they have with ? nanciers. Using

So far in 2018, a total of 43 OSV the other side. A prime example of this large USA offshore owners Tidewater vessels have been sold for scrap. In the being Tidewater, who are unsurpris- and Gulfmark as an example, they ? rst three months of 2017 only 17 ingly top of the scrapping leaderboard tackled the bad market head on and vessels were sold. This increase shows selling 13 vessels for scrap in 2018. both ? led for Chapter 11 bankruptcy owners are biting the bullet and real- According to VesselsValue Offshore protection. This saw initial cutbacks izing that if they are to survive these Analyst Charlie Hockless, U.S. com- and challenging internal decisions be- poor market conditions, they need to panies are leading the way for the ing made. The result of this is positive think of the future market rather than OSV market when it comes to restruc- however, as they are now lean busi- the market of the past. Despite the low turing. He explains, “Unlike in other nesses ready for the market to recover. scrap value of old OSVs, owners are operational areas in the global OSV What is worrying is that we have not putting faith in the restructuring pro- space, companies are facing up to the seen many other offshore entities tak- ing the same action, ‘kicking the can’ down the road so to speak.”

Hockless adds, “What also concerns analysts and market commentators is the fact that the banks are the ones who need to cooperate with the shipowner in order for this process to occur, and it could be the case that they are prevent- ing other shipowners from following

Tidewater and Gulfmark.” Notably, though, and in early March, Louisiana- based Harvey Gulf International Ma- rine LLC, which has more than 50 ves- sels in its ? eet and supplies offshore oil rigs among other services, also ? led for