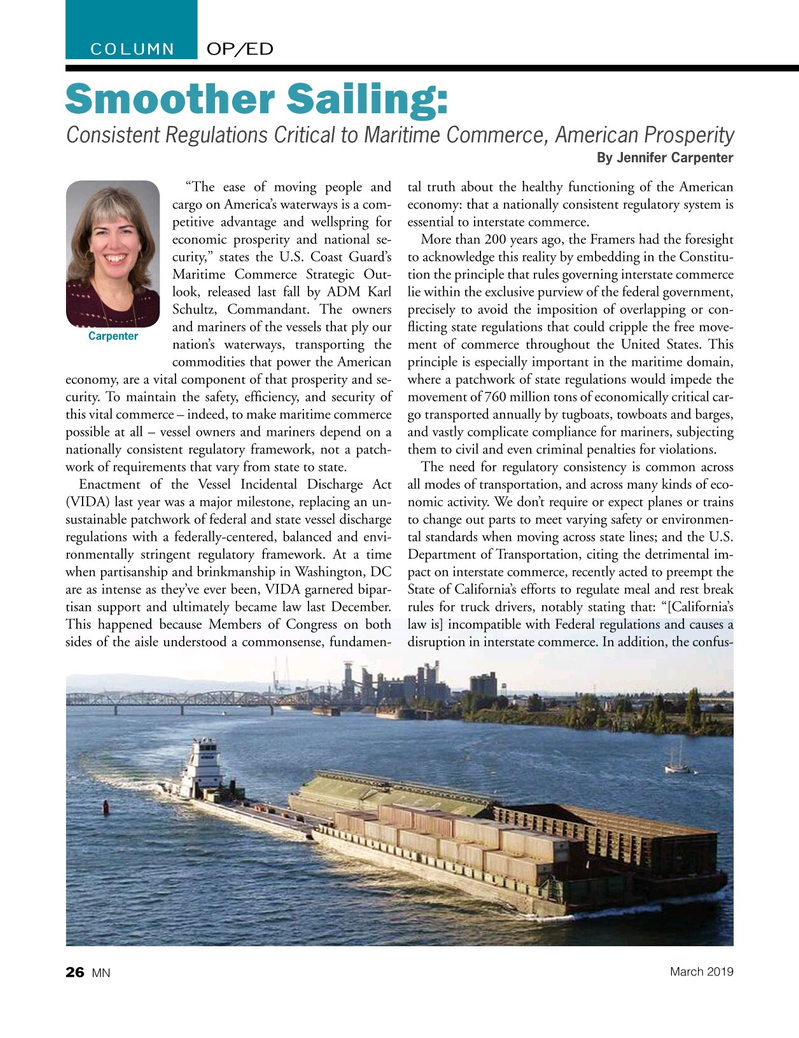 By Jennifer Carpenter “The ease of moving people and tal truth about the healthy functioning of the American cargo on America’s waterways is a com- economy: that a nationally consistent regulatory system is petitive advantage and wellspring for essential to interstate commerce.

economic prosperity and national se- More than 200 years ago, the Framers had the foresight curity,” states the U.S. Coast Guard’s to acknowledge this reality by embedding in the Constitu-

Schultz, Commandant. The owners precisely to avoid the imposition of overlapping or con- and mariners of the vessels that ply our ficting state regulations that could cripple the free move-

Carpenter nation’s waterways, transporting the ment of commerce throughout the United States. This commodities that power the American principle is especially important in the maritime domain, economy, are a vital component of that prosperity and se- where a patchwork of state regulations would impede the curity. To maintain the safety, effciency, and security of movement of 760 million tons of economically critical car- this vital commerce – indeed, to make maritime commerce go transported annually by tugboats, towboats and barges, possible at all – vessel owners and mariners depend on a and vastly complicate compliance for mariners, subjecting nationally consistent regulatory framework, not a patch- them to civil and even criminal penalties for violations. work of requirements that vary from state to state. The need for regulatory consistency is common across

Enactment of the Vessel Incidental Discharge Act all modes of transportation, and across many kinds of eco- (VIDA) last year was a major milestone, replacing an un- nomic activity. We don’t require or expect planes or trains sustainable patchwork of federal and state vessel discharge to change out parts to meet varying safety or environmen- regulations with a federally-centered, balanced and envi- tal standards when moving across state lines; and the U.S. ronmentally stringent regulatory framework. At a time Department of Transportation, citing the detrimental im- when partisanship and brinkmanship in Washington, DC pact on interstate commerce, recently acted to preempt the are as intense as they’ve ever been, VIDA garnered bipar- State of California’s efforts to regulate meal and rest break tisan support and ultimately became law last December. rules for truck drivers, notably stating that: “[California’s

This happened because Members of Congress on both law is] incompatible with Federal regulations and causes a sides of the aisle understood a commonsense, fundamen- disruption in interstate commerce. In addition, the confus-