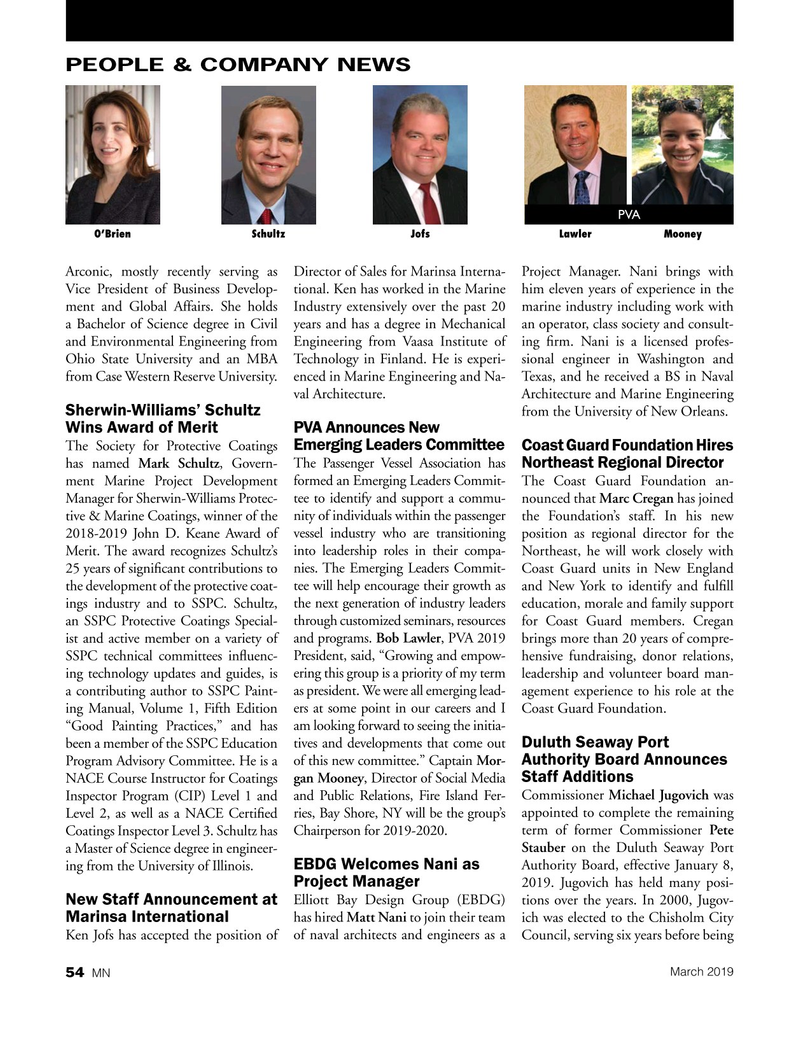 Vice President of Business Develop- tional. Ken has worked in the Marine him eleven years of experience in the ment and Global Affairs. She holds Industry extensively over the past 20 marine industry including work with a Bachelor of Science degree in Civil years and has a degree in Mechanical an operator, class society and consult- and Environmental Engineering from Engineering from Vaasa Institute of ing frm. Nani is a licensed profes-

Sherwin-Williams’ Schultz from the University of New Orleans.

The Society for Protective Coatings has named Mark Schultz, Govern- The Passenger Vessel Association has

Manager for Sherwin-Williams Protec- tee to identify and support a commu- nounced that Marc Cregan has joined tive & Marine Coatings, winner of the nity of individuals within the passenger the Foundation’s staff. In his new 2018-2019 John D. Keane Award of vessel industry who are transitioning position as regional director for the

Merit. The award recognizes Schultz’s into leadership roles in their compa- Northeast, he will work closely with 25 years of signifcant contributions to nies. The Emerging Leaders Commit- Coast Guard units in New England the development of the protective coat- tee will help encourage their growth as and New York to identify and fulfll ings industry and to SSPC. Schultz, the next generation of industry leaders education, morale and family support an SSPC Protective Coatings Special- through customized seminars, resources for Coast Guard members. Cregan ist and active member on a variety of and programs. Bob Lawler, PVA 2019 brings more than 20 years of compre-

SSPC technical committees infuenc- President, said, “Growing and empow- hensive fundraising, donor relations, ing technology updates and guides, is ering this group is a priority of my term leadership and volunteer board man- a contributing author to SSPC Paint- as president. We were all emerging lead- agement experience to his role at the ing Manual, Volume 1, Fifth Edition ers at some point in our careers and I Coast Guard Foundation. “Good Painting Practices,” and has am looking forward to seeing the initia-

Program Advisory Committee. He is a of this new committee.” Captain Mor-

Level 2, as well as a NACE Certifed ries, Bay Shore, NY will be the group’s appointed to complete the remaining

Coatings Inspector Level 3. Schultz has Chairperson for 2019-2020. term of former Commissioner Pete a Master of Science degree in engineer- Stauber on the Duluth Seaway Port

EBDG Welcomes Nani as ing from the University of Illinois. Authority Board, effective January 8,

Ken Jofs has accepted the position of of naval architects and engineers as a Council, serving six years before being