Diesel electric propulsion is a concept that uses an electrical power generation plant to deliver power to the propulsion unit. Case studies show reductions in fuel and maintenance costs with such systems. Those improvements can be further enhanced by the addition of an energy storage system to the vessel.

This case study provides a cost benefit analysis of an energy storage system for a vessel owner using a real-world operational profile and case study. It is not a deep dive into all of the aspects and details of an energy storage system. There are many configurations and options available to fit a wide variety of requirements. Naval architects can work with the systems engineers for these manufacturers to determine the best system for a particular application.

Typical Benefits of Energy Storage Systems
For typical marine applications, the use of Lithium Ion batteries (Li-ion) will add spinning reserve, peak shaving, and efficient engine loading to increase the overall efficiency of the vessels. With those system improvements, operators will experience an overall reduction in engine hours, fuel consumption, and maintenance costs while improving the responsiveness and reliability of the vessel’s propulsion system. These benefits can be realized with a variety of propulsion systems, including both Z-drives and conventional shafted propellers.

The “always online” approach to energy storage provides the best overall system performance.    With this set up, throttle response from the propulsion system can be nearly instantaneous.  The batteries provide the spinning reserve and dynamic response so the DE/ES system can deliver power even faster than mechanical propulsion systems.

Hybrid with Energy Storage
Hybrid with Energy Storage (H/ES) systems make use of a mechanically driven shaft line with a power take off and power take in (PTO/PTI) connected to a motor/generator (M/G) set. The M/G set can take power from the ships electrical system and/or energy storage to provide additional power to the propeller shaft. This system is similar to those in modern hybrid cars. A hybrid system such as this can be especially attractive as a retrofit option for existing vessels.

Life Cycle Cost Analysis
Energy Storage systems should not be considered a one-size-fits-all solution.  As with diesel electric propulsion systems, a careful study of a towboat’s operational profile should be conducted to determine the operational benefits.  Below is a real operational profile used for this case study.  This particular vessel is an 1800HP locking river towboat.

Vessel: 1800HP Locking River Towboat:
Some basic assumptions for the life cycle cost analysis include both a 365 day per year operational tempo with a 40-year vessel life cycle.

There are some minor differences in the systems. First, the total brake horsepower of each system is slightly different. The mechanical system has 1800 BHP while the DE/ES has a maximum of 2000 BHP. Another difference is the mechanical-based design has a total of four engines, with two of those engines being required to be EPA Tier IV, while the electrical propulsion design utilizes only three Tier III generators. The DE/ES system used for these calculations is a DC bus system. The system uses AC generators and AC propulsion motors.  However, the main propulsion bus is DC.  This provides for a smaller, more reliable system and cost-effective solution.

A DE/ES system does increase the initial capital costs of the towboat. This increase is equal to about $400k increase in overall construction cost of a typical 1800HP towboat.  Most of that increase is due to the costs of the batteries and associated battery equipment.

For these calculations the following assumptions were made:

The fuel savings for the DE/ES system is achieved mostly through the functions of peak shaving and efficient engine loading.  By using peak shaving and dynamic response, the overall number of engine hours can be reduced.  This has a large impact on the maintenance costs, as discussed further below.  In this life cycle analysis, the initial capital cost of the DE/ES system is nearly offset in the first year of operations.

Maintenance Costs:
Beyond fuel savings, there are significant reductions in cost on maintenance budgets with the use of energy storage systems.

Life cycle maintenance costs are based on the engine hours above with a vessel life cycle of 40 years using manufacturers recommended maintenance schedules.

Beyond Dollars and Cents
Maritime industries depend on reliable and safe operations. From the smallest towboat to the largest military ship, any vessel without a reliable power plant is a liability. Many of the industries that rely heavily on safe and reliable power, such as ferries and offshore support vessels, have moved to energy storage systems as they represent a significant jump in those areas.

While the fuel and maintenance costs are brought down with the use of peak shaving, reliable operation is enhanced with the spinning reserve and dynamic response characteristics of an energy storage solution. In the event of an engine failure, the batteries provide continuous operations while more power is brought online, effectively acting as an uninterrupted power supply (UPS) for the entire vessel.

Also, such systems can significantly reduce overhaul times. For both the diesel electric and DE/ES systems, replacing a generator performed quicker than replacing a main diesel engine. Depending on an owner’s maintenance program, carrying spare units for a vessel becomes easier as all the generators are the same. Once a unit is removed from a vessel, it can be easily overhauled in a shop without impacting the operational tempo for the vessel.

You Have Options
As with any system or technology, a DE/ES system may not be a viable solution for all vessel owners.  However, this case study shows savings over the life of the vessel can be significant with a properly designed system.

TSGI recognizes that fuel savings may not return any benefit to the vessel owners depending on contract structure. TSGI expects that the inland market will follow the same pattern that other parts of the marine industry have started to experience, with charterers and commodity owners requesting more fuel efficient vessels instead of just accepting higher fuel surcharges.

Joshua Slade Sebastian, P.E., is Engineering Manager at The Shearer Group, Inc. (TSGI). TSGI would like to thank the Marine Division at ABB for assistance with the electrical design of the concept diesel electric towboat and providing some of the technical information for this article.

This article first appeared in the May 2019 print edition of MarineNews magazine. The original article with all charts and graphs can be found by clicking the link to the magazine to find the e-magazine. 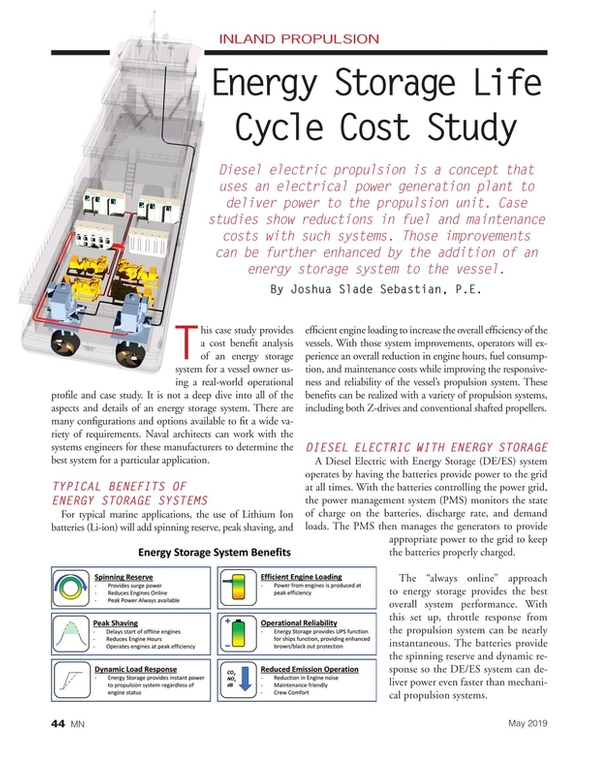