Another year; another major fleet takeover by Kirby Corporation. But the leader of the inland tank-barge sector is not growing for growth’s sake: a deeper look at the numbers shows a disciplined strategy at work.

“Kirby is definitely the big gorilla in the inland barge market,” affirmed Jefferies analyst Randy Giveans. Indeed, Houston-headquartered Kirby Corp has been extremely active buying fleets over the past few years, most recently acquiring the 63 tank barges of Cenac Marine in March for $244 million. Since the beginning of 2016, it has spent $953 million on vessel acquisitions, including $422 million for Higman Marine in 2018.

Wall Street Wonder
To understand what sets Kirby apart as a fleet buyer, consider the Wall Street connection. The company’s NYSE-listed stock has been publicly traded since 1976 and was added to the Dow Transport Index in 2012. Its market capitalization was around $4.5 billion as of early April, by far the highest among US-listed shipowners and more than double that of second-place Golar LNG.

On the debt side of the equation, Kirby is designated ‘investment grade’ by credit-rating agencies. Debt of almost all other shipping companies is rated non-investment grade, or ‘junk’. The public listing and investment-grade rating “go hand in hand”, said Evercore ISI analyst Jon Chappell. “The public listing and transparent financial statements probably give advantages as far as bank financing is concerned,” he told Marine News, adding, “Kirby’s size also gives it big advantages with bank financing.”

Giveans maintained that the public-equity component translates into the lower interest costs for both bank and bond debt. “Their liquidity and their market cap are certainly beneficial to their [debt] financing,” he said.

Chappell adds, “They’ve built this really phenomenal track record that puts them in a really good position in terms of flexibility around doing these transactions, whether it’s using traditional bank financing, public debt markets, or even finding owners who would take their stock. It gives them a huge competitive advantage.”

Its bank debt includes a $850 million revolving credit facility, which had an average of $412 million outstanding last year. The majority of its recent tank-barge purchases have been funded with this revolver. In March, Kirby pushed back the maturity of the facility from 2022 to 2024 and tacked on a new $500 million five-year term loan for “general corporate purposes and acquisitions”.

Kirby’s NYSE listing also allows for ships-for-shares deals. Kirby issued stock to pay for a portion of the 2017 purchase of S&S for its distribution-and-services division, and for part of the consideration for Penn Maritime and K-Sea Transportation in its marine-transportation division.

By using capital markets and banking access to finance takeovers, Kirby has sharply reduced the age of its inland tank-barge fleet, which in turn lowers maintenance costs to the benefit of margins. Its inland barges’ average age was 24-25 years throughout 2000-08, and has fallen ever since, down to just 13 years in 2019. In 2008, the average age of US tank barges overall was 23 years, just below Kirby’s average age. Today, the average age is 16 years, three more than Kirby’s.

In the Driver’s Seat
‘What drives fleet deals?’ is a common question on conference calls. Are they done to renew the fleet at a discount to the replacement (newbuild) cost, or to add capacity, and increase the operating leverage, i.e., exposure to rates? The data confirms that for Kirby, it’s more about replacement than incremental growth over the longer term (see chart 1).

On the latest conference call, Kirby CEO David Grzebinski estimated that the Cenac purchase price was 25-35% under replacement cost. “We are buying [Cenac’s fleet] at a significant discount to replacement value,” he explained. He described this particular deal as more about incremental growth than replacement. “If you look at our barge capacity, including Cenac, from the beginning of 2018 to now, the number of barges we have is up about 26% and the barrel capacity is up 36%. So, when you think about the earnings power of the company, it’s much higher than it has ever been, and we’re just now coming out of the bottom of the cycle,” said Grzebinski.

Asked whether Kirby favors replacement or growth, Chappell responded, “The answer is both. If there is a super-modern 50-barge fleet they could buy that would replace their existing oldest 50 barges, they would do that. But if the same 50-barge fleet was available, and there wasn’t necessarily a replacement need, if it was at the same price and the same economics, they would do that too. I don’t think they look at these acquisition candidates as just replacement or just expansion. I think they’re agnostic to that. They look at what the price is and what the potential return is.”

A key and counterintuitive aspect of Kirby’s acquisition strategy is that despite all of the money it has spent buying vessels over the past two decades, its share of the inland tank-barge market has remained relatively range-bound. While it is up to 28% today currently from 22% in 2017 – a significant two-year gain – a look further back shows that Kirby possessed 30-32% of market capacity in 2002-08.

According to Chappell, the range-bound nature of Kirby’s market share “goes back to the [capital] discipline. A lot of that [market] growth you saw over the last 10 years was people speculatively ordering barges when the US started to become a massive producer of oil and we still had the export ban in place. There was crude by rail and you couldn’t build pipelines and rail cars fast enough and it was going to barge. Then the oil price collapsed and there were more pipelines and railcars.

“But Kirby wasn’t out there speculatively ordering capacity for the sake of adding capacity – which is what a lot of existing competitors and more importantly, new entrants to the market, were doing. Everything they do – whether it’s acquiring a barge or building a barge or scrapping a barge – is about the cash-on-cash returns of that decision. That’s why they were letting market share slip away when other people were building: because it didn’t meet their return profile. They weren’t willing to chase it. And that’s why they’ve been acquisitive recently off of the bottom of the market: because they felt they could get a good entry point that would provide an adequate return over a mid-cycle basis.”

Giveans believes the relatively static nature of Kirby’s market share over time is intentional. “I think 30% is probably a very good number in terms of not cannibalizing yourself while at the same time having capacity for your customers. That’s the ‘sweet spot’. If they owned 50% of the market, they’d be competing against themselves for a lot of cargoes and a lot of fixtures.”

Asked by Marine News whether Kirby’s relatively consistent share of the inland tank-barge market was an intentional strategy, the company’s vice-president of investor relations, Eric Holcomb, declined to comment.

Competitive Advantage: scale, versatility – and leverage, too
Kirby’s current fleet scale provides a number of competitive advantages. Giveans explained how Kirby’s scale allows it to offer contracts of affreighment (COAs), wherein a certain volume of cargo is agreed to be carried over a specified time frame. “If you have a fleet of 200 barges, you probably couldn’t do COAs, because your barges might be occupied or in different parts of the inland waterway system and you couldn’t get to where you need to be in time. If you have 1,000 barges, you’re so spread out geographically that you can do COAs.”

Kirby’s size also allows it to move multiple liquid cargoes while minimizing tank-cleaning requirements. “If you have 10 barges and want to carry even three or four different commodities, there’ll be a lot of switching and cleaning required,” said Giveans. “If you have 1,000 barges, you have a lot more versatility in terms of the types of cargoes you can carry.”

Finally, Kirby’s scale gives it at least some pricing power. According to Giveans, “They have pricing power not only in the chartering of their barges, but also with vendors for fuel, spare parts, and other things.” He cited the case of a bunker supplier who used to serve Higman prior to its sale and now delivers the same volumes to Kirby – at a lower price.

Going forward, the pace of the Kirby’s fleet deals could slow compared to recent years for two reasons.

First, there are fewer large fleets left to be acquired, so Kirby will have to add capacity in smaller doses. “There really aren’t a lot of Higmans left to buy,” said Chappell.

Second, Kirby generally pursues acquisitions when markets are weak and asset prices are low, not when markets are on the upswing. Prices and rates are now rising and the demand outlook looks promising, given expected growth in US oil and petrochemical production, and the historical relationship between production and Kirby’s marine transportation revenues (see chart 3).

Secret Sauce
“Kirby’s ‘secret sauce’ over the last 30 years has been its well-timed acquisitions, how it has not overpaid when the market was really good, how it has taken advantage of stressed opportunities, and how quickly it has been able to take advantage of those opportunities when others couldn’t,” said Chappell.

“What would slow their acquisitions down is if the market starts to recover – which it already has – and if assets values went up and they felt they weren’t getting the best deal,” he continued. “Spot pricing is already up significantly off the bottom and that means asset values are probably off the bottom as well, so I would imagine there would be less stressed sellers out there than there were 12 months ago.”

“Kirby is known for acquiring when markets are tough and people are ready and willing to sell,” said Giveans. “Kirby is definitely the first call people make when they’re selling. But Kirby doesn’t buy just to buy. They buy when prices are cheap – and it’s getting a more expensive.” Will a lack of targets and improved market fundamentals slow Kirby’s acquisition pace in the period ahead? That remains to be seen.

Greg Miller is an award-winning journalist and editor. Most recently, he served as the managing editor of Fairplay magazine. Prior to his 14 years at Fairplay, he was the senior editor of Cruise Industry News and the editor in chief of the Virgin Islands Business Journal. He is a graduate of Cornell University. His work currently appears in a number of prominent shipping and energy publications. 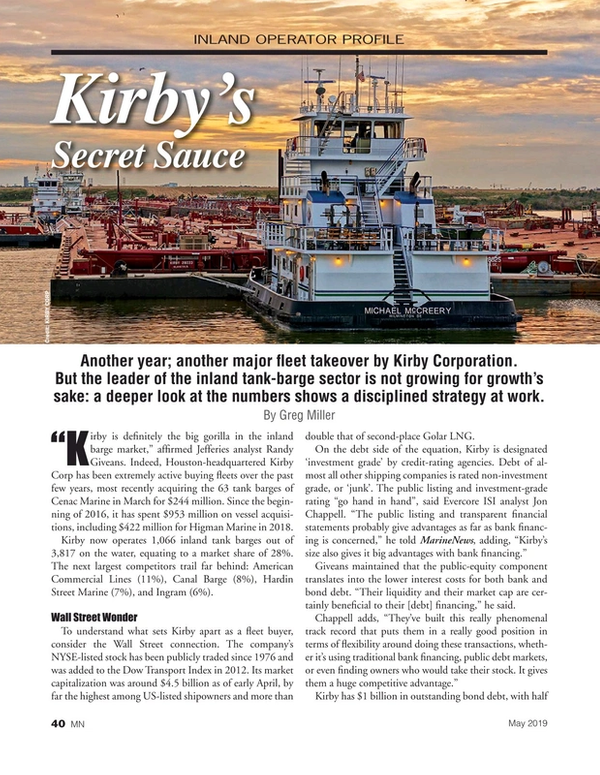