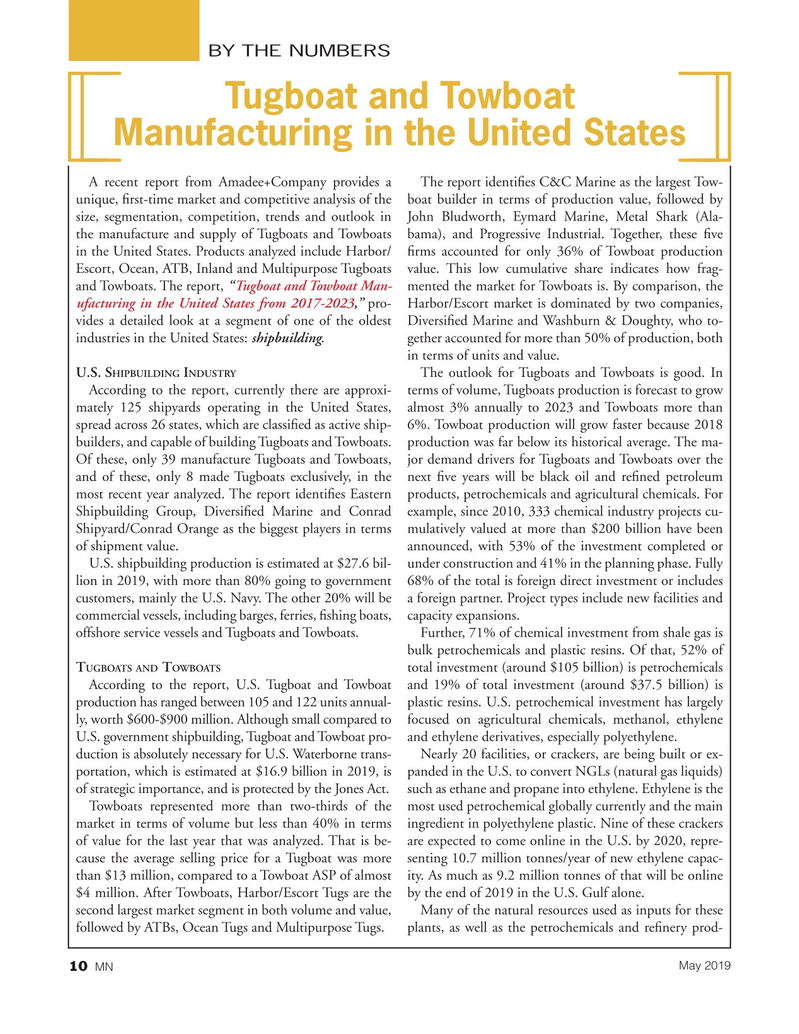 Manufacturing in the United States

A recent report from Amadee+Company provides a The report identi? es C&C Marine as the largest Tow- unique, ? rst-time market and competitive analysis of the boat builder in terms of production value, followed by size, segmentation, competition, trends and outlook in John Bludworth, Eymard Marine, Metal Shark (Ala- the manufacture and supply of Tugboats and Towboats bama), and Progressive Industrial. Together, these ? ve in the United States. Products analyzed include Harbor/ ? rms accounted for only 36% of Towboat production

Escort, Ocean, ATB, Inland and Multipurpose Tugboats value. This low cumulative share indicates how frag- and Towboats. The report, “Tugboat and Towboat Man- mented the market for Towboats is. By comparison, the ufacturing in the United States from 2017-2023,” pro- Harbor/Escort market is dominated by two companies, vides a detailed look at a segment of one of the oldest Diversi? ed Marine and Washburn & Doughty, who to- industries in the United States: shipbuilding. gether accounted for more than 50% of production, both in terms of units and value.

U.S. S I The outlook for Tugboats and Towboats is good. In

According to the report, currently there are approxi- terms of volume, Tugboats production is forecast to grow mately 125 shipyards operating in the United States, almost 3% annually to 2023 and Towboats more than spread across 26 states, which are classi? ed as active ship- 6%. Towboat production will grow faster because 2018 builders, and capable of building Tugboats and Towboats. production was far below its historical average. The ma-

Shipyard/Conrad Orange as the biggest players in terms mulatively valued at more than $200 billion have been of shipment value. announced, with 53% of the investment completed or

U.S. shipbuilding production is estimated at $27.6 bil- under construction and 41% in the planning phase. Fully lion in 2019, with more than 80% going to government 68% of the total is foreign direct investment or includes customers, mainly the U.S. Navy. The other 20% will be a foreign partner. Project types include new facilities and commercial vessels, including barges, ferries, ? shing boats, capacity expansions.

offshore service vessels and Tugboats and Towboats. Further, 71% of chemical investment from shale gas is bulk petrochemicals and plastic resins. Of that, 52% of

According to the report, U.S. Tugboat and Towboat and 19% of total investment (around $37.5 billion) is production has ranged between 105 and 122 units annual- plastic resins. U.S. petrochemical investment has largely ly, worth $600-$900 million. Although small compared to focused on agricultural chemicals, methanol, ethylene

duction is absolutely necessary for U.S. Waterborne trans- Nearly 20 facilities, or crackers, are being built or ex- portation, which is estimated at $16.9 billion in 2019, is panded in the U.S. to convert NGLs (natural gas liquids) of strategic importance, and is protected by the Jones Act. such as ethane and propane into ethylene. Ethylene is the

Towboats represented more than two-thirds of the most used petrochemical globally currently and the main market in terms of volume but less than 40% in terms ingredient in polyethylene plastic. Nine of these crackers of value for the last year that was analyzed. That is be- are expected to come online in the U.S. by 2020, repre- cause the average selling price for a Tugboat was more senting 10.7 million tonnes/year of new ethylene capac- than $13 million, compared to a Towboat ASP of almost ity. As much as 9.2 million tonnes of that will be online $4 million. After Towboats, Harbor/Escort Tugs are the by the end of 2019 in the U.S. Gulf alone. second largest market segment in both volume and value, Many of the natural resources used as inputs for these followed by ATBs, Ocean Tugs and Multipurpose Tugs. plants, as well as the petrochemicals and re? nery prod-