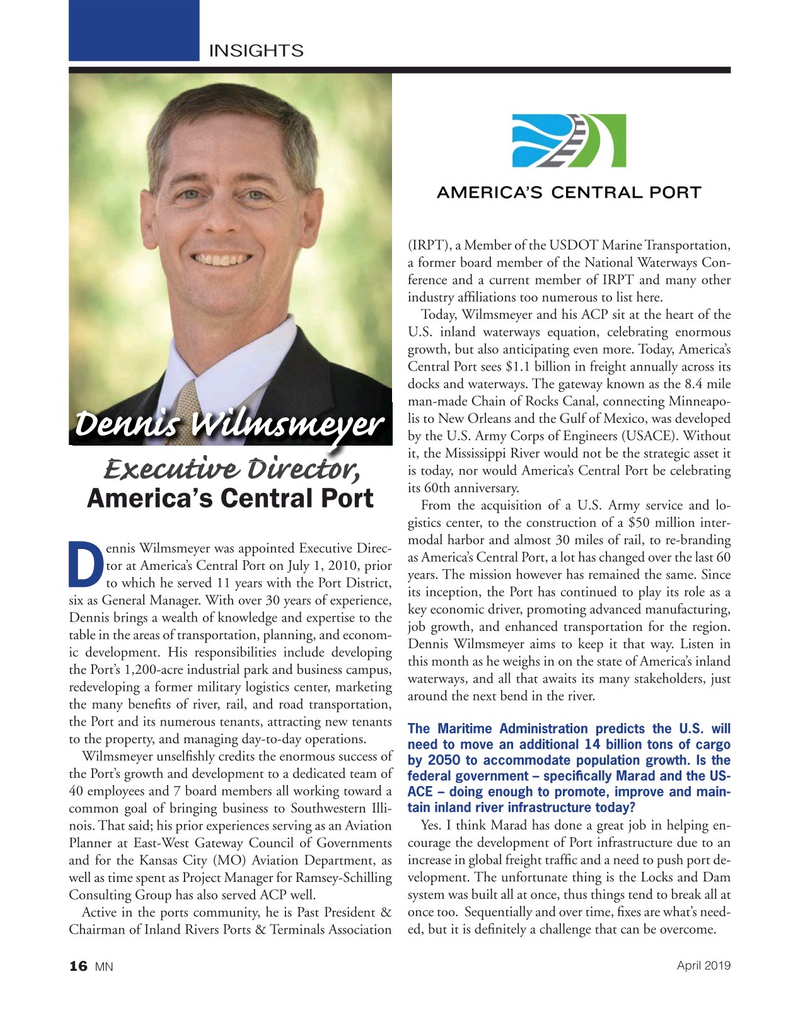 INSIGHTS (IRPT), a Member of the USDOT Marine Transportation, a former board member of the National Waterways Con- ference and a current member of IRPT and many other industry af? liations too numerous to list here.

Today, Wilmsmeyer and his ACP sit at the heart of the

Central Port sees $1.1 billion in freight annually across its docks and waterways. The gateway known as the 8.4 mile man-made Chain of Rocks Canal, connecting Minneapo- lis to New Orleans and the Gulf of Mexico, was developed

Dennis Wilmsmeyer by the U.S. Army Corps of Engineers (USACE). Without it, the Mississippi River would not be the strategic asset it is today, nor would America’s Central Port be celebrating

From the acquisition of a U.S. Army service and lo- gistics center, to the construction of a $50 million inter- modal harbor and almost 30 miles of rail, to re-branding ennis Wilmsmeyer was appointed Executive Direc- as America’s Central Port, a lot has changed over the last 60 tor at America’s Central Port on July 1, 2010, prior

Dto which he served 11 years with the Port District, years. The mission however has remained the same. Since its inception, the Port has continued to play its role as a six as General Manager. With over 30 years of experience,

Dennis brings a wealth of knowledge and expertise to the key economic driver, promoting advanced manufacturing, job growth, and enhanced transportation for the region. table in the areas of transportation, planning, and econom- ic development. His responsibilities include developing Dennis Wilmsmeyer aims to keep it that way. Listen in this month as he weighs in on the state of America’s inland the Port’s 1,200-acre industrial park and business campus, redeveloping a former military logistics center, marketing waterways, and all that awaits its many stakeholders, just the many bene? ts of river, rail, and road transportation, around the next bend in the river.

the Port and its numerous tenants, attracting new tenants

The Maritime Administration predicts the U.S. will to the property, and managing day-to-day operations.

need to move an additional 14 billion tons of cargo

Wilmsmeyer unsel? shly credits the enormous success of by 2050 to accommodate population growth. Is the the Port’s growth and development to a dedicated team of federal government – speci? cally Marad and the US- 40 employees and 7 board members all working toward a

common goal of bringing business to Southwestern Illi- nois. That said; his prior experiences serving as an Aviation Yes. I think Marad has done a great job in helping en-

Planner at East-West Gateway Council of Governments courage the development of Port infrastructure due to an and for the Kansas City (MO) Aviation Department, as increase in global freight traf? c and a need to push port de- well as time spent as Project Manager for Ramsey-Schilling velopment. The unfortunate thing is the Locks and Dam

Consulting Group has also served ACP well. system was built all at once, thus things tend to break all at

Active in the ports community, he is Past President & once too. Sequentially and over time, ? xes are what’s need-

Chairman of Inland Rivers Ports & Terminals Association ed, but it is de? nitely a challenge that can be overcome.