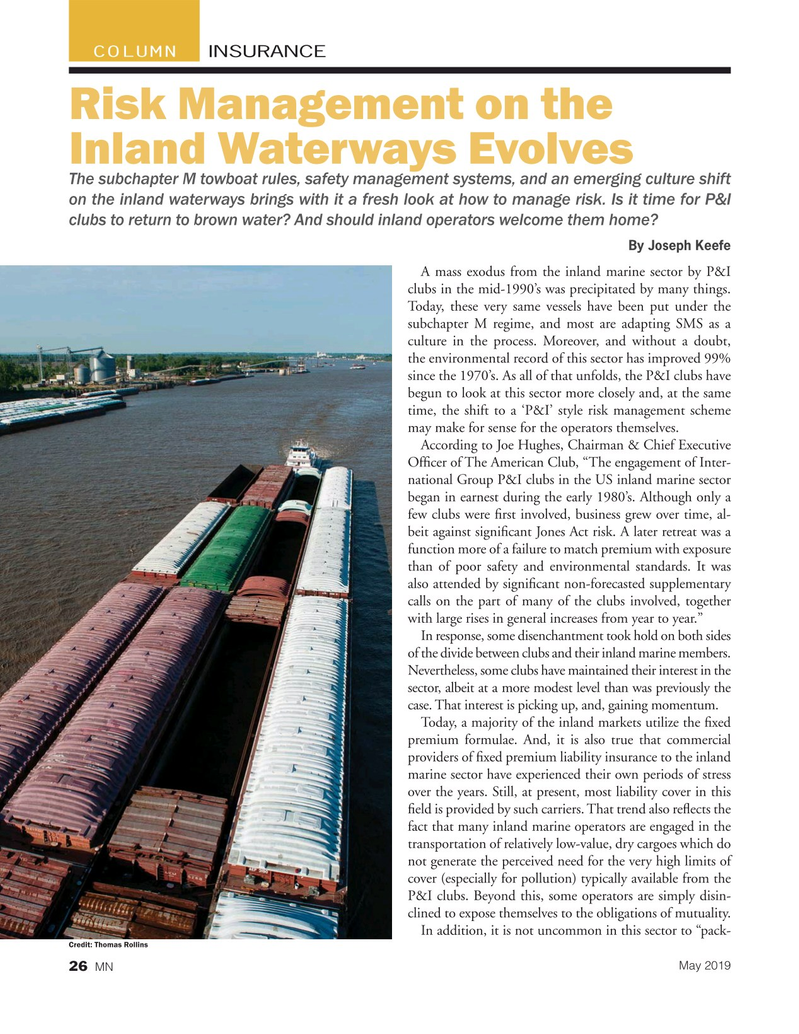 Risk Management on the

The subchapter M towboat rules, safety management systems, and an emerging culture shift on the inland waterways brings with it a fresh look at how to manage risk. Is it time for P&I clubs to return to brown water? And should inland operators welcome them home?

A mass exodus from the inland marine sector by P&I clubs in the mid-1990’s was precipitated by many things.

Today, these very same vessels have been put under the subchapter M regime, and most are adapting SMS as a culture in the process. Moreover, and without a doubt, the environmental record of this sector has improved 99% since the 1970’s. As all of that unfolds, the P&I clubs have begun to look at this sector more closely and, at the same time, the shift to a ‘P&I’ style risk management scheme may make for sense for the operators themselves.

Of? cer of The American Club, “The engagement of Inter- national Group P&I clubs in the US inland marine sector began in earnest during the early 1980’s. Although only a few clubs were ? rst involved, business grew over time, al- beit against signi? cant Jones Act risk. A later retreat was a function more of a failure to match premium with exposure than of poor safety and environmental standards. It was also attended by signi? cant non-forecasted supplementary calls on the part of many of the clubs involved, together with large rises in general increases from year to year.”

In response, some disenchantment took hold on both sides of the divide between clubs and their inland marine members.

Nevertheless, some clubs have maintained their interest in the sector, albeit at a more modest level than was previously the case. That interest is picking up, and, gaining momentum.

Today, a majority of the inland markets utilize the ? xed premium formulae. And, it is also true that commercial providers of ? xed premium liability insurance to the inland marine sector have experienced their own periods of stress over the years. Still, at present, most liability cover in this ? eld is provided by such carriers. That trend also re? ects the fact that many inland marine operators are engaged in the transportation of relatively low-value, dry cargoes which do not generate the perceived need for the very high limits of cover (especially for pollution) typically available from the

P&I clubs. Beyond this, some operators are simply disin- clined to expose themselves to the obligations of mutuality.

In addition, it is not uncommon in this sector to “pack-