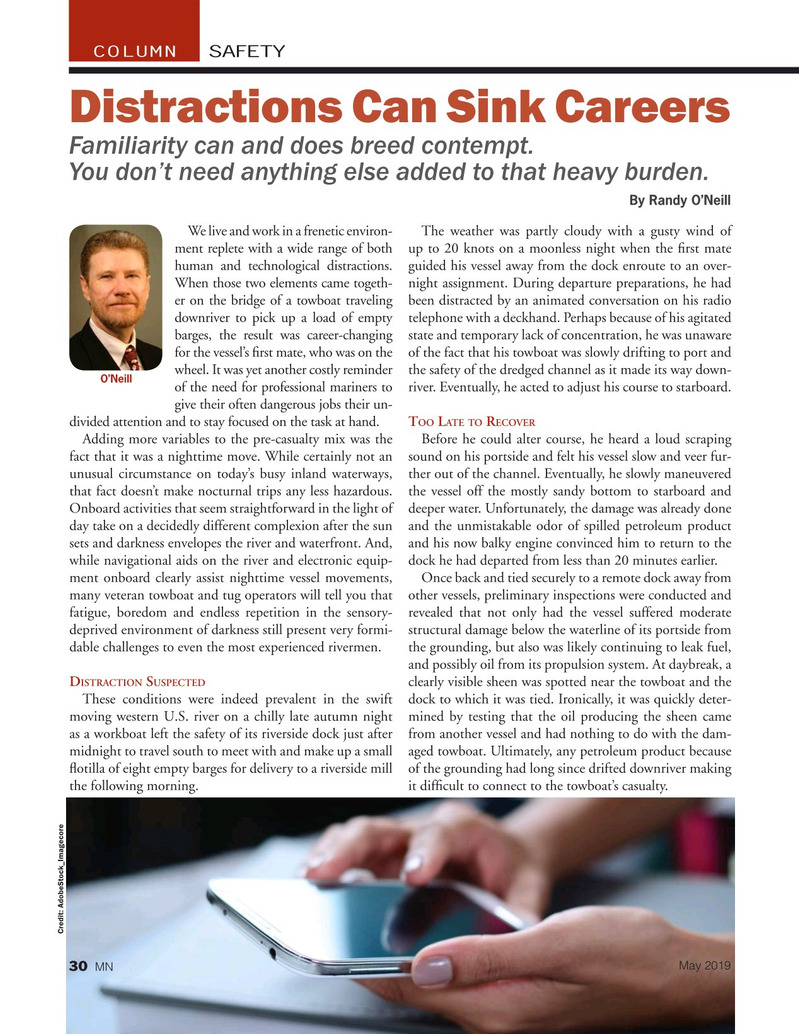 Familiarity can and does breed contempt.

You don’t need anything else added to that heavy burden.

We live and work in a frenetic environ- The weather was partly cloudy with a gusty wind of ment replete with a wide range of both up to 20 knots on a moonless night when the ? rst mate human and technological distractions. guided his vessel away from the dock enroute to an over-

When those two elements came togeth- night assignment. During departure preparations, he had er on the bridge of a towboat traveling been distracted by an animated conversation on his radio downriver to pick up a load of empty telephone with a deckhand. Perhaps because of his agitated barges, the result was career-changing state and temporary lack of concentration, he was unaware for the vessel’s ? rst mate, who was on the of the fact that his towboat was slowly drifting to port and wheel. It was yet another costly reminder the safety of the dredged channel as it made its way down-

O’Neill of the need for professional mariners to river. Eventually, he acted to adjust his course to starboard.

give their often dangerous jobs their un-

OO ATE TO ECOVER divided attention and to stay focused on the task at hand. T L R

Adding more variables to the pre-casualty mix was the Before he could alter course, he heard a loud scraping fact that it was a nighttime move. While certainly not an sound on his portside and felt his vessel slow and veer fur- unusual circumstance on today’s busy inland waterways, ther out of the channel. Eventually, he slowly maneuvered that fact doesn’t make nocturnal trips any less hazardous. the vessel off the mostly sandy bottom to starboard and

Onboard activities that seem straightforward in the light of deeper water. Unfortunately, the damage was already done day take on a decidedly different complexion after the sun and the unmistakable odor of spilled petroleum product sets and darkness envelopes the river and waterfront. And, and his now balky engine convinced him to return to the while navigational aids on the river and electronic equip- dock he had departed from less than 20 minutes earlier.

ment onboard clearly assist nighttime vessel movements, Once back and tied securely to a remote dock away from many veteran towboat and tug operators will tell you that other vessels, preliminary inspections were conducted and fatigue, boredom and endless repetition in the sensory- revealed that not only had the vessel suffered moderate deprived environment of darkness still present very formi- structural damage below the waterline of its portside from dable challenges to even the most experienced rivermen. the grounding, but also was likely continuing to leak fuel, and possibly oil from its propulsion system. At daybreak, a

These conditions were indeed prevalent in the swift dock to which it was tied. Ironically, it was quickly deter- moving western U.S. river on a chilly late autumn night mined by testing that the oil producing the sheen came as a workboat left the safety of its riverside dock just after from another vessel and had nothing to do with the dam- midnight to travel south to meet with and make up a small aged towboat. Ultimately, any petroleum product because ? otilla of eight empty barges for delivery to a riverside mill of the grounding had long since drifted downriver making the following morning. it dif? cult to connect to the towboat’s casualty.