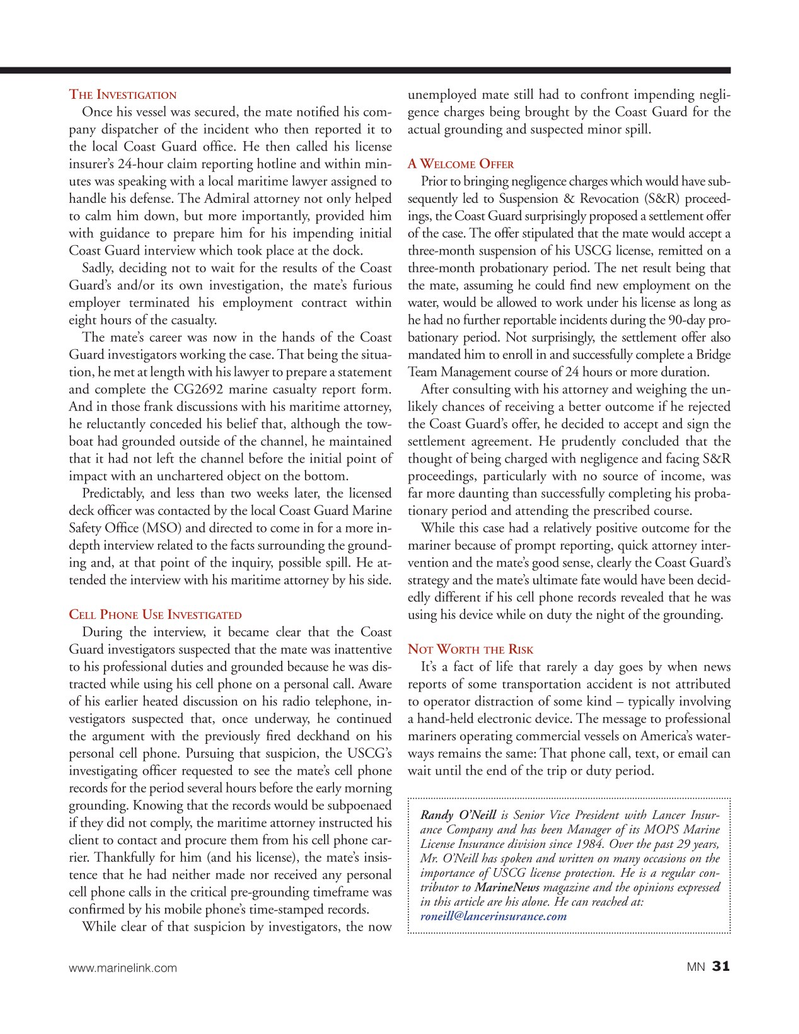 T I unemployed mate still had to confront impending negli-

Once his vessel was secured, the mate noti? ed his com- gence charges being brought by the Coast Guard for the pany dispatcher of the incident who then reported it to actual grounding and suspected minor spill. the local Coast Guard of? ce. He then called his license

ELCOME FFER insurer’s 24-hour claim reporting hotline and within min- A W O utes was speaking with a local maritime lawyer assigned to Prior to bringing negligence charges which would have sub- handle his defense. The Admiral attorney not only helped sequently led to Suspension & Revocation (S&R) proceed- to calm him down, but more importantly, provided him ings, the Coast Guard surprisingly proposed a settlement offer with guidance to prepare him for his impending initial of the case. The offer stipulated that the mate would accept a

Coast Guard interview which took place at the dock. three-month suspension of his USCG license, remitted on a

Sadly, deciding not to wait for the results of the Coast three-month probationary period. The net result being that

Guard’s and/or its own investigation, the mate’s furious the mate, assuming he could ? nd new employment on the employer terminated his employment contract within water, would be allowed to work under his license as long as eight hours of the casualty. he had no further reportable incidents during the 90-day pro-

The mate’s career was now in the hands of the Coast bationary period. Not surprisingly, the settlement offer also

Guard investigators working the case. That being the situa- mandated him to enroll in and successfully complete a Bridge tion, he met at length with his lawyer to prepare a statement Team Management course of 24 hours or more duration.

and complete the CG2692 marine casualty report form. After consulting with his attorney and weighing the un-

And in those frank discussions with his maritime attorney, likely chances of receiving a better outcome if he rejected he reluctantly conceded his belief that, although the tow- the Coast Guard’s offer, he decided to accept and sign the boat had grounded outside of the channel, he maintained settlement agreement. He prudently concluded that the that it had not left the channel before the initial point of thought of being charged with negligence and facing S&R impact with an unchartered object on the bottom. proceedings, particularly with no source of income, was

Predictably, and less than two weeks later, the licensed far more daunting than successfully completing his proba- deck of? cer was contacted by the local Coast Guard Marine tionary period and attending the prescribed course.

Safety Of? ce (MSO) and directed to come in for a more in- While this case had a relatively positive outcome for the depth interview related to the facts surrounding the ground- mariner because of prompt reporting, quick attorney inter- ing and, at that point of the inquiry, possible spill. He at- vention and the mate’s good sense, clearly the Coast Guard’s tended the interview with his maritime attorney by his side. strategy and the mate’s ultimate fate would have been decid- edly different if his cell phone records revealed that he was

C P U I using his device while on duty the night of the grounding.

During the interview, it became clear that the Coast

OT ORTH THE ISK to his professional duties and grounded because he was dis- It’s a fact of life that rarely a day goes by when news tracted while using his cell phone on a personal call. Aware reports of some transportation accident is not attributed of his earlier heated discussion on his radio telephone, in- to operator distraction of some kind – typically involving vestigators suspected that, once underway, he continued a hand-held electronic device. The message to professional the argument with the previously ? red deckhand on his mariners operating commercial vessels on America’s water- personal cell phone. Pursuing that suspicion, the USCG’s ways remains the same: That phone call, text, or email can investigating of? cer requested to see the mate’s cell phone wait until the end of the trip or duty period. records for the period several hours before the early morning grounding. Knowing that the records would be subpoenaed

Randy O’Neill is Senior Vice President with Lancer Insur- if they did not comply, the maritime attorney instructed his ance Company and has been Manager of its MOPS Marine client to contact and procure them from his cell phone car-

License Insurance division since 1984. Over the past 29 years, rier. Thankfully for him (and his license), the mate’s insis-

Mr. O’Neill has spoken and written on many occasions on the importance of USCG license protection. He is a regular con- tence that he had neither made nor received any personal tributor to MarineNews magazine and the opinions expressed cell phone calls in the critical pre-grounding timeframe was in this article are his alone. He can reached at: con? rmed by his mobile phone’s time-stamped records.

While clear of that suspicion by investigators, the now 31 www.marinelink.com MN