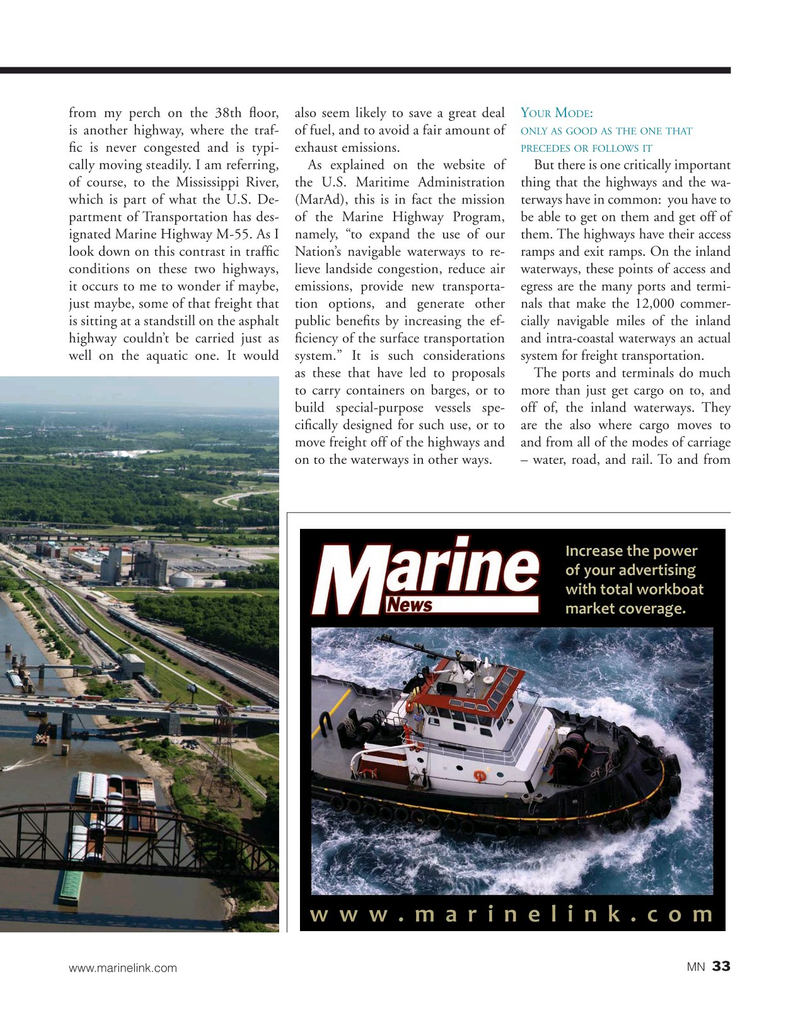 from my perch on the 38th ? oor, also seem likely to save a great deal Y M : OUR ODE is another highway, where the traf- of fuel, and to avoid a fair amount of ONLY AS GOOD AS THE ONE THAT ? c is never congested and is typi- exhaust emissions. PRECEDES OR FOLLOWS IT cally moving steadily. I am referring, As explained on the website of But there is one critically important of course, to the Mississippi River, the U.S. Maritime Administration thing that the highways and the wa- which is part of what the U.S. De- (MarAd), this is in fact the mission terways have in common: you have to partment of Transportation has des- of the Marine Highway Program, be able to get on them and get off of ignated Marine Highway M-55. As I namely, “to expand the use of our them. The highways have their access look down on this contrast in traf? c Nation’s navigable waterways to re- ramps and exit ramps. On the inland conditions on these two highways, lieve landside congestion, reduce air waterways, these points of access and it occurs to me to wonder if maybe, emissions, provide new transporta- egress are the many ports and termi- just maybe, some of that freight that tion options, and generate other nals that make the 12,000 commer- is sitting at a standstill on the asphalt public bene? ts by increasing the ef- cially navigable miles of the inland highway couldn’t be carried just as ? ciency of the surface transportation and intra-coastal waterways an actual well on the aquatic one. It would system.” It is such considerations system for freight transportation.

as these that have led to proposals The ports and terminals do much to carry containers on barges, or to more than just get cargo on to, and build special-purpose vessels spe- off of, the inland waterways. They ci? cally designed for such use, or to are the also where cargo moves to move freight off of the highways and and from all of the modes of carriage on to the waterways in other ways. – water, road, and rail. To and from 33 www.marinelink.com MN