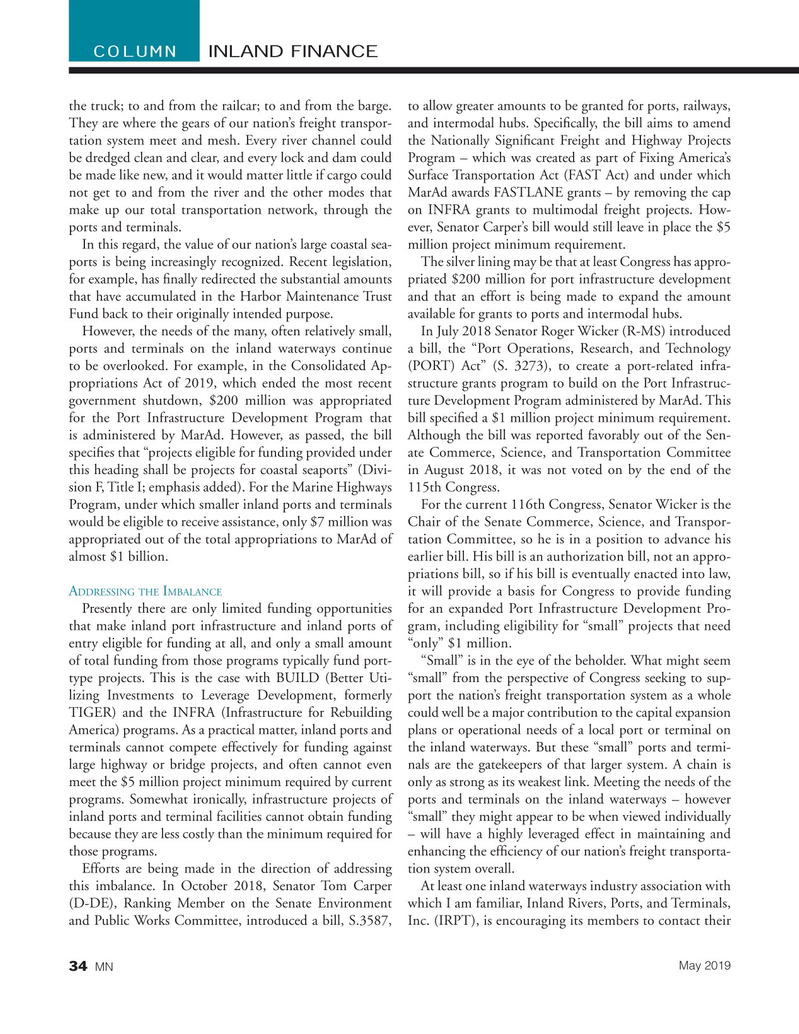 They are where the gears of our nation’s freight transpor- and intermodal hubs. Speci? cally, the bill aims to amend tation system meet and mesh. Every river channel could the Nationally Signi? cant Freight and Highway Projects be dredged clean and clear, and every lock and dam could Program – which was created as part of Fixing America’s be made like new, and it would matter little if cargo could Surface Transportation Act (FAST Act) and under which not get to and from the river and the other modes that MarAd awards FASTLANE grants – by removing the cap make up our total transportation network, through the on INFRA grants to multimodal freight projects. How- ports and terminals. ever, Senator Carper’s bill would still leave in place the $5

In this regard, the value of our nation’s large coastal sea- million project minimum requirement.

ports is being increasingly recognized. Recent legislation, The silver lining may be that at least Congress has appro- for example, has ? nally redirected the substantial amounts priated $200 million for port infrastructure development that have accumulated in the Harbor Maintenance Trust and that an effort is being made to expand the amount

Fund back to their originally intended purpose. available for grants to ports and intermodal hubs.

However, the needs of the many, often relatively small, In July 2018 Senator Roger Wicker (R-MS) introduced ports and terminals on the inland waterways continue a bill, the “Port Operations, Research, and Technology to be overlooked. For example, in the Consolidated Ap- (PORT) Act” (S. 3273), to create a port-related infra- propriations Act of 2019, which ended the most recent structure grants program to build on the Port Infrastruc- government shutdown, $200 million was appropriated ture Development Program administered by MarAd. This for the Port Infrastructure Development Program that bill speci? ed a $1 million project minimum requirement. is administered by MarAd. However, as passed, the bill Although the bill was reported favorably out of the Sen- speci? es that “projects eligible for funding provided under ate Commerce, Science, and Transportation Committee this heading shall be projects for coastal seaports” (Divi- in August 2018, it was not voted on by the end of the sion F, Title I; emphasis added). For the Marine Highways 115th Congress.

Program, under which smaller inland ports and terminals For the current 116th Congress, Senator Wicker is the would be eligible to receive assistance, only $7 million was Chair of the Senate Commerce, Science, and Transpor- appropriated out of the total appropriations to MarAd of tation Committee, so he is in a position to advance his almost $1 billion. earlier bill. His bill is an authorization bill, not an appro- priations bill, so if his bill is eventually enacted into law,

Presently there are only limited funding opportunities for an expanded Port Infrastructure Development Pro- that make inland port infrastructure and inland ports of gram, including eligibility for “small” projects that need entry eligible for funding at all, and only a small amount “only” $1 million.

of total funding from those programs typically fund port- “Small” is in the eye of the beholder. What might seem type projects. This is the case with BUILD (Better Uti- “small” from the perspective of Congress seeking to sup- lizing Investments to Leverage Development, formerly port the nation’s freight transportation system as a whole

America) programs. As a practical matter, inland ports and plans or operational needs of a local port or terminal on terminals cannot compete effectively for funding against the inland waterways. But these “small” ports and termi- large highway or bridge projects, and often cannot even nals are the gatekeepers of that larger system. A chain is meet the $5 million project minimum required by current only as strong as its weakest link. Meeting the needs of the programs. Somewhat ironically, infrastructure projects of ports and terminals on the inland waterways – however inland ports and terminal facilities cannot obtain funding “small” they might appear to be when viewed individually because they are less costly than the minimum required for – will have a highly leveraged effect in maintaining and those programs. enhancing the ef? ciency of our nation’s freight transporta-

Efforts are being made in the direction of addressing tion system overall.

this imbalance. In October 2018, Senator Tom Carper At least one inland waterways industry association with (D-DE), Ranking Member on the Senate Environment which I am familiar, Inland Rivers, Ports, and Terminals, and Public Works Committee, introduced a bill, S.3587, Inc. (IRPT), is encouraging its members to contact their