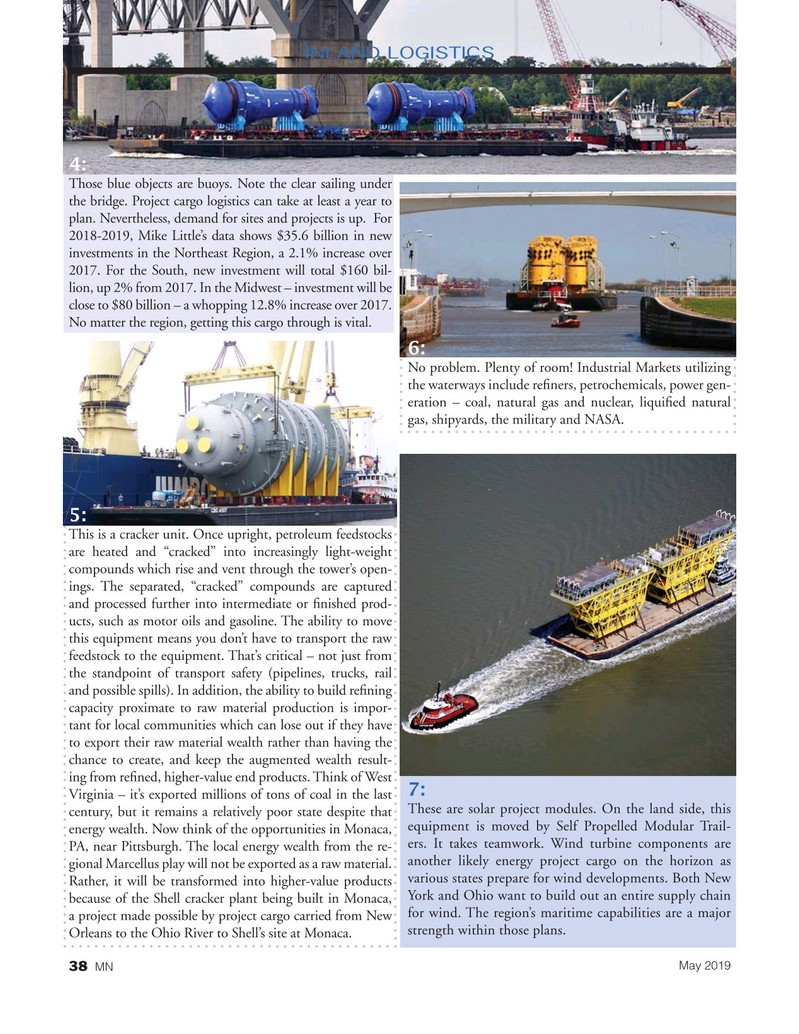 Those blue objects are buoys. Note the clear sailing under the bridge. Project cargo logistics can take at least a year to plan. Nevertheless, demand for sites and projects is up. For 2018-2019, Mike Little’s data shows $35.6 billion in new investments in the Northeast Region, a 2.1% increase over 2017. For the South, new investment will total $160 bil- lion, up 2% from 2017. In the Midwest – investment will be close to $80 billion – a whopping 12.8% increase over 2017.

No matter the region, getting this cargo through is vital. 6:

This is a cracker unit. Once upright, petroleum feedstocks are heated and “cracked” into increasingly light-weight compounds which rise and vent through the tower’s open- ings. The separated, “cracked” compounds are captured and processed further into intermediate or ? nished prod- ucts, such as motor oils and gasoline. The ability to move this equipment means you don’t have to transport the raw feedstock to the equipment. That’s critical – not just from the standpoint of transport safety (pipelines, trucks, rail and possible spills). In addition, the ability to build re? ning capacity proximate to raw material production is impor- tant for local communities which can lose out if they have to export their raw material wealth rather than having the chance to create, and keep the augmented wealth result- ing from re? ned, higher-value end products. Think of West 7:

Virginia – it’s exported millions of tons of coal in the last century, but it remains a relatively poor state despite that These are solar project modules. On the land side, this energy wealth. Now think of the opportunities in Monaca, equipment is moved by Self Propelled Modular Trail- ers. It takes teamwork. Wind turbine components are

PA, near Pittsburgh. The local energy wealth from the re- gional Marcellus play will not be exported as a raw material. another likely energy project cargo on the horizon as

Rather, it will be transformed into higher-value products various states prepare for wind developments. Both New because of the Shell cracker plant being built in Monaca, York and Ohio want to build out an entire supply chain a project made possible by project cargo carried from New for wind. The region’s maritime capabilities are a major strength within those plans.

Orleans to the Ohio River to Shell’s site at Monaca.