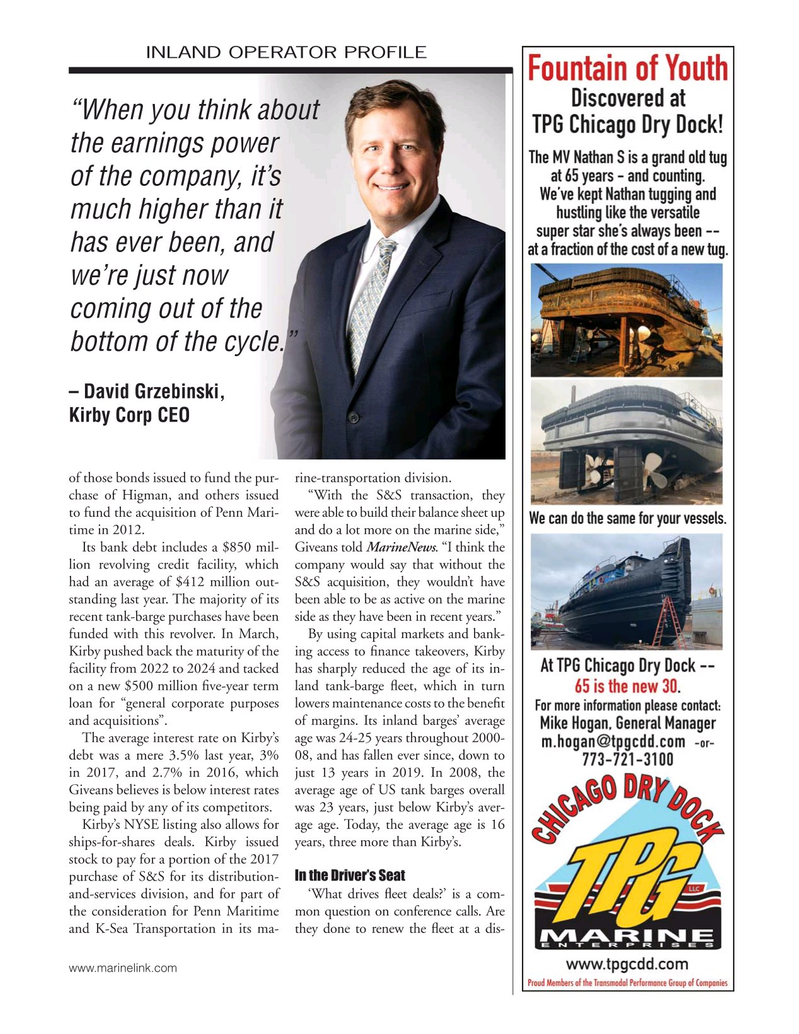 INLAND OPERATOR PROFILE “When you think about the earnings power of the company, it’s much higher than it has ever been, and we’re just now coming out of the bottom of the cycle.” – David Grzebinski,

Kirby Corp CEO of those bonds issued to fund the pur- rine-transportation division.

chase of Higman, and others issued “With the S&S transaction, they to fund the acquisition of Penn Mari- were able to build their balance sheet up time in 2012. and do a lot more on the marine side,”

Its bank debt includes a $850 mil- Giveans told MarineNews. “I think the lion revolving credit facility, which company would say that without the had an average of $412 million out- S&S acquisition, they wouldn’t have standing last year. The majority of its been able to be as active on the marine recent tank-barge purchases have been side as they have been in recent years.” funded with this revolver. In March, By using capital markets and bank-

Kirby pushed back the maturity of the ing access to ? nance takeovers, Kirby facility from 2022 to 2024 and tacked has sharply reduced the age of its in- on a new $500 million ? ve-year term land tank-barge ? eet, which in turn loan for “general corporate purposes lowers maintenance costs to the bene? t and acquisitions”. of margins. Its inland barges’ average

Giveans believes is below interest rates average age of US tank barges overall being paid by any of its competitors. was 23 years, just below Kirby’s aver-

stock to pay for a portion of the 2017 purchase of S&S for its distribution- In the Driver’s Seat and-services division, and for part of ‘What drives ? eet deals?’ is a com- the consideration for Penn Maritime mon question on conference calls. Are and K-Sea Transportation in its ma- they done to renew the ? eet at a dis- www.marinelink.com