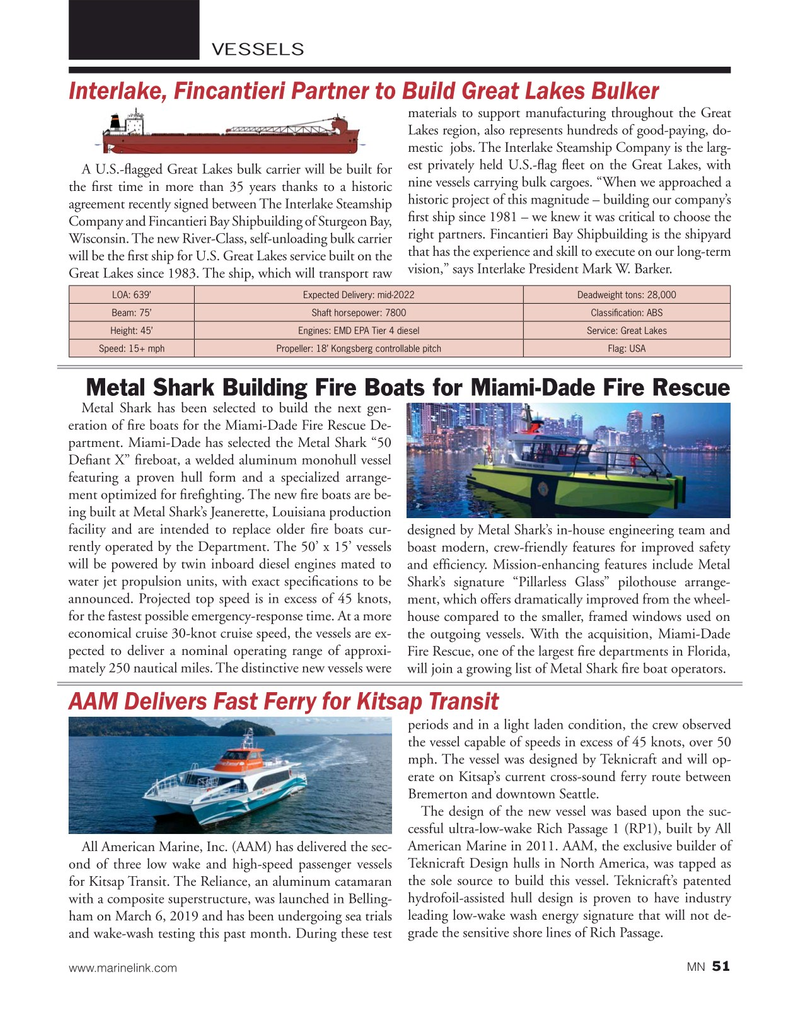 A U.S.-? agged Great Lakes bulk carrier will be built for est privately held U.S.-? ag ? eet on the Great Lakes, with the ? rst time in more than 35 years thanks to a historic nine vessels carrying bulk cargoes. “When we approached a agreement recently signed between The Interlake Steamship historic project of this magnitude – building our company’s

Company and Fincantieri Bay Shipbuilding of Sturgeon Bay, ? rst ship since 1981 – we knew it was critical to choose the

Wisconsin. The new River-Class, self-unloading bulk carrier right partners. Fincantieri Bay Shipbuilding is the shipyard will be the ? rst ship for U.S. Great Lakes service built on the that has the experience and skill to execute on our long-term

De? ant X” ? reboat, a welded aluminum monohull vessel featuring a proven hull form and a specialized arrange- ment optimized for ? re? ghting. The new ? re boats are be- ing built at Metal Shark’s Jeanerette, Louisiana production facility and are intended to replace older ? re boats cur- designed by Metal Shark’s in-house engineering team and rently operated by the Department. The 50’ x 15’ vessels boast modern, crew-friendly features for improved safety will be powered by twin inboard diesel engines mated to and ef? ciency. Mission-enhancing features include Metal water jet propulsion units, with exact speci? cations to be Shark’s signature “Pillarless Glass” pilothouse arrange- announced. Projected top speed is in excess of 45 knots, ment, which offers dramatically improved from the wheel- for the fastest possible emergency-response time. At a more house compared to the smaller, framed windows used on economical cruise 30-knot cruise speed, the vessels are ex- the outgoing vessels. With the acquisition, Miami-Dade pected to deliver a nominal operating range of approxi- Fire Rescue, one of the largest ? re departments in Florida, mately 250 nautical miles. The distinctive new vessels were will join a growing list of Metal Shark ? re boat operators.

AAM Delivers Fast Ferry for Kitsap Transit periods and in a light laden condition, the crew observed the vessel capable of speeds in excess of 45 knots, over 50 mph. The vessel was designed by Teknicraft and will op- erate on Kitsap’s current cross-sound ferry route between

The design of the new vessel was based upon the suc- cessful ultra-low-wake Rich Passage 1 (RP1), built by All

All American Marine, Inc. (AAM) has delivered the sec- American Marine in 2011. AAM, the exclusive builder of ond of three low wake and high-speed passenger vessels Teknicraft Design hulls in North America, was tapped as for Kitsap Transit. The Reliance, an aluminum catamaran the sole source to build this vessel. Teknicraft’s patented with a composite superstructure, was launched in Belling- hydrofoil-assisted hull design is proven to have industry ham on March 6, 2019 and has been undergoing sea trials leading low-wake wash energy signature that will not de- and wake-wash testing this past month. During these test grade the sensitive shore lines of Rich Passage.