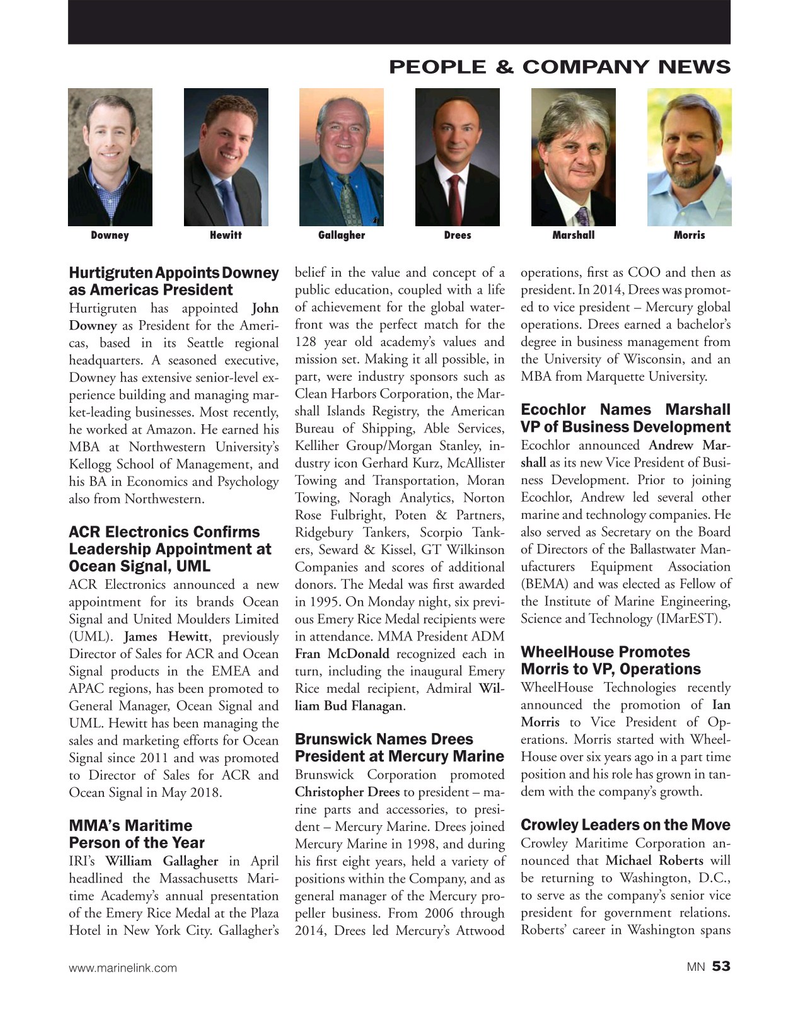 Downey HewittGallagher Drees Marshall Morris belief in the value and concept of a operations, ? rst as COO and then as

Downey as President for the Ameri- front was the perfect match for the operations. Drees earned a bachelor’s cas, based in its Seattle regional 128 year old academy’s values and degree in business management from headquarters. A seasoned executive, mission set. Making it all possible, in the University of Wisconsin, and an

VP of Business Development he worked at Amazon. He earned his Bureau of Shipping, Able Services,

Kellogg School of Management, and dustry icon Gerhard Kurz, McAllister shall as its new Vice President of Busi- his BA in Economics and Psychology Towing and Transportation, Moran ness Development. Prior to joining

Ridgebury Tankers, Scorpio Tank- also served as Secretary on the Board

ACR Electronics announced a new donors. The Medal was ? rst awarded (BEMA) and was elected as Fellow of appointment for its brands Ocean in 1995. On Monday night, six previ- the Institute of Marine Engineering,

Signal products in the EMEA and turn, including the inaugural Emery

UML. Hewitt has been managing the Morris to Vice President of Op-

Person of the Year

Mercury Marine in 1998, and during Crowley Maritime Corporation an-

IRI’s William Gallagher in April his ? rst eight years, held a variety of nounced that Michael Roberts will headlined the Massachusetts Mari- positions within the Company, and as be returning to Washington, D.C., time Academy’s annual presentation general manager of the Mercury pro- to serve as the company’s senior vice of the Emery Rice Medal at the Plaza peller business. From 2006 through president for government relations.