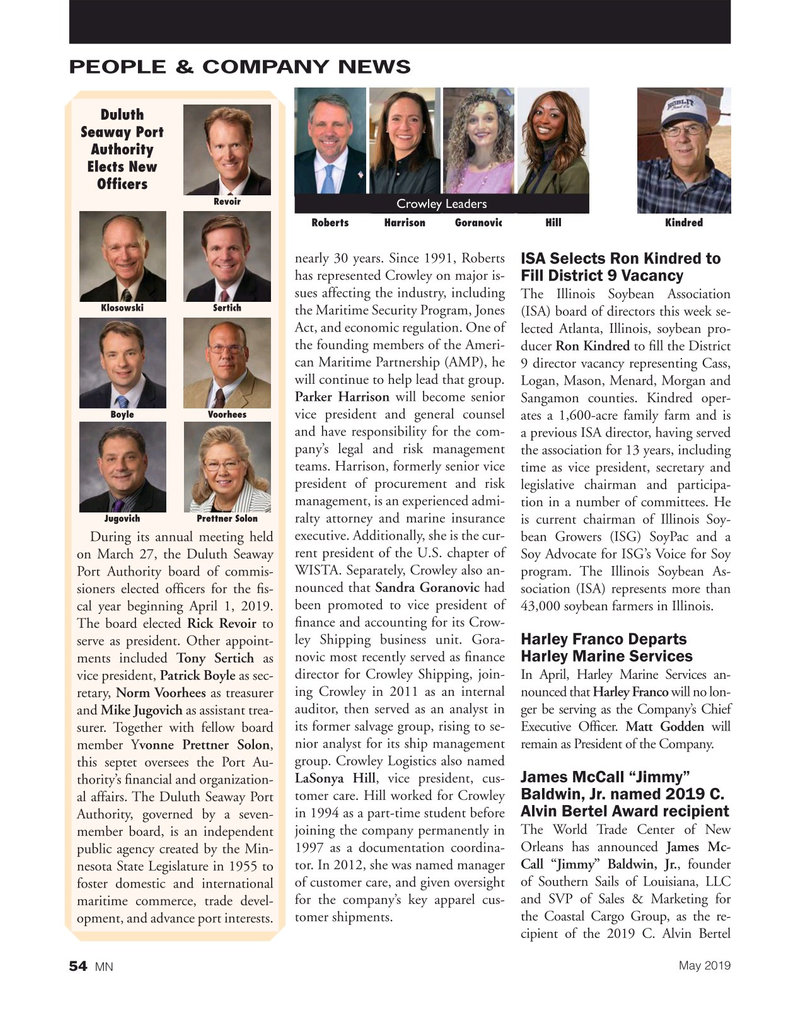 ISA Selects Ron Kindred to has represented Crowley on major is-

Act, and economic regulation. One of lected Atlanta, Illinois, soybean pro- the founding members of the Ameri- ducer Ron Kindred to ? ll the District can Maritime Partnership (AMP), he 9 director vacancy representing Cass, will continue to help lead that group. Logan, Mason, Menard, Morgan and

Boyle Voorhees vice president and general counsel ates a 1,600-acre family farm and is and have responsibility for the com- a previous ISA director, having served pany’s legal and risk management the association for 13 years, including teams. Harrison, formerly senior vice time as vice president, secretary and president of procurement and risk legislative chairman and participa- management, is an experienced admi- tion in a number of committees. He

During its annual meeting held executive. Additionally, she is the cur- bean Growers (ISG) SoyPac and a on March 27, the Duluth Seaway rent president of the U.S. chapter of Soy Advocate for ISG’s Voice for Soy

Port Authority board of commis- WISTA. Separately, Crowley also an- program. The Illinois Soybean As- sioners elected of? cers for the ? s- nounced that Sandra Goranovic had sociation (ISA) represents more than cal year beginning April 1, 2019. been promoted to vice president of 43,000 soybean farmers in Illinois.

The board elected Rick Revoir to ? nance and accounting for its Crow-

Harley Marine Services ments included Tony Sertich as novic most recently served as ? nance vice president, Patrick Boyle as sec- director for Crowley Shipping, join- In April, Harley Marine Services an- retary, Norm Voorhees as treasurer ing Crowley in 2011 as an internal nounced that Harley Franco will no lon- and Mike Jugovich as assistant trea- auditor, then served as an analyst in ger be serving as the Company’s Chief surer. Together with fellow board its former salvage group, rising to se- Executive Of? cer. Matt Godden will member Yvonne Prettner Solon, nior analyst for its ship management remain as President of the Company. this septet oversees the Port Au- group. Crowley Logistics also named

Authority, governed by a seven- in 1994 as a part-time student before joining the company permanently in The World Trade Center of New member board, is an independent 1997 as a documentation coordina- Orleans has announced James Mc- public agency created by the Min- tor. In 2012, she was named manager Call “Jimmy” Baldwin, Jr., founder nesota State Legislature in 1955 to foster domestic and international of customer care, and given oversight of Southern Sails of Louisiana, LLC for the company’s key apparel cus- and SVP of Sales & Marketing for maritime commerce, trade devel- tomer shipments. the Coastal Cargo Group, as the re- opment, and advance port interests.