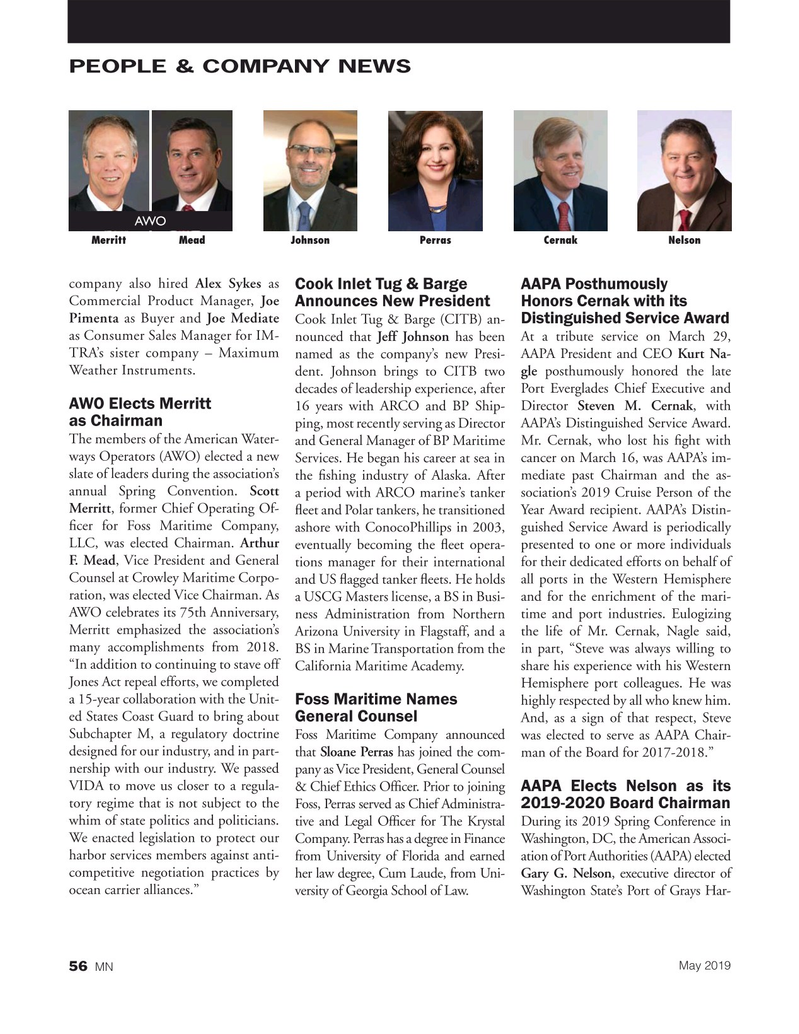 Distinguished Service Award as Consumer Sales Manager for IM- nounced that Jeff Johnson has been At a tribute service on March 29,

The members of the American Water- and General Manager of BP Maritime Mr. Cernak, who lost his ? ght with ways Operators (AWO) elected a new Services. He began his career at sea in cancer on March 16, was AAPA’s im- slate of leaders during the association’s the ? shing industry of Alaska. After mediate past Chairman and the as- annual Spring Convention. Scott a period with ARCO marine’s tanker sociation’s 2019 Cruise Person of the

LLC, was elected Chairman. Arthur eventually becoming the ? eet opera- presented to one or more individuals

F. Mead, Vice President and General tions manager for their international for their dedicated efforts on behalf of

Counsel at Crowley Maritime Corpo- and US ? agged tanker ? eets. He holds all ports in the Western Hemisphere ration, was elected Vice Chairman. As a USCG Masters license, a BS in Busi- and for the enrichment of the mari-

Merritt emphasized the association’s Arizona University in Flagstaff, and a the life of Mr. Cernak, Nagle said, many accomplishments from 2018. BS in Marine Transportation from the in part, “Steve was always willing to “In addition to continuing to stave off California Maritime Academy. share his experience with his Western

Jones Act repeal efforts, we completed Hemisphere port colleagues. He was a 15-year collaboration with the Unit- highly respected by all who knew him.

Foss Maritime Names ed States Coast Guard to bring about And, as a sign of that respect, Steve

Subchapter M, a regulatory doctrine Foss Maritime Company announced was elected to serve as AAPA Chair- designed for our industry, and in part- that Sloane Perras has joined the com- man of the Board for 2017-2018.” nership with our industry. We passed pany as Vice President, General Counsel

VIDA to move us closer to a regula- & Chief Ethics Of? cer. Prior to joining

AAPA Elects Nelson as its tory regime that is not subject to the Foss, Perras served as Chief Administra- 2019-2020 Board Chairman whim of state politics and politicians. tive and Legal Of? cer for The Krystal During its 2019 Spring Conference in