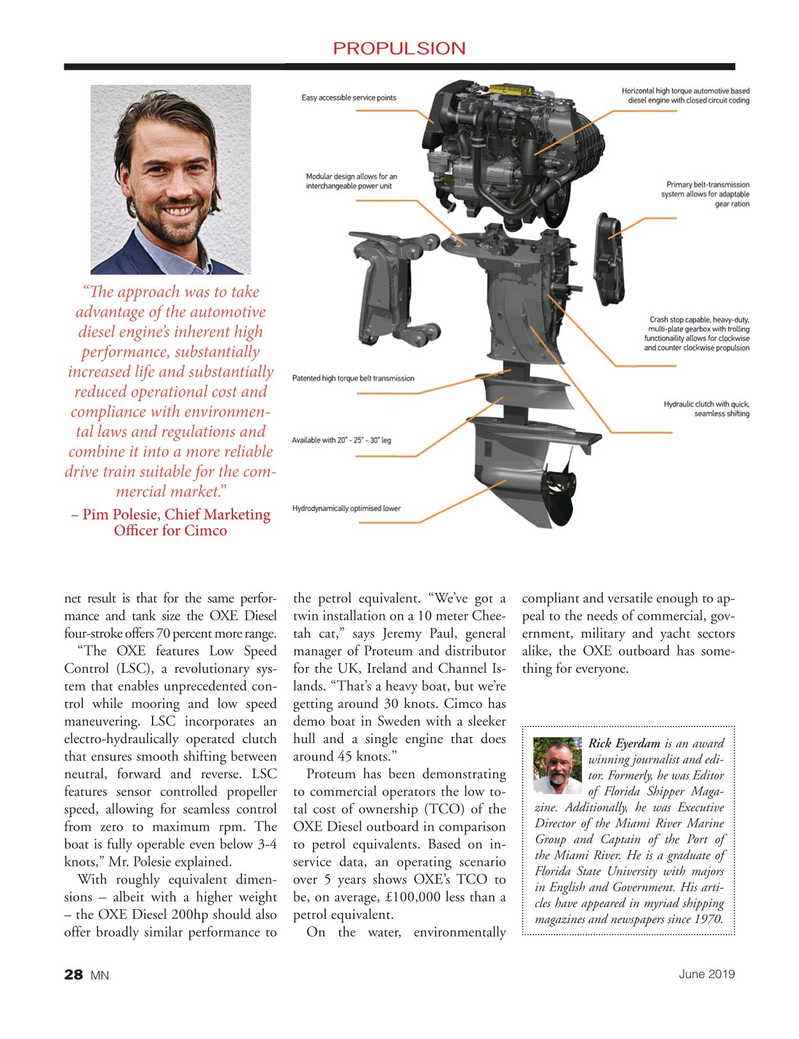 Of cer for Cimco net result is that for the same perfor- the petrol equivalent. “We’ve got a compliant and versatile enough to ap- mance and tank size the OXE Diesel twin installation on a 10 meter Chee- peal to the needs of commercial, gov- four-stroke offers 70 percent more range. tah cat,” says Jeremy Paul, general ernment, military and yacht sectors “The OXE features Low Speed manager of Proteum and distributor alike, the OXE outboard has some-

Control (LSC), a revolutionary sys- for the UK, Ireland and Channel Is- thing for everyone.

tem that enables unprecedented con- lands. “That’s a heavy boat, but we’re trol while mooring and low speed getting around 30 knots. Cimco has maneuvering. LSC incorporates an demo boat in Sweden with a sleeker electro-hydraulically operated clutch hull and a single engine that does

Rick Eyerdam is an award that ensures smooth shifting between around 45 knots.” winning journalist and edi- neutral, forward and reverse. LSC Proteum has been demonstrating tor. Formerly, he was Editor of Florida Shipper Maga- features sensor controlled propeller to commercial operators the low to- zine. Additionally, he was Executive speed, allowing for seamless control tal cost of ownership (TCO) of the

Director of the Miami River Marine from zero to maximum rpm. The OXE Diesel outboard in comparison

Group and Captain of the Port of boat is fully operable even below 3-4 to petrol equivalents. Based on in- the Miami River. He is a graduate of knots,” Mr. Polesie explained. service data, an operating scenario

With roughly equivalent dimen- over 5 years shows OXE’s TCO to in English and Government. His arti- sions – albeit with a higher weight be, on average, £100,000 less than a cles have appeared in myriad shipping – the OXE Diesel 200hp should also petrol equivalent.

magazines and newspapers since 1970.

offer broadly similar performance to On the water, environmentally