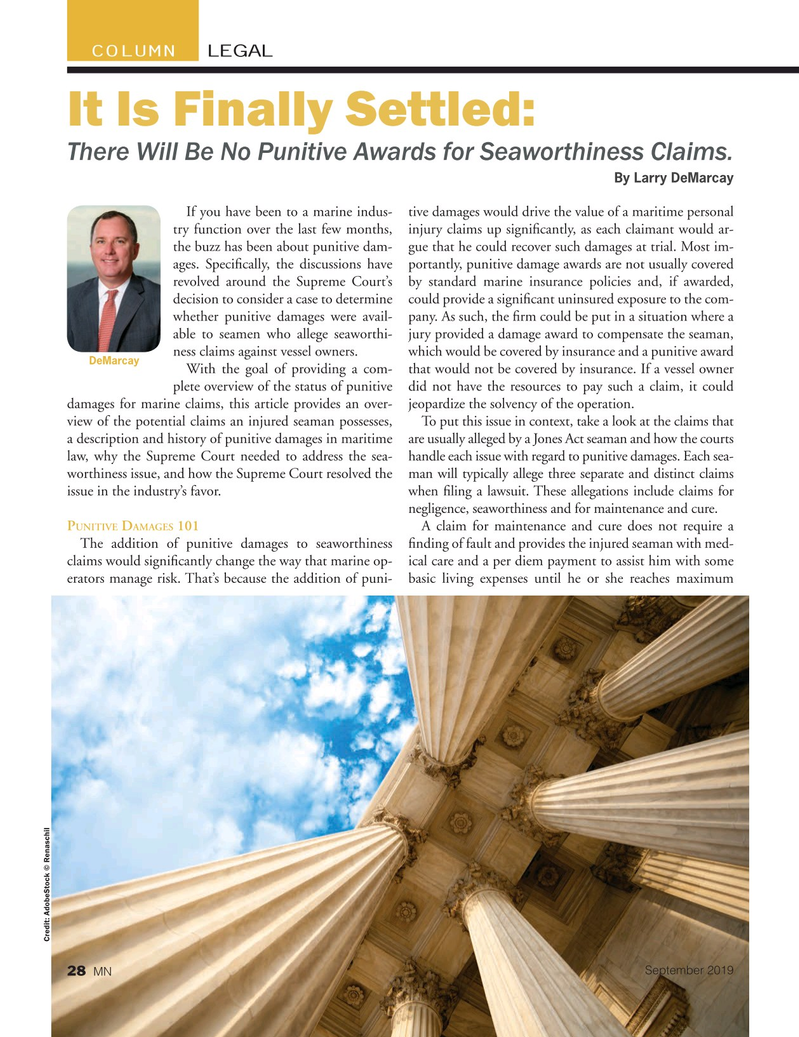 It Is Finally Settled:

There Will Be No Punitive Awards for Seaworthiness Claims.

If you have been to a marine indus- tive damages would drive the value of a maritime personal try function over the last few months, injury claims up signi? cantly, as each claimant would ar- the buzz has been about punitive dam- gue that he could recover such damages at trial. Most im- ages. Speci? cally, the discussions have portantly, punitive damage awards are not usually covered revolved around the Supreme Court’s by standard marine insurance policies and, if awarded, decision to consider a case to determine could provide a signi? cant uninsured exposure to the com- whether punitive damages were avail- pany. As such, the ? rm could be put in a situation where a able to seamen who allege seaworthi- jury provided a damage award to compensate the seaman, ness claims against vessel owners. which would be covered by insurance and a punitive award

With the goal of providing a com- that would not be covered by insurance. If a vessel owner plete overview of the status of punitive did not have the resources to pay such a claim, it could damages for marine claims, this article provides an over- jeopardize the solvency of the operation. view of the potential claims an injured seaman possesses, To put this issue in context, take a look at the claims that a description and history of punitive damages in maritime are usually alleged by a Jones Act seaman and how the courts law, why the Supreme Court needed to address the sea- handle each issue with regard to punitive damages. Each sea- worthiness issue, and how the Supreme Court resolved the man will typically allege three separate and distinct claims issue in the industry’s favor. when ? ling a lawsuit. These allegations include claims for negligence, seaworthiness and for maintenance and cure.

The addition of punitive damages to seaworthiness ? nding of fault and provides the injured seaman with med- claims would signi? cantly change the way that marine op- ical care and a per diem payment to assist him with some erators manage risk. That’s because the addition of puni- basic living expenses until he or she reaches maximum