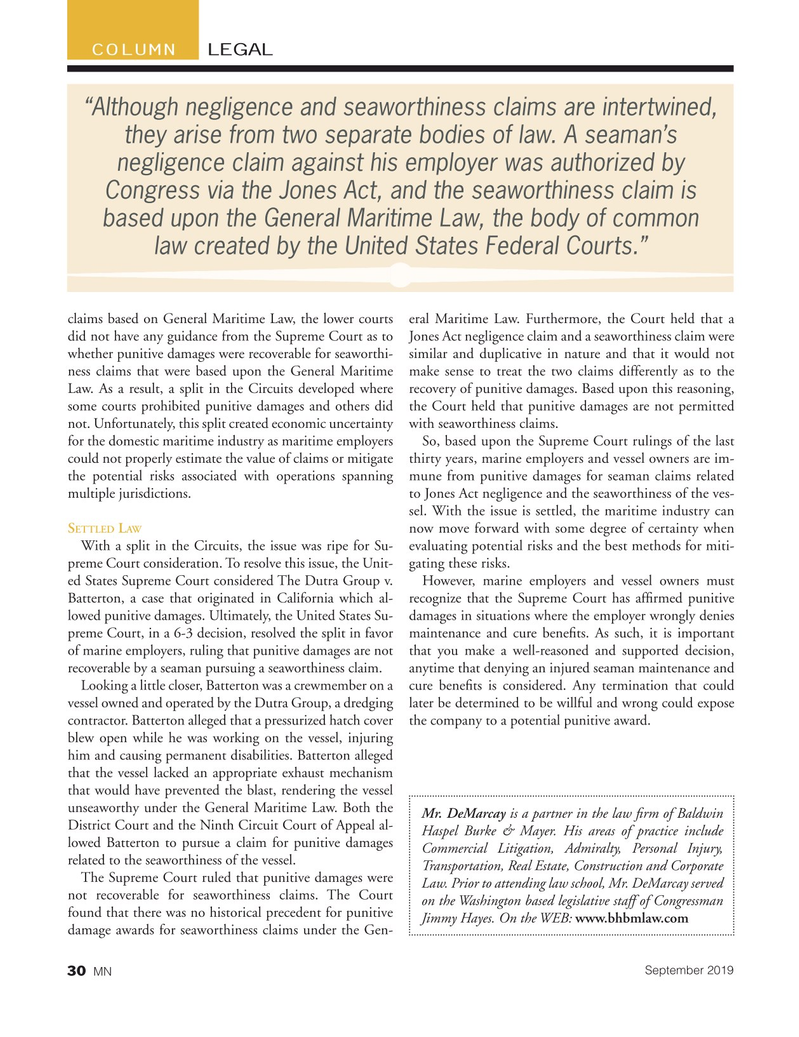 COLUMN LEGAL “Although negligence and seaworthiness claims are intertwined, they arise from two separate bodies of law. A seaman’s negligence claim against his employer was authorized by

Law. As a result, a split in the Circuits developed where recovery of punitive damages. Based upon this reasoning, some courts prohibited punitive damages and others did the Court held that punitive damages are not permitted not. Unfortunately, this split created economic uncertainty with seaworthiness claims.

for the domestic maritime industry as maritime employers So, based upon the Supreme Court rulings of the last could not properly estimate the value of claims or mitigate thirty years, marine employers and vessel owners are im- the potential risks associated with operations spanning mune from punitive damages for seaman claims related multiple jurisdictions. to Jones Act negligence and the seaworthiness of the ves- sel. With the issue is settled, the maritime industry can

S L now move forward with some degree of certainty when

With a split in the Circuits, the issue was ripe for Su- evaluating potential risks and the best methods for miti- preme Court consideration. To resolve this issue, the Unit- gating these risks.

Batterton, a case that originated in California which al- recognize that the Supreme Court has af? rmed punitive lowed punitive damages. Ultimately, the United States Su- damages in situations where the employer wrongly denies preme Court, in a 6-3 decision, resolved the split in favor maintenance and cure bene? ts. As such, it is important of marine employers, ruling that punitive damages are not that you make a well-reasoned and supported decision, recoverable by a seaman pursuing a seaworthiness claim. anytime that denying an injured seaman maintenance and

Looking a little closer, Batterton was a crewmember on a cure bene? ts is considered. Any termination that could vessel owned and operated by the Dutra Group, a dredging later be determined to be willful and wrong could expose contractor. Batterton alleged that a pressurized hatch cover the company to a potential punitive award. blew open while he was working on the vessel, injuring him and causing permanent disabilities. Batterton alleged that the vessel lacked an appropriate exhaust mechanism that would have prevented the blast, rendering the vessel unseaworthy under the General Maritime Law. Both the

Mr. DeMarcay is a partner in the law ? rm of Baldwin

District Court and the Ninth Circuit Court of Appeal al-

Haspel Burke & Mayer. His areas of practice include lowed Batterton to pursue a claim for punitive damages

Commercial Litigation, Admiralty, Personal Injury, related to the seaworthiness of the vessel.

The Supreme Court ruled that punitive damages were

Law. Prior to attending law school, Mr. DeMarcay served not recoverable for seaworthiness claims. The Court on the Washington based legislative staff of Congressman found that there was no historical precedent for punitive

Jimmy Hayes. On the WEB: www.bhbmlaw.com damage awards for seaworthiness claims under the Gen-