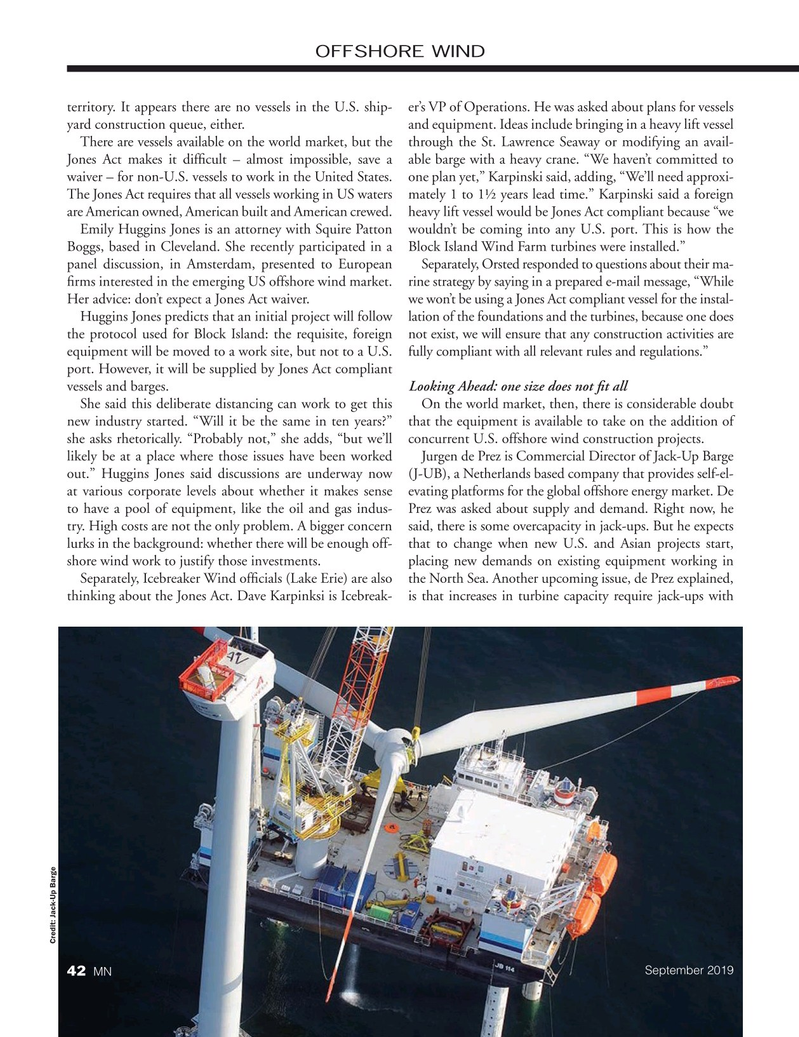 OFFSHORE WIND territory. It appears there are no vessels in the U.S. ship- er’s VP of Operations. He was asked about plans for vessels yard construction queue, either. and equipment. Ideas include bringing in a heavy lift vessel

There are vessels available on the world market, but the through the St. Lawrence Seaway or modifying an avail-

Jones Act makes it dif? cult – almost impossible, save a able barge with a heavy crane. “We haven’t committed to waiver – for non-U.S. vessels to work in the United States. one plan yet,” Karpinski said, adding, “We’ll need approxi-

The Jones Act requires that all vessels working in US waters mately 1 to 1½ years lead time.” Karpinski said a foreign are American owned, American built and American crewed. heavy lift vessel would be Jones Act compliant because “we

Emily Huggins Jones is an attorney with Squire Patton wouldn’t be coming into any U.S. port. This is how the

Boggs, based in Cleveland. She recently participated in a Block Island Wind Farm turbines were installed.” panel discussion, in Amsterdam, presented to European Separately, Orsted responded to questions about their ma- ? rms interested in the emerging US offshore wind market. rine strategy by saying in a prepared e-mail message, “While

Her advice: don’t expect a Jones Act waiver. we won’t be using a Jones Act compliant vessel for the instal-

Huggins Jones predicts that an initial project will follow lation of the foundations and the turbines, because one does the protocol used for Block Island: the requisite, foreign not exist, we will ensure that any construction activities are equipment will be moved to a work site, but not to a U.S. fully compliant with all relevant rules and regulations.” port. However, it will be supplied by Jones Act compliant vessels and barges. Looking Ahead: one size does not ? t all

She said this deliberate distancing can work to get this On the world market, then, there is considerable doubt new industry started. “Will it be the same in ten years?” that the equipment is available to take on the addition of she asks rhetorically. “Probably not,” she adds, “but we’ll concurrent U.S. offshore wind construction projects.

likely be at a place where those issues have been worked Jurgen de Prez is Commercial Director of Jack-Up Barge out.” Huggins Jones said discussions are underway now (J-UB), a Netherlands based company that provides self-el- at various corporate levels about whether it makes sense evating platforms for the global offshore energy market. De to have a pool of equipment, like the oil and gas indus- Prez was asked about supply and demand. Right now, he try. High costs are not the only problem. A bigger concern said, there is some overcapacity in jack-ups. But he expects lurks in the background: whether there will be enough off- that to change when new U.S. and Asian projects start, shore wind work to justify those investments. placing new demands on existing equipment working in

Separately, Icebreaker Wind of? cials (Lake Erie) are also the North Sea. Another upcoming issue, de Prez explained, thinking about the Jones Act. Dave Karpinksi is Icebreak- is that increases in turbine capacity require jack-ups with