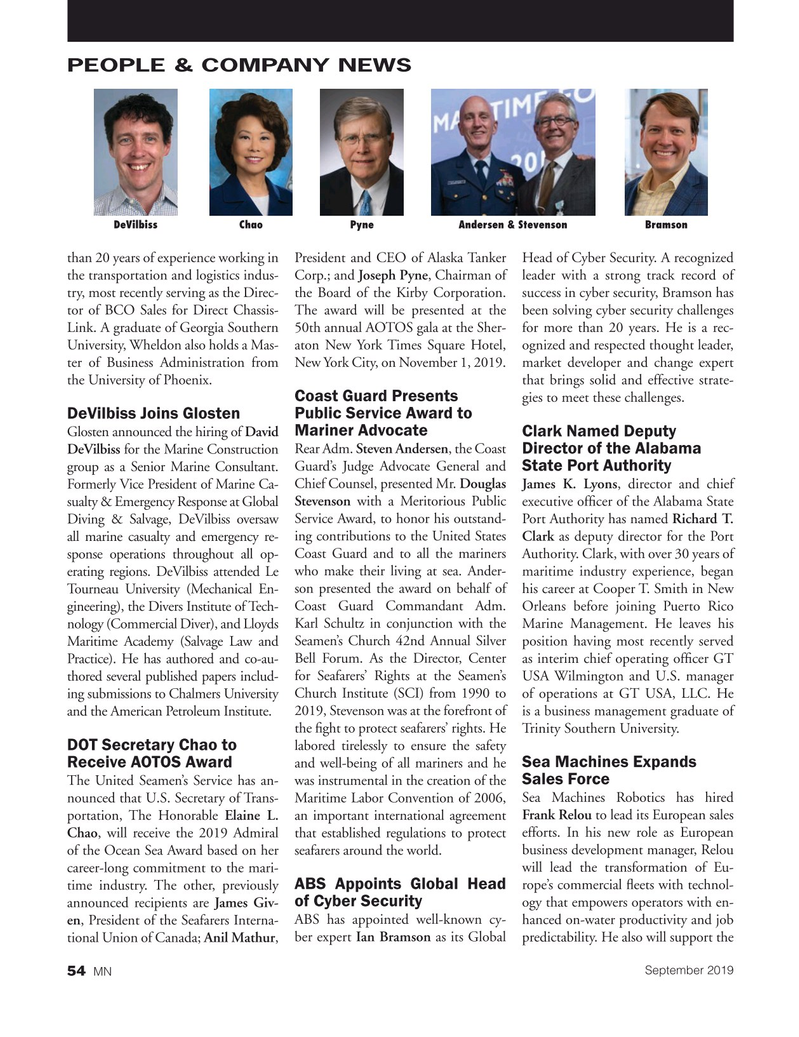 DeVilbiss Chao Pyne Andersen & Stevenson Bramson than 20 years of experience working in President and CEO of Alaska Tanker Head of Cyber Security. A recognized the transportation and logistics indus- Corp.; and Joseph Pyne, Chairman of leader with a strong track record of try, most recently serving as the Direc- the Board of the Kirby Corporation. success in cyber security, Bramson has tor of BCO Sales for Direct Chassis- The award will be presented at the been solving cyber security challenges

Link. A graduate of Georgia Southern 50th annual AOTOS gala at the Sher- for more than 20 years. He is a rec-

Glosten announced the hiring of David

Director of the Alabama

Diving & Salvage, DeVilbiss oversaw Service Award, to honor his outstand- Port Authority has named Richard T. all marine casualty and emergency re- ing contributions to the United States Clark as deputy director for the Port sponse operations throughout all op- Coast Guard and to all the mariners Authority. Clark, with over 30 years of erating regions. DeVilbiss attended Le who make their living at sea. Ander- maritime industry experience, began

Tourneau University (Mechanical En- son presented the award on behalf of his career at Cooper T. Smith in New gineering), the Divers Institute of Tech- Coast Guard Commandant Adm. Orleans before joining Puerto Rico nology (Commercial Diver), and Lloyds Karl Schultz in conjunction with the Marine Management. He leaves his

Practice). He has authored and co-au- Bell Forum. As the Director, Center as interim chief operating of? cer GT thored several published papers includ- for Seafarers’ Rights at the Seamen’s USA Wilmington and U.S. manager ing submissions to Chalmers University Church Institute (SCI) from 1990 to of operations at GT USA, LLC. He and the American Petroleum Institute. 2019, Stevenson was at the forefront of is a business management graduate of the ? ght to protect seafarers’ rights. He Trinity Southern University. labored tirelessly to ensure the safety

The United Seamen’s Service has an- was instrumental in the creation of the nounced that U.S. Secretary of Trans- Maritime Labor Convention of 2006, Sea Machines Robotics has hired portation, The Honorable Elaine L. an important international agreement Frank Relou to lead its European sales

Chao, will receive the 2019 Admiral that established regulations to protect efforts. In his new role as European of the Ocean Sea Award based on her seafarers around the world. business development manager, Relou career-long commitment to the mari- will lead the transformation of Eu-