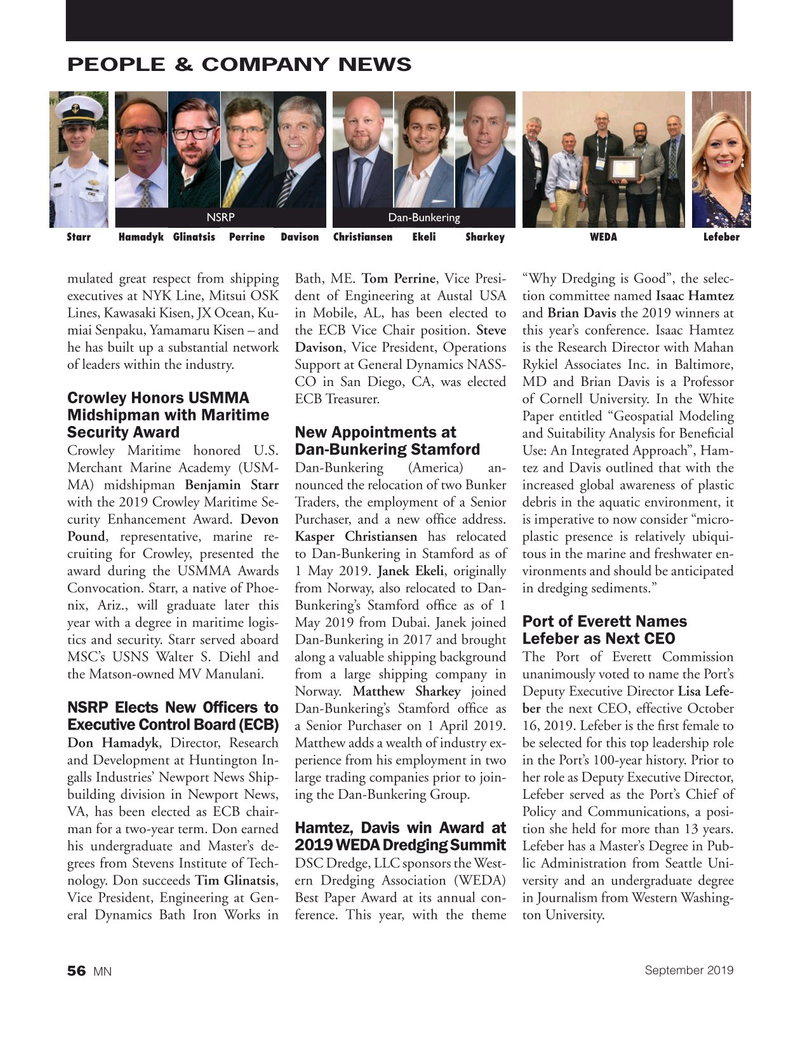 Lines, Kawasaki Kisen, JX Ocean, Ku- in Mobile, AL, has been elected to and Brian Davis the 2019 winners at miai Senpaku, Yamamaru Kisen – and the ECB Vice Chair position. Steve this year’s conference. Isaac Hamtez he has built up a substantial network Davison, Vice President, Operations is the Research Director with Mahan of leaders within the industry. Support at General Dynamics NASS- Rykiel Associates Inc. in Baltimore,

CO in San Diego, CA, was elected MD and Brian Davis is a Professor

ECB Treasurer. of Cornell University. In the White

MA) midshipman Benjamin Starr nounced the relocation of two Bunker increased global awareness of plastic with the 2019 Crowley Maritime Se- Traders, the employment of a Senior debris in the aquatic environment, it curity Enhancement Award. Devon Purchaser, and a new of? ce address. is imperative to now consider “micro-

Pound, representative, marine re- Kasper Christiansen has relocated plastic presence is relatively ubiqui- cruiting for Crowley, presented the to Dan-Bunkering in Stamford as of tous in the marine and freshwater en- award during the USMMA Awards 1 May 2019. Janek Ekeli, originally vironments and should be anticipated

Convocation. Starr, a native of Phoe- from Norway, also relocated to Dan- in dredging sediments.” nix, Ariz., will graduate later this Bunkering’s Stamford of? ce as of 1

Port of Everett Names year with a degree in maritime logis- May 2019 from Dubai. Janek joined

Lefeber as Next CEO tics and security. Starr served aboard Dan-Bunkering in 2017 and brought

MSC’s USNS Walter S. Diehl and along a valuable shipping background The Port of Everett Commission the Matson-owned MV Manulani. from a large shipping company in unanimously voted to name the Port’s

NSRP Elects New Of? cers to

Dan-Bunkering’s Stamford of? ce as ber the next CEO, effective October

Don Hamadyk, Director, Research Matthew adds a wealth of industry ex- be selected for this top leadership role and Development at Huntington In- perience from his employment in two in the Port’s 100-year history. Prior to galls Industries’ Newport News Ship- large trading companies prior to join- her role as Deputy Executive Director, building division in Newport News, ing the Dan-Bunkering Group. Lefeber served as the Port’s Chief of

VA, has been elected as ECB chair- Policy and Communications, a posi-