Vessel Inspections: It's All About Safety

With the announcements that New York Waterway, a ferry operator running 32 boats around New York and New Jersey waters, had been largely shut down by the U.S. Coast Guard just prior to Thanksgiving, 2019, the reactions ranged from surprise to outright shock. There was also a great deal of grumbling, as commuters, the major customer group, endured delays on New York Waterway’s extensive network across the Hudson River, bringing New Jersey commuters into New York’s business districts.

By mid-December, most of the vessels have returned to service (only five remained out of service as of this writing). But, the Captain of the Port, Capt. Jason Tama, in a statement, noted, “In order to ensure continued compliance with safety standards, the Coast Guard will be indefinitely increasing inspections across the entire New York Waterway fleet...We will continue to work with New York Waterway to ensure sustained compliance with Coast Guard safety requirements. As part of this effort, we will be increasing both scheduled and unannounced inspections of their fleet moving forward.”

“Proactive enforcement”, a term borrowed from the worlds of police and keeping situations under control, can certainly be applied here. Indeed, the phrase found its way into remarks delivered by Tom Allegretti, the outgoing President and Chief Executive Officer of the American Waterway Operators (AWO), a trade association for the workboat and towing and barging sector.

Allegretti’s remarks came in a speech at a late-September 2019 conference on Subchapter M, which provides a framework for safety management of towing vessels (rather than ferries). By all accounts, Subchapter M, which came into effect nearly two years ago, is still a work in progress – or “an unfinished journey” in Allegretti’s words – and is being fine-tuned.

Under Subchapter M (found within 46 CFR), previously uninspected towing vessels are now subject to rigorous vessel inspections, whether by the Coast Guard or through third-party organizations (TPO, an integral part of the process). These TPOs include American Bureau of Shipping (ABS), which covers inland waterways and coastal ports, but also smaller outfits working regionally. When it comes to towing vessels, information about detentions is closely guarded, in contrast to the high-profile New York Waterway episode. 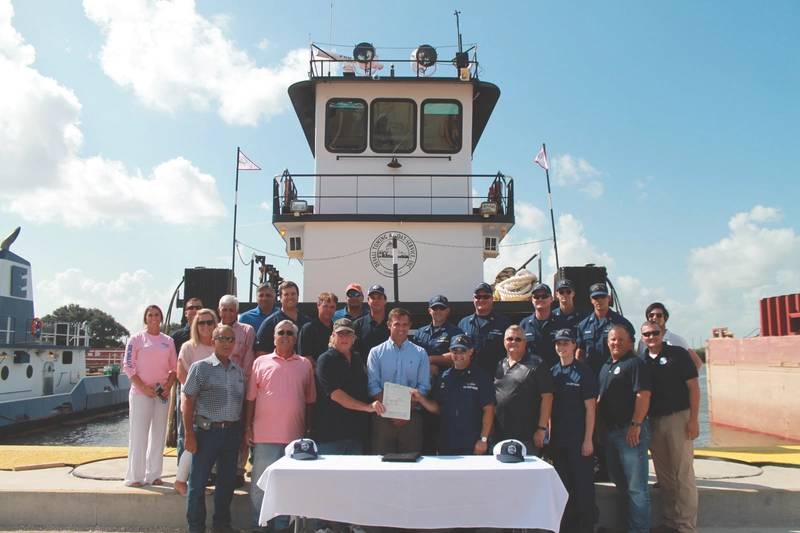 Passenger vessels are subject to more stringent standards than towing vessels. An ex-surveyor who is now with a TPO, Steve Lindholm, Consulting Engineer/ Naval Architect at EDT Forensic Engineering & Consulting, explained, “Many of the inspection requirements of Subchapter M were modeled on the inspection requirements for cargo vessels – in so much as a towing vessel is not intended to carry passengers. Passenger vessel regulations – and the subsequent inspections – are a super-set of cargo vessel inspections, adding requirements to address the fire protection, alerting and orderly evacuation of the high-value cargo of human life.” He said, “Subchapter M was modeled on elements taken from Subchapter I, the Responsible Carrier Program of the AWO, and the International Safe Management (ISM) Code from the International Maritime Organization (IMO).”

Nonetheless, there are some similarities in the regulatory frameworks for passenger vessels, such as those of New York Waterway, and the towboats subject to Subchapter M. Several years out, the same framework will apply across the board. Commander Jake Hobson, Chief of the Inspections Division at USCG Sector New York, told Marine News, “The inspection regime for Sub M (tow vessels) and other vessels including ferries will be the same after the four-year implementation of the Sub M program…So, in action once the four-year phase in is complete, the vessels will then be all inspected and will be in the same inspection regime (annual, five-year Certificates of Inspection (COI) and required dry-dock inspection regime).”

At the same conference where Allegretti spoke, a U.S. Coast Guard (USCG) presentation provided insights into deficiencies noted, and actual detentions, regarding inland towing vessels (ITV), detailing incidents reported during July through September, 2019. The presentation noted that 655 total deficiencies were issued to ITVs during the three-month period, with the main categories being issues related to “main propulsion engine” (65 instances), propulsion and other machinery (35 instances) and structural conditions (33 instances). Farther down the list were firefighting equipment and appliances (18 deficiencies), other fire safety (also 18) and lifejacket issues (18).

Lindholm, based on the West Coast, had stressed that all his TPO work is confidential, but he did relay one rumor to Marine News, “The TPOs have heard of USCG enforcement of Subchapter M on at least one operator after a casualty who was subjected to a fleet-wide inspection of their towing vessels for Subchapter M compliance.”

The USCG conference speech also detailed nine actual ITV detentions, all in the USCG District 8 (covering the inland river system and Gulf Intracoastal Waterway), during the three-month period. These included a response to a fatal man overboard event, several instances of oil leaks and oily bilges, as well as issues with fire extinguishers and firefighting equipment. In several of the cases, COIs were issued after boat operators corrected deficiencies flagged by the inspectors. 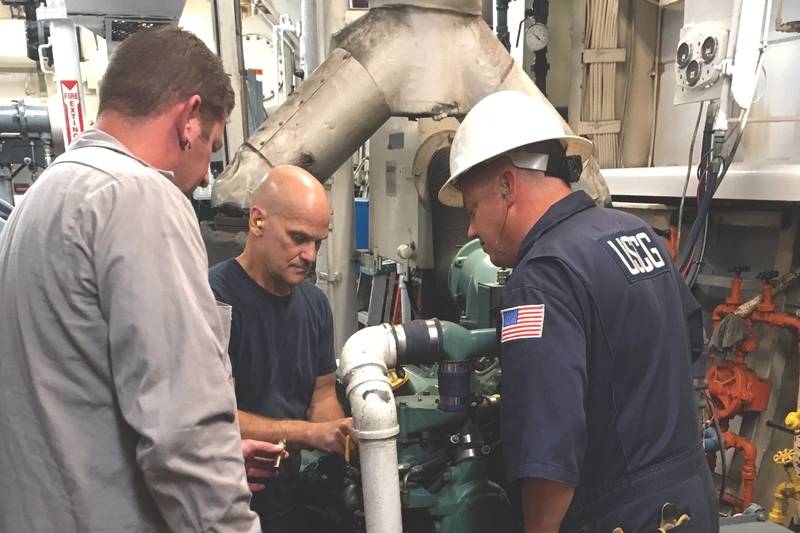 Though arrangement between the USCG and the outside inspectors are still being worked out, the TPOs are playing an important role; the nine detentions detailed above were ordered by both USCG and third-party inspectors. Lindholm pointed out, “If a vessel is inspected by the USCG and the operator does not have a Towing Safety Management System with a TPO, then the USCG may, depending on the severity of the infractions, expand their inspections to other vessels in the operator’s fleet.” The challenge, for both, is making a determination as to whether the deficiency is a “one off” (likely specific to the vessel and its crew), or whether it’s systemic, pointing to a failure in company management.

As Subchapter M moves toward the midpoint of its four-year break-in period, some modification is expected. Cdr. Hobson, in New York, noted that mid-course corrections may be expected, telling Marine News, the Coast Guard has been in regular talks with industry, and at headquarters levels with TPOs on course corrections. There are a few items that have been the result of much research and discussion and are being ‘fine-tuned’. Some of these items remain to be worked through completely and consist of:

Lindholm, from EDT Forensic Engineering, provided an example where a strict reading of the rules is being sensibly adapted to towing industry practices. He told Marine News, “One point of discussion between the TPOs and the USCG has been over the carriage of ‘ballast’ water in voids to adjust the trim of the towing vessel. In some operational scenarios, increasing the draft aft and/or forward assists in decreasing ‘air draft’ under bridges and provides better efficiency to the propellers.” Yet operational considerations for inland towing do not comport with a precise reading of the rules. Lindholm explained further, “By definition, a ‘void’ space is a space which is not used for the carriage of fuel, lubricants, water, or equipment. It is ‘void’ of all means to transfer liquids. So, if water, fuel, or oil is found in these compartments, the conclusion could be that this liquid is from either an adjacent tank or from outside – either would warrant an inspection to determine the source and a potential limitation of movement, up to detention to port.” He pointed out, “TPOs are working with the USCG on a reasonable interpretation of ‘watertight integrity’ to ensure that operators who routinely use void spaces as temporary ballast tanks are not penalized for an industry practice which actually promotes safe operation of towing vessels.” 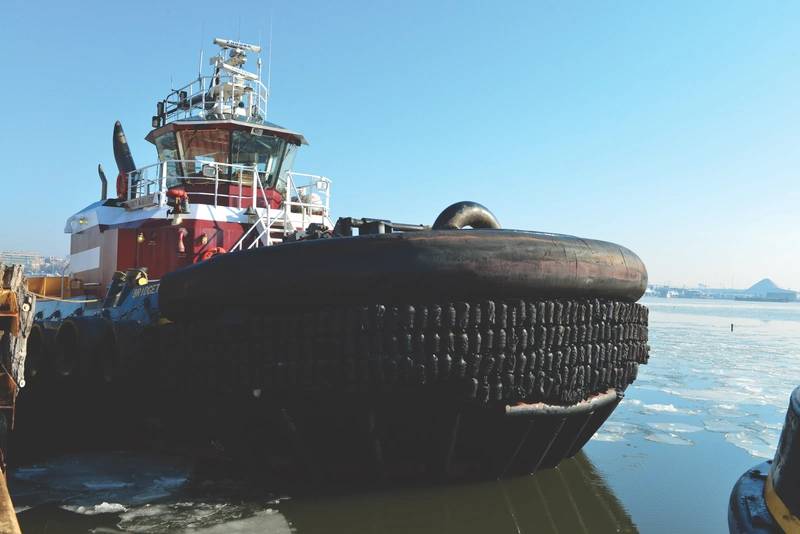 Whether the discussion turns to passengers, or to crew and cargo, safety is a paramount consideration for the USCG. Cdr. Hobson in New York told Marine News: “One thing you may hear of from industry as ‘enforcement’ or noncompliance is following a marine casualty. While we do not see this as enforcement, there have been cases that would result in a vessel being removed from service following a reportable marine casualty or other failure of the vessel that would present a potential hazard to the port or the crew. In these cases, we have intervened as we would in any other case (with any other vessel type) to ensure safe operation of the vessel for the crew and the port.”

In this context, the New York Waterway episode, and the 655 towing vessel deficiencies noted earlier (and the nine actual detentions) can be seen as a very small price to pay for safety. The USCG is working with industry in a proactive way.

Cdr. Hobson said, “As for enforcement, Coast Guard Headquarters has prioritized outreach and discussion vs. an enforcement policy at this time. While this may change with new policy in the near future, here at Sector New York we have had several meetings with industry and other specific forums to reach out to the towing industry in an effort to encourage [Subchapter M] application submittals. The first year went fairly well, however we have noted a slowdown in the second year across the industry of vessel applications submitted to the Coast Guard, at least here in N.Y.”

As the Subchapter M process enters its third year, the towing industry and regulators alike are benefitting from a “learning curve”, which includes a familiarity with paperwork and inspection procedures. As routines become systematized, egregious deficiencies (of the type that would require a detention) will stand out, enabling quicker and effective regulation. Cdr. Hobson stressed, “We are always willing to work with industry; safety is paramount.” 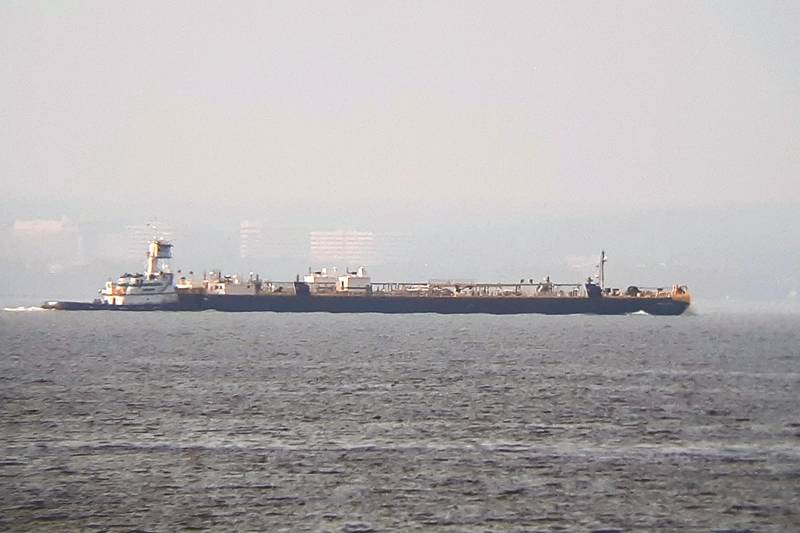 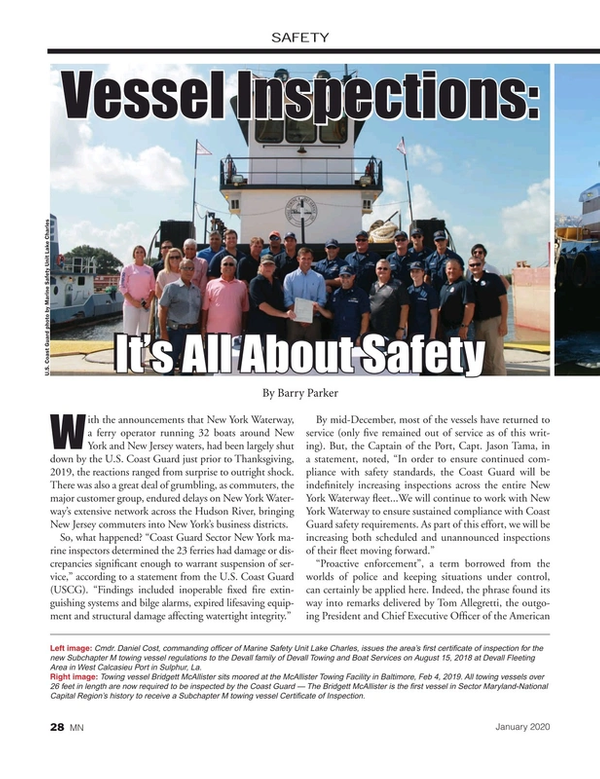 Read Vessel Inspections: It's All About Safety in Pdf, Flash or Html5 edition of January 2020 Marine News

Other stories from January 2020 issue