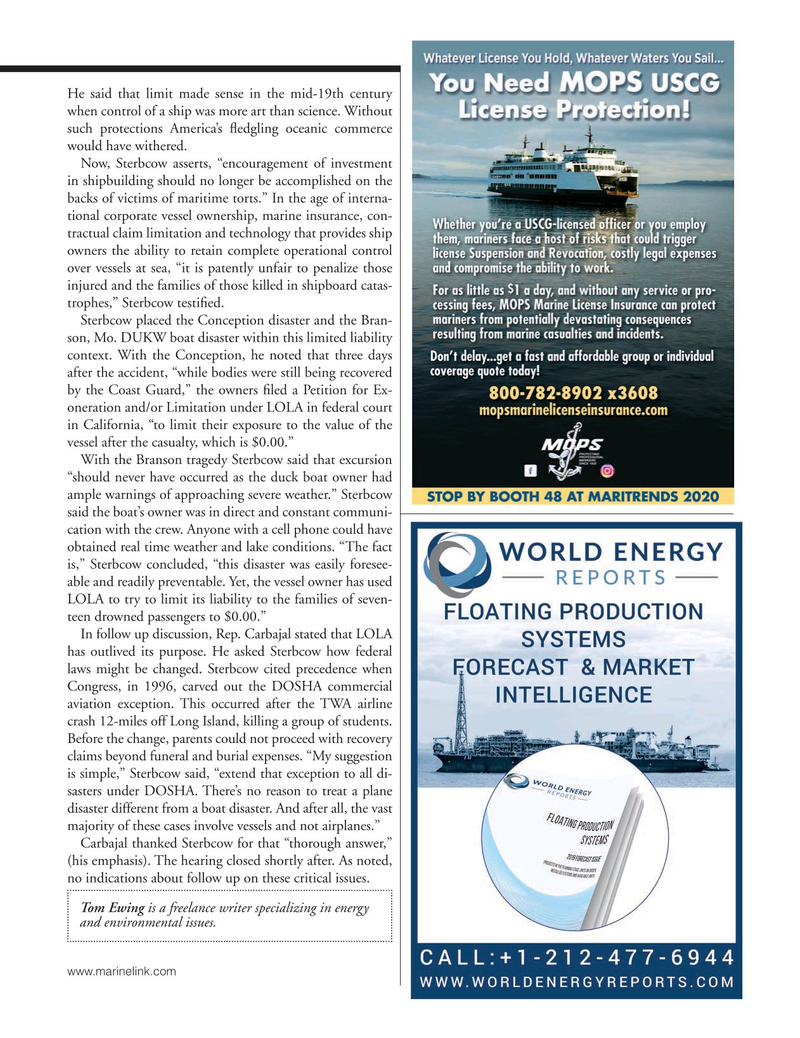 He said that limit made sense in the mid-19th century when control of a ship was more art than science. Without such protections America’s ? edgling oceanic commerce would have withered.

Now, Sterbcow asserts, “encouragement of investment in shipbuilding should no longer be accomplished on the backs of victims of maritime torts.” In the age of interna- tional corporate vessel ownership, marine insurance, con- tractual claim limitation and technology that provides ship owners the ability to retain complete operational control over vessels at sea, “it is patently unfair to penalize those injured and the families of those killed in shipboard catas- trophes,” Sterbcow testi? ed.

Sterbcow placed the Conception disaster and the Bran- son, Mo. DUKW boat disaster within this limited liability context. With the Conception, he noted that three days after the accident, “while bodies were still being recovered by the Coast Guard,” the owners ? led a Petition for Ex- oneration and/or Limitation under LOLA in federal court in California, “to limit their exposure to the value of the vessel after the casualty, which is $0.00.”

With the Branson tragedy Sterbcow said that excursion “should never have occurred as the duck boat owner had ample warnings of approaching severe weather.” Sterbcow said the boat’s owner was in direct and constant communi- cation with the crew. Anyone with a cell phone could have obtained real time weather and lake conditions. “The fact is,” Sterbcow concluded, “this disaster was easily foresee- able and readily preventable. Yet, the vessel owner has used

LOLA to try to limit its liability to the families of seven- teen drowned passengers to $0.00.”

In follow up discussion, Rep. Carbajal stated that LOLA has outlived its purpose. He asked Sterbcow how federal laws might be changed. Sterbcow cited precedence when

Congress, in 1996, carved out the DOSHA commercial aviation exception. This occurred after the TWA airline crash 12-miles off Long Island, killing a group of students.

Before the change, parents could not proceed with recovery claims beyond funeral and burial expenses. “My suggestion is simple,” Sterbcow said, “extend that exception to all di- sasters under DOSHA. There’s no reason to treat a plane disaster different from a boat disaster. And after all, the vast majority of these cases involve vessels and not airplanes.”

Carbajal thanked Sterbcow for that “thorough answer,” (his emphasis). The hearing closed shortly after. As noted, no indications about follow up on these critical issues.

Tom Ewing is a freelance writer specializing in energy and environmental issues.