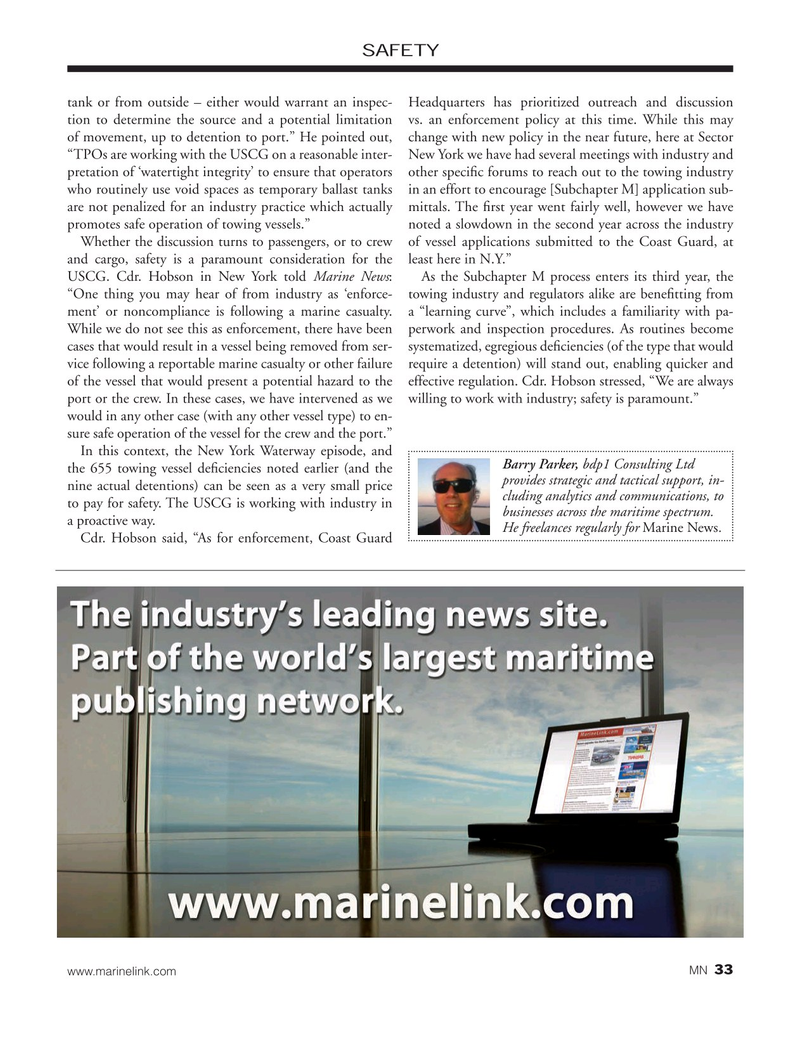 SAFETY tank or from outside – either would warrant an inspec- Headquarters has prioritized outreach and discussion tion to determine the source and a potential limitation vs. an enforcement policy at this time. While this may of movement, up to detention to port.” He pointed out, change with new policy in the near future, here at Sector “TPOs are working with the USCG on a reasonable inter- New York we have had several meetings with industry and pretation of ‘watertight integrity’ to ensure that operators other speci? c forums to reach out to the towing industry who routinely use void spaces as temporary ballast tanks in an effort to encourage [Subchapter M] application sub- are not penalized for an industry practice which actually mittals. The ? rst year went fairly well, however we have promotes safe operation of towing vessels.” noted a slowdown in the second year across the industry

Whether the discussion turns to passengers, or to crew of vessel applications submitted to the Coast Guard, at and cargo, safety is a paramount consideration for the least here in N.Y.”

USCG. Cdr. Hobson in New York told Marine News: As the Subchapter M process enters its third year, the “One thing you may hear of from industry as ‘enforce- towing industry and regulators alike are bene? tting from ment’ or noncompliance is following a marine casualty. a “learning curve”, which includes a familiarity with pa-

While we do not see this as enforcement, there have been perwork and inspection procedures. As routines become cases that would result in a vessel being removed from ser- systematized, egregious de? ciencies (of the type that would vice following a reportable marine casualty or other failure require a detention) will stand out, enabling quicker and of the vessel that would present a potential hazard to the effective regulation. Cdr. Hobson stressed, “We are always port or the crew. In these cases, we have intervened as we willing to work with industry; safety is paramount.” would in any other case (with any other vessel type) to en- sure safe operation of the vessel for the crew and the port.”

In this context, the New York Waterway episode, and

Barry Parker, bdp1 Consulting Ltd the 655 towing vessel de? ciencies noted earlier (and the provides strategic and tactical support, in- nine actual detentions) can be seen as a very small price cluding analytics and communications, to to pay for safety. The USCG is working with industry in businesses across the maritime spectrum. a proactive way.

He freelances regularly for Marine News.