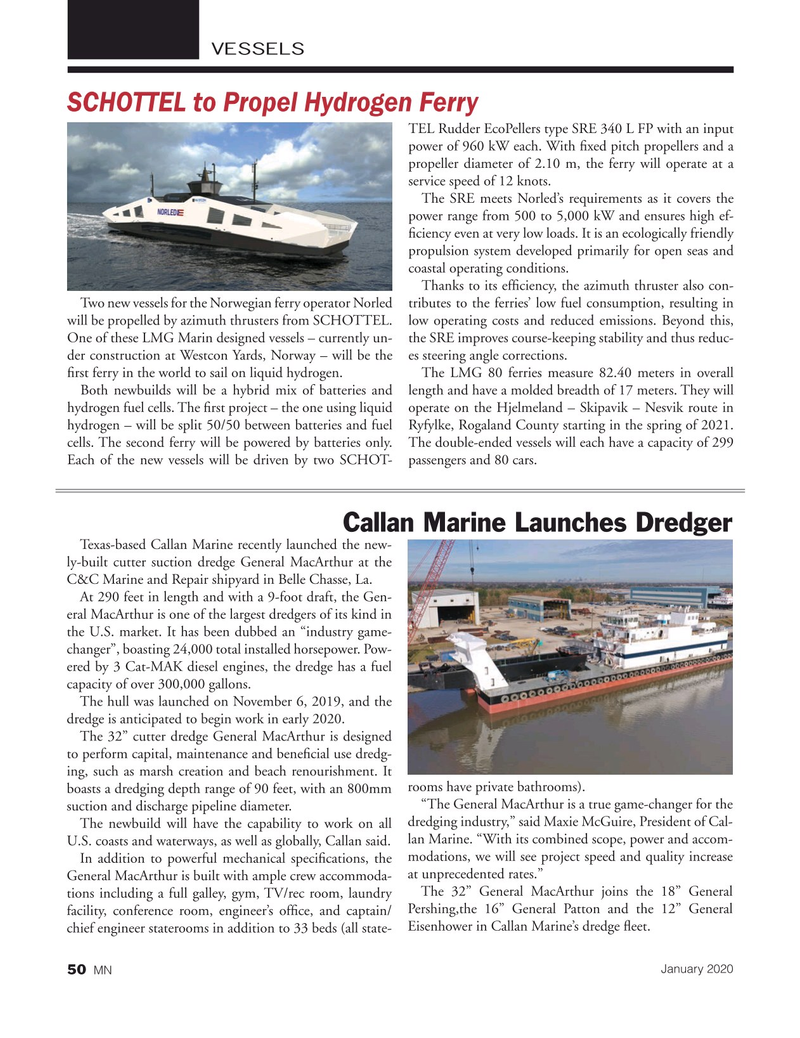 TEL Rudder EcoPellers type SRE 340 L FP with an input power of 960 kW each. With ? xed pitch propellers and a propeller diameter of 2.10 m, the ferry will operate at a service speed of 12 knots.

The SRE meets Norled’s requirements as it covers the power range from 500 to 5,000 kW and ensures high ef- ? ciency even at very low loads. It is an ecologically friendly propulsion system developed primarily for open seas and coastal operating conditions.

Thanks to its ef? ciency, the azimuth thruster also con-

Two new vessels for the Norwegian ferry operator Norled tributes to the ferries’ low fuel consumption, resulting in will be propelled by azimuth thrusters from SCHOTTEL. low operating costs and reduced emissions. Beyond this,

One of these LMG Marin designed vessels – currently un- the SRE improves course-keeping stability and thus reduc- der construction at Westcon Yards, Norway – will be the es steering angle corrections.

? rst ferry in the world to sail on liquid hydrogen. The LMG 80 ferries measure 82.40 meters in overall

Both newbuilds will be a hybrid mix of batteries and length and have a molded breadth of 17 meters. They will hydrogen fuel cells. The ? rst project – the one using liquid operate on the Hjelmeland – Skipavik – Nesvik route in hydrogen – will be split 50/50 between batteries and fuel Ryfylke, Rogaland County starting in the spring of 2021. cells. The second ferry will be powered by batteries only. The double-ended vessels will each have a capacity of 299

Each of the new vessels will be driven by two SCHOT- passengers and 80 cars.

At 290 feet in length and with a 9-foot draft, the Gen- eral MacArthur is one of the largest dredgers of its kind in the U.S. market. It has been dubbed an “industry game- changer”, boasting 24,000 total installed horsepower. Pow- ered by 3 Cat-MAK diesel engines, the dredge has a fuel capacity of over 300,000 gallons.

The hull was launched on November 6, 2019, and the dredge is anticipated to begin work in early 2020.

The 32” cutter dredge General MacArthur is designed to perform capital, maintenance and bene? cial use dredg- ing, such as marsh creation and beach renourishment. It boasts a dredging depth range of 90 feet, with an 800mm rooms have private bathrooms).

“The General MacArthur is a true game-changer for the suction and discharge pipeline diameter.

The newbuild will have the capability to work on all dredging industry,” said Maxie McGuire, President of Cal- lan Marine. “With its combined scope, power and accom-

U.S. coasts and waterways, as well as globally, Callan said.

In addition to powerful mechanical speci? cations, the modations, we will see project speed and quality increase at unprecedented rates.”

chief engineer staterooms in addition to 33 beds (all state-