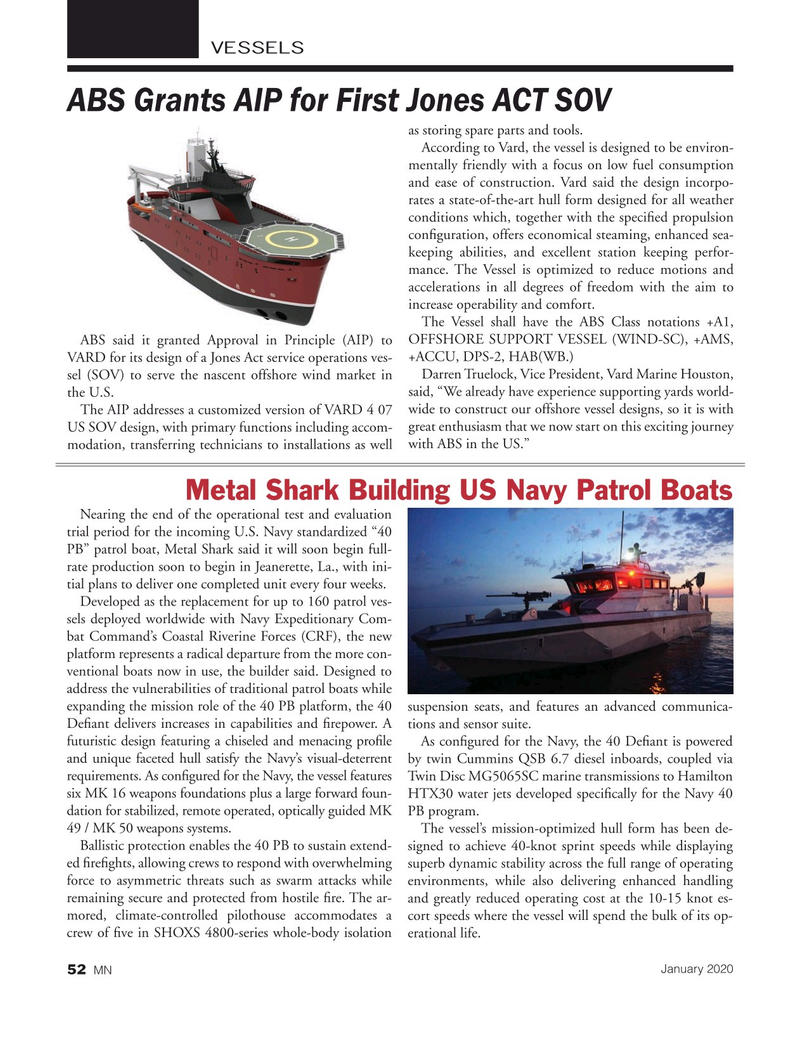 According to Vard, the vessel is designed to be environ- mentally friendly with a focus on low fuel consumption and ease of construction. Vard said the design incorpo- rates a state-of-the-art hull form designed for all weather conditions which, together with the speci? ed propulsion con? guration, offers economical steaming, enhanced sea- keeping abilities, and excellent station keeping perfor- mance. The Vessel is optimized to reduce motions and accelerations in all degrees of freedom with the aim to increase operability and comfort.

The Vessel shall have the ABS Class notations +A1,

The AIP addresses a customized version of VARD 4 07 wide to construct our offshore vessel designs, so it is with

US SOV design, with primary functions including accom- great enthusiasm that we now start on this exciting journey modation, transferring technicians to installations as well with ABS in the US.”

Nearing the end of the operational test and evaluation trial period for the incoming U.S. Navy standardized “40

Developed as the replacement for up to 160 patrol ves- sels deployed worldwide with Navy Expeditionary Com- bat Command’s Coastal Riverine Forces (CRF), the new platform represents a radical departure from the more con- ventional boats now in use, the builder said. Designed to address the vulnerabilities of traditional patrol boats while expanding the mission role of the 40 PB platform, the 40 suspension seats, and features an advanced communica-

De? ant delivers increases in capabilities and ? repower. A tions and sensor suite.

Ballistic protection enables the 40 PB to sustain extend- signed to achieve 40-knot sprint speeds while displaying ed ? re? ghts, allowing crews to respond with overwhelming superb dynamic stability across the full range of operating force to asymmetric threats such as swarm attacks while environments, while also delivering enhanced handling remaining secure and protected from hostile ? re. The ar- and greatly reduced operating cost at the 10-15 knot es- mored, climate-controlled pilothouse accommodates a cort speeds where the vessel will spend the bulk of its op- crew of ? ve in SHOXS 4800-series whole-body isolation erational life.