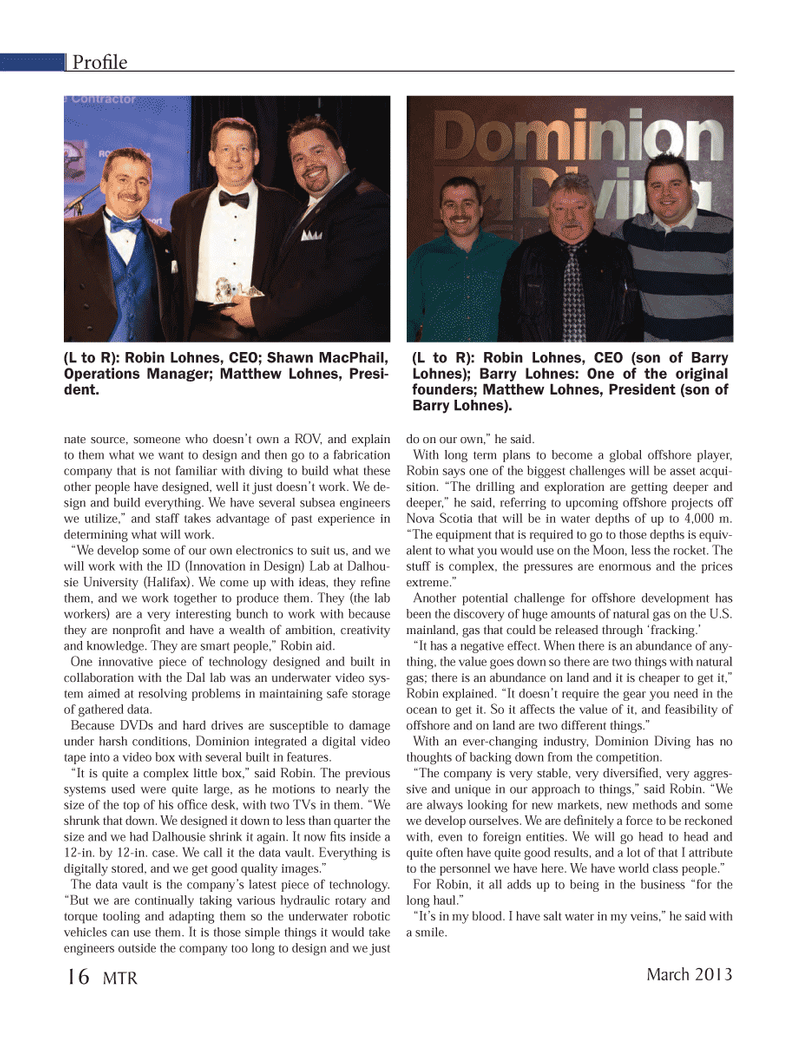 nate source, someone who doesn?t own a ROV, and explain to them what we want to design and then go to a fabrication company that is not familiar with diving to build what these other people have designed, well it just doesn?t work. We de- sign and build everything. We have several subsea engineers we utilize,? and staff takes advantage of past experience in determining what will work. ?We develop some of our own electronics to suit us, and we will work with the ID (Innovation in Design) Lab at Dalhou- sie University (Halifax). We come up with ideas, they re ne them, and we work together to produce them. They (the lab workers) are a very interesting bunch to work with because they are nonpro t and have a wealth of ambition, creativity and knowledge. They are smart people,? Robin aid. One innovative piece of technology designed and built in collaboration with the Dal lab was an underwater video sys- tem aimed at resolving problems in maintaining safe storage of gathered data.Because DVDs and hard drives are susceptible to damage under harsh conditions, Dominion integrated a digital video tape into a video box with several built in features. ?It is quite a complex little box,? said Robin. The previous systems used were quite large, as he motions to nearly the size of the top of his of ce desk, with two TVs in them. ?We shrunk that down. We designed it down to less than quarter the size and we had Dalhousie shrink it again. It now  ts inside a 12-in. by 12-in. case. We call it the data vault. Everything is digitally stored, and we get good quality images.? The data vault is the company?s latest piece of technology. ?But we are continually taking various hydraulic rotary and torque tooling and adapting them so the underwater robotic vehicles can use them. It is those simple things it would take engineers outside the company too long to design and we just do on our own,? he said. With long term plans to become a global offshore player, Robin says one of the biggest challenges will be asset acqui-sition. ?The drilling and exploration are getting deeper and deeper,? he said, referring to upcoming offshore projects off Nova Scotia that will be in water depths of up to 4,000 m. ?The equipment that is required to go to those depths is equiv- alent to what you would use on the Moon, less the rocket. The stuff is complex, the pressures are enormous and the prices extreme.? Another potential challenge for offshore development has been the discovery of huge amounts of natural gas on the U.S. mainland, gas that could be released through ?fracking.? ?It has a negative effect. When there is an abundance of any- thing, the value goes down so there are two things with natural gas; there is an abundance on land and it is cheaper to get it,? Robin explained. ?It doesn?t require the gear you need in the ocean to get it. So it affects the value of it, and feasibility of offshore and on land are two different things.? With an ever-changing industry, Dominion Diving has no thoughts of backing down from the competition. ?The company is very stable, very diversi ed, very aggres- sive and unique in our approach to things,? said Robin. ?We are always looking for new markets, new methods and some we develop ourselves. We are de nitely a force to be reckoned with, even to foreign entities. We will go head to head and quite often have quite good results, and a lot of that I attribute to the personnel we have here. We have world class people.? For Robin, it all adds up to being in the business ?for the long haul.? ?It?s in my blood. I have salt water in my veins,? he said with a smile. Pro le(L to R): Robin Lohnes, CEO; Shawn MacPhail, Operations Manager; Matthew Lohnes, Presi- dent.(L to R): Robin Lohnes, CEO (son of Barry Lohnes); Barry Lohnes: One of the original founders; Matthew Lohnes, President (son of Barry Lohnes). March 2013 16 MTRMTR #2 (1-17).indd 16MTR #2 (1-17).indd 163/5/2013 3:54:43 PM3/5/2013 3:54:43 PM