In sequel to our editorial in the March 2013 edition of MTR on activities related to the Research Moored Array for African-Asian-Australian Monsoon and Prediction Program (RAMA, Indian Ocean), we now update on new research underway in the Atlantic with Brazil’s climate monitoring work on the Prediction and Research Moored Array in the Tropical Atlantic  (PIRATA, Fig. 1, a cooperative research program between the U.S., Brazil and France) and other ocean sciences being conducted in the South Atlantic Convergence Zone (SACZ) of the western Atlantic Ocean.  In collaboration; the Institute of Oceanography, University of Sao Paulo, Brazil (IOUSP), AMBIDADOS, Rio de Janeiro (consultants in oceanographic instrumentation applications and data analysis) and RDSEA International, St. Pete Beach, FL, successfully deploy Brazil’s first internally integrated buoy and mooring system; ATLAS-B.

The SACZ is an important component of the ocean-atmosphere interaction over a large portion of South America.   For proper monitoring of this region, the southwest quadrant of PIRATA (also known as the PIRATA-Southwest Extension, PIRATA-SWE), four surface buoy locations were chosen with three systems deployed to the north in the tropical region of the SACZ, and the forth, ATLAS-B was deployed recently in April of this year (2013) at 28.5ºS and 44ºW.

In March 2004, the occurrence of an unusually strong extra-tropical storm over the subtropical South Atlantic, with characteristics of a Saffir-Simpson class-1 hurricane (the Catarina) near 28ºS reinforced the necessity of having a monitoring platform anchored in this region.  Catarina made its landfall along the southern coast of Brazil, on the March 28.  Maximum sustained winds were estimated between 75-80m/hr, with gusts up to 96m/hr.  The storm left at least three people dead and 38 injured.  More than 2,000 were rendered homeless.  This was the first documented hurricane in the South Atlantic Ocean since the beginning of geostationary satellite recording.

Brazilian climate is significantly influenced by air-sea interactions in the tropics and in the subtropical regions of the South Atlantic.  These interactions have been extensively studied and monitored for more than a decade by researchers on the PIRATA Program.  The majority of this research has been conducted to the north of the SACZ, a region of high precipitation, which impacts a large portion of terrestrial Brazilian territory.  Priority on PIRATA is making in-situ, high resolution time series measurements of surface heat flux, sea surface temperature (SST) and salinity and subsurface temperature and salinity in the upper 500m of the water column.  Using a network of “Autonomous Temperature Line Acquisition System” (ATLAS) buoy systems, initially designed by NOAA’s Pacific Marine Environmental Laboratory (PMEL, Seattle, Wash.), in the early 1980s, surface meteorological parameters; wind speed and direction, air temperature,  humidity, rainfall and solar radiation are also measured at each location.  Current velocity time series have also been added to the PIRATA data set via moored acoustic Doppler current profilers (ADCP, at strategic locations) as well as the many shipboard profiles collected from oceanographic research cruises conducted in the Atlantic region.  Each ATLAS buoy system is serviced annually with systems calibration of all sensors completed post cruise and made ready for redeployment.

Data from the array are posted on the Global Telecommunications Network (GTS) by Service Argos (the main source of buoy telemetry) and Brazilian satellite transmissions for real-time distribution to operational centers and modeling communities.  Model validation is critical. PIRATA data were instrumental in monitoring the record high SST of the tropical North Atlantic in 2005 which contributed to the unusual hurricane season that year, the most active and destructive on record.

ATLAS-B
The ATLAS system continues to evolve today with various upgraded technology and design changes incorporated into the global network.  To enhance the PIRATA array in its capability of providing data for weather and climate forecasting, and to better understand the variability of the SACZ region, efforts began in 2009 to develop, build and deploy a new prototype buoy system internally, in Brazil.  The first system, ATLAS-B, nicknamed “Guariroba” (an endangered palm tree native to central-western Brazil, birthplace of Prof. Edmo Campos, ATLAS-B project Principal Investigator)  was assembled using a retired ATLAS buoy provided by PMEL to the IOUSP, a now standard buoy system in the Global Tropical Moored Buoy Array of TAO, RAMA and PIRATA.  The buoy consists of a 2.3m fiberglass/foam core toroid with a three-point aluminum tower and stainless steel bridle.  Off-the-shelf electronic components and instruments for ATLAS-B were chosen to closely mirror data already being transmitted from PIRATA.

Surface meteorology on ATLAS-B is measured with a Vaisala WXT520 weather station: air temperature, relative humidity, barometric pressure, precipitation, wind speed and direction mounted on a mast at 4m above sea level.  Radiation is measured using an Eppley radiometer and pyranometer for short and long wave sampling at 3.5m.  SST and conductivity (salinity) are handled via a bridle mounted Sea-Bird Electronics SBE-37 MicroCat directly connected to the controller.  Sub-surface temperature and conductivity are measured at: 20, 40, 60, 80, 100, 120, 140, 180, 300 and 500m.  Redundant pressure is included at 300m and 500m.  Data acquisition rate varies and is stored in memory.  All in-water data are transmitted to the buoy controller by the process of “induction” using Sea-Bird Inductive Modem Modules (IMM, a master SIM board in the buoy controller and one IMM internally integrated into each SBE-37).

The mooring cable is used as the transmission medium, eliminating the need to cable connect each sensor.   The IMM transmits sensor data to the surface by applying a signal to the internal winding of an “inductive cable coupler” (ICC).  This induces a signal in the single-turn secondary winding formed by the mooring cable passing through the ICC.  The SIM at the surface receives the signal from each sensor using configured system ID numbers (01 -10).  The buoy controller and all systems integration were completed by AMBIDADOS in Rio.  The data logger is a Campbell Scientific CR1000 with daily data telemetry undertaken by an onboard INMARSAT transmitter, a Skywave IsatData Pro with and integrated GPS system for buoy positioning and watch circle monitoring.  A second, positioning device (GlobalStar Tracker) is also installed on the tower shelf for back-up buoy position monitoring should the Skywave system go down.  The complete system is powered by an onboard battery pack that supplies the necessary power for a 12-month deployment.

The mooring chosen for the ATLAS-B application is a semi-taut design where the length of the mooring is slightly longer than the site depth (scope of: 1.05).  Not quite taut (0.985) and not slack.  This approach allows more forgiveness in nylon elongation (stretch) while keeping the in-water sensors at or close to the desired measurement location within the water column.  700m of 3/8” jacketed wire rope (3x19), a standard in ATLAS and other mooring applications and a necessary component for the induction process, is used in the upper mooring.  The wire rope also helps protect against shark and fish bite in the surface region of the mooring.  At the buoy to mooring bridge (mooring connection point) an “inductive jumper” (J. Kinder, J. Cappellini) is used for the transfer of all sub-surface data to the buoy controller.  This allows for the ICC to be buoy mounted on the bridle vs. mounting on the mooring, a more robust option for a long-term deployment.  The upper swedge fitting is tapped for the bare end of the jumper cable to be inserted and secured with a series of hex-screws and epoxy then the entire termination is made water proof using rubber, tape and a two-part epoxy coating.  The buoy end of the jumper is bolted to the bridle transferring the salt water ground from the mooring to the buoy.  From 700m down to the acoustic releases, mounted just above the anchor is 18mm diameter nylon fiber rope married together with shackles and sling links in 500m sections.   Glass ball flotation is distributed throughout the mooring to keep tension on the system and is used as backup flotation for system recovery should the buoy break away from the mooring.  A shot of 20mm nylon is used between the acoustic releases and railroad wheel anchor along with a short section of chain.

Deployment
Once all systems components were built and tested in Rio, ATLAS-B was sent to the small sea-side village of Ubatuba, Sao Paulo, about a four-hour drive south of Rio de Janeiro.  IOSUP has a satellite campus here with a small research vessel available to faculty and students for offshore projects.  ATLAS-B was moored a short distance from the pier for a “wet-test” prior to the trip offshore to the Atlantic.  Research Vessel Alpha Crucis (formerly RV Moana Wave of the Univ. of Hawaii now owned and operated by the IOUSP) arrived at Ubatuba to load the buoy, systems components and the science team.  On April 22, after a short few days transit, ATLAS-B was deployed at position 28º 30’S / 44º 00’W at a depth of 3,700m with 100% data transmission.  Times series of daily data are being received and processed and are publically available at ftp://ftp.io.usp.br/labmon/ATLAS-B.  Quality control and analysis are conducted to transfer the data onto the GTS network.  Buoy data are compared to the National Center for Environmental Prediction (NCEP) Reanalysis data set (data that incorporates in-situ measurements with numerical models and is continuously updated representing the Earth’s atmosphere).  All data compares well with exception of some normal aches and pains of a prototype buoy system design and a first deployment.

Conclusion
The development of a Brazilian alternative for the ATLAS buoy and mooring system can be considered a great success.  This was the first time a complete design, assembly and deployment of such a deep water monitoring platform was carried out exclusively in Brazil.  The present site will be maintained as a pilot project for a few years and once the ATLAS-B design proves itself capable and scientifically valuable it will be transformed into a sustained observing component of the Brazilian climate research program.  A second ATLAS-B system is being constructed now, to be built entirely in Brazil, including the buoy.  This system will replace the prototype upon recovery in early 2014.

Acknowledgement
Corresponding authors:  Carlos Franca, Luiz Nonnato and Francisco Vicentini, IOUSP.  This research activity has been conducted with support from the Brazilian National Institute of Science and Technology for Climate Change (INCT-MC), funded by the Brazilian National Council for Scientific and Technological Development (CNPq) and the Sao Paulo State Foundation for Scientific Research (FAPESP).  The ATLAS-B oceanographic cruises are conducted on board the Research Vessel Alpha Crucis, purchased with funds from FAPESP.  Figure 1 courtesy of: P. Brandt, GEOMAR, Helmholtz Centre for Ocean Research Kiel, Germany, http://www.geomar.de. PIRATA information was pulled from:  http://www.pmel.noaa.gov/pirata/ maintained by NOAA, PMEL and the Bulletin of the American Meteorological Societies (BAMS), August, 2008 edition (Bourles et. al).  We acknowledge the hard work by all involved to get ATLAS-B to sea and successfully transmitting data to shore.

Further pictorial and video of the ATLAS-B cruise can be seen at:  www.rdsea.com

(As published in the September 2013 edition of Marine Technology Reporter - www.seadiscovery.com) 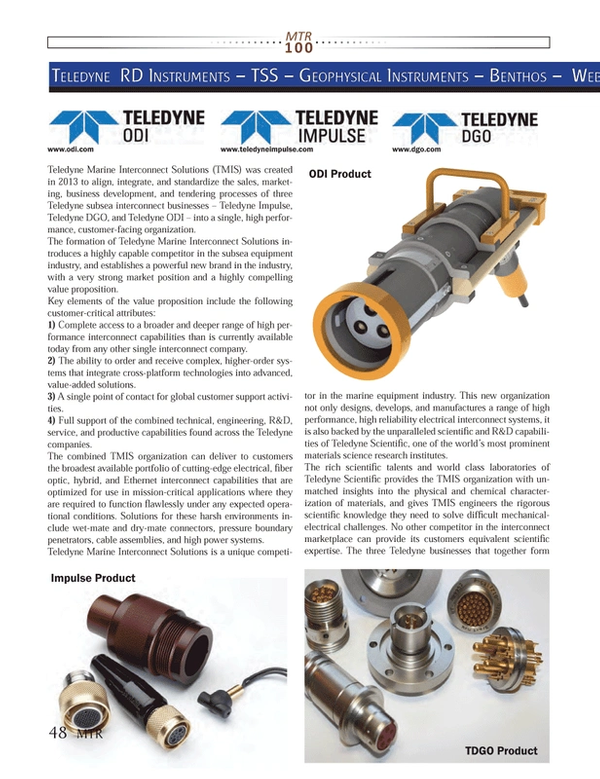