The Company
Historically, the sheer magnitude of the ocean has made comprehensive exploration unfeasible. Hydroid is changing that with its full-picture REMUS AUVs. These unmanned underwater robots offer a flexible alternative to surface vessels. They can glide along the surface, dive to deep depths, explore shallow waters or hover in hazardous areas where navigation is difficult. Hydroid AUVs have reduced the high costs of ocean exploration and sampling while increasing the availability, quality and quantity of scientific marine data. Using Hydroid AUVs for undersea mine reconnaissance has helped save lives by eliminating human divers from mine fields, and the customizable robots have helped solve plane and ship disaster mysteries. Hydroid AUVs also provide scientists data on pressing global issues including climate change, the world’s declining fish population and environmental disasters. As leader of the team that originally developed the REMUS AUV at Woods Hole Oceanographic Institution (WHOI), Christopher von Alt’s knowledge of the intricate technology has been integral to the products’ development and widespread adoption. After years of fabricating and developing the REMUS vehicle at WHOI, in 2001 von Alt co-founded Hydroid, creating an independent company to commercially manufacture, support and further develop the REMUS systems. In 2008 Hydroid was acquired by Kongsberg Gruppen. 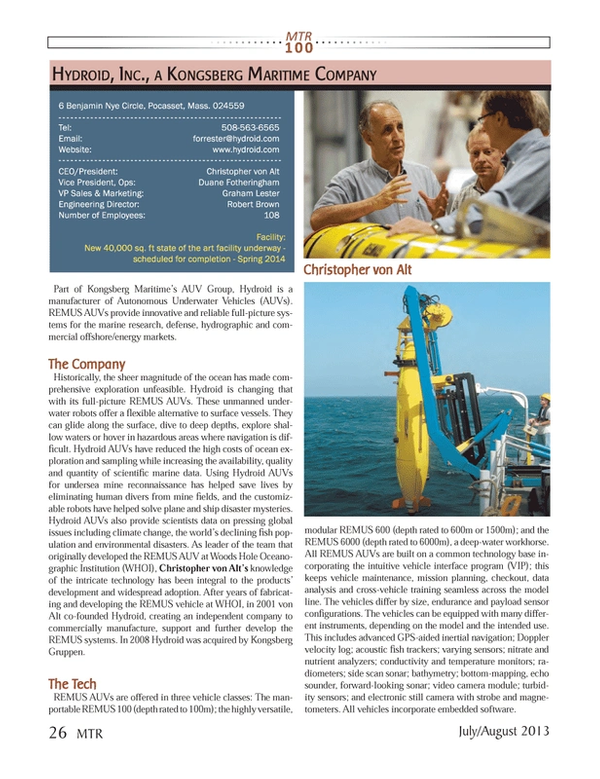