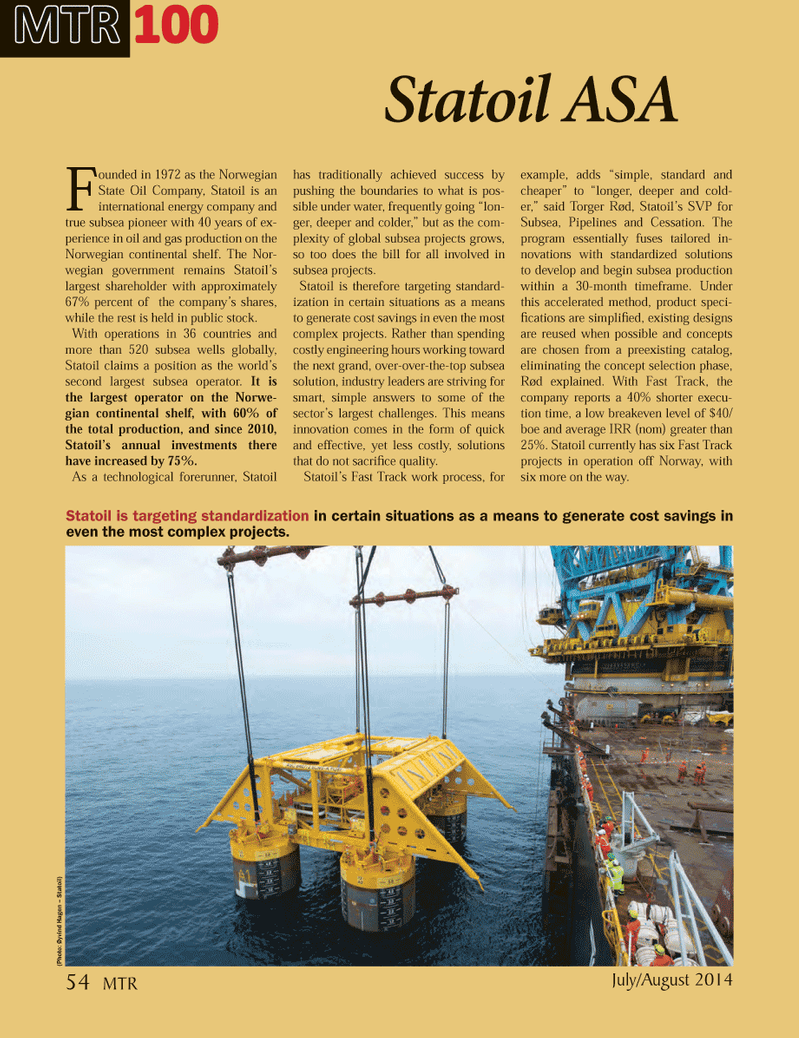 Founded in 1972 as the Norwegian State Oil Company, Statoil is an international energy company and true subsea pioneer with 40 years of ex- perience in oil and gas production on the Norwegian continental shelf. The Nor- wegian government remains Statoil?s largest shareholder with approximately 67% percent of the company?s shares, while the rest is held in public stock. With operations in 36 countries and more than 520 subsea wells globally, Statoil claims a position as the world?s second largest subsea operator. It is the largest operator on the Norwe- gian continental shelf, with 60% of the total production, and since 2010, Statoil?s annual investments there have increased by 75%. As a technological forerunner, Statoil has traditionally achieved success by pushing the boundaries to what is pos-sible under water, frequently going ?lon- ger, deeper and colder,? but as the com- plexity of global subsea projects grows, so too does the bill for all involved in subsea projects. Statoil is therefore targeting standard- ization in certain situations as a means to generate cost savings in even the most complex projects. Rather than spending costly engineering hours working toward the next grand, over-over-the-top subsea solution, industry leaders are striving for smart, simple answers to some of the sector?s largest challenges. This means innovation comes in the form of quick and effective, yet less costly, solutions that do not sacri ce quality. Statoil?s Fast Track work process, for example, adds ?simple, standard and cheaper? to ?longer, deeper and cold- er,? said Torger Rød, Statoil?s SVP for Subsea, Pipelines and Cessation. The program essentially fuses tailored in-novations with standardized solutions to develop and begin subsea production within a 30-month timeframe. Under this accelerated method, product speci- cations are simpli ed, existing designs are reused when possible and concepts are chosen from a preexisting catalog, eliminating the concept selection phase, Rød explained. With Fast Track, the company reports a 40% shorter execu- tion time, a low breakeven level of $40/ boe and average IRR (nom) greater than 25%. Statoil currently has six Fast Track projects in operation off Norway, with six more on the way. Statoil ASA Statoil is targeting standardization in certain situations as a means to generate cost savings in even the most complex projects. (Photo: Øyvind Hagen ? Statoil) MTR MTR 100 100July/August 2014 54 MTRMTR #6 (50-65).indd 54MTR #6 (50-65).indd 547/31/2014 9:59:27 AM7/31/2014 9:59:27 AM