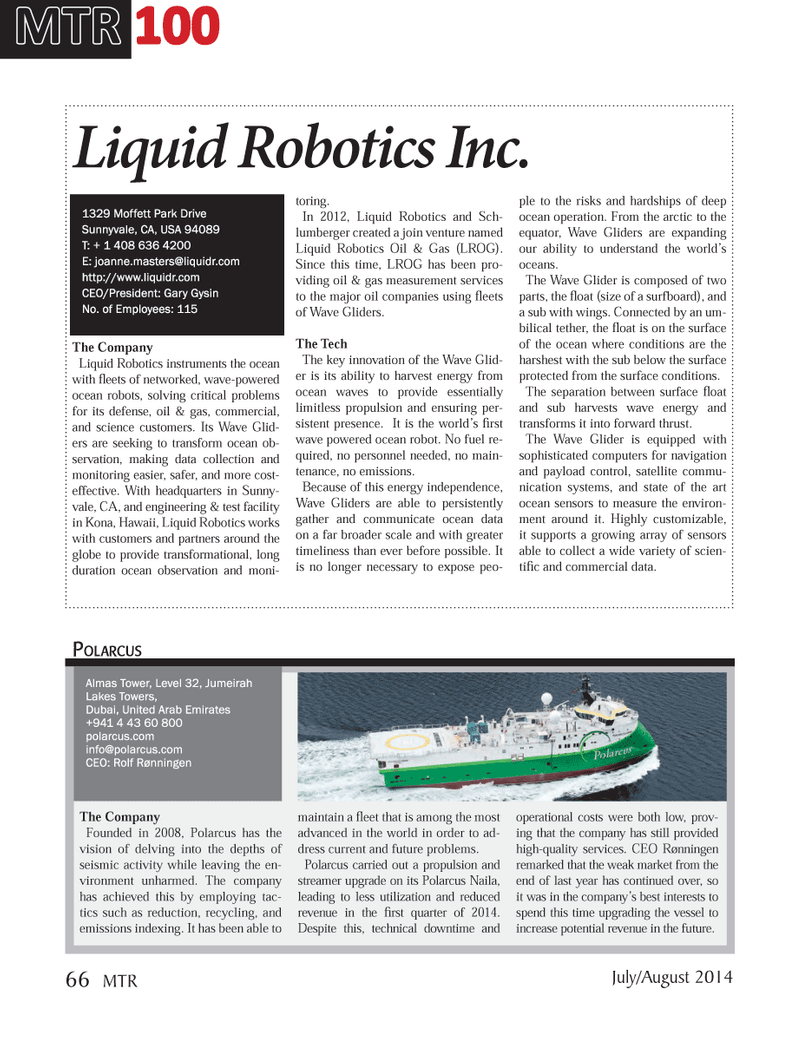 MTR MTR 100 100The Company Liquid Robotics instruments the ocean with ß eets of networked, wave-powered ocean robots, solving critical problems for its defense, oil & gas, commercial, and science customers. Its Wave Glid- ers are seeking to transform ocean ob-servation, making data collection and monitoring easier, safer, and more cost- effective. With headquarters in Sunny- vale, CA, and engineering & test facility in Kona, Hawaii, Liquid Robotics works with customers and partners around the globe to provide transformational, long duration ocean observation and moni- toring. In 2012, Liquid Robotics and Sch-lumberger created a join venture named Liquid Robotics Oil & Gas (LROG). Since this time, LROG has been pro- viding oil & gas measurement services to the major oil companies using ß eets of Wave Gliders. The Tech The key innovation of the Wave Glid- er is its ability to harvest energy from ocean waves to provide essentially limitless propulsion and ensuring per- sistent presence. It is the worldÕs Þ rst wave powered ocean robot. No fuel re- quired, no personnel needed, no main-tenance, no emissions. Because of this energy independence, Wave Gliders are able to persistently gather and communicate ocean data on a far broader scale and with greater timeliness than ever before possible. It is no longer necessary to expose peo- ple to the risks and hardships of deep ocean operation. From the arctic to the equator, Wave Gliders are expanding our ability to understand the worldÕs oceans. The Wave Glider is composed of two parts, the ß oat (size of a surfboard), and a sub with wings. Connected by an um-bilical tether, the ß oat is on the surface of the ocean where conditions are the harshest with the sub below the surface protected from the surface conditions. The separation between surface ß oat and sub harvests wave energy and transforms it into forward thrust. The Wave Glider is equipped with sophisticated computers for navigation and payload control, satellite commu-nication systems, and state of the art ocean sensors to measure the environ- ment around it. Highly customizable, it supports a growing array of sensors able to collect a wide variety of scien- tiÞ c and commercial data. 1329 Moffett Park Drive 1329 Moffett Park Drive Sunnyvale, CA, USA 94089 Sunnyvale, CA, USA 94089 T: + 1 408 636 4200 T: + 1 408 636 4200 E: joanne.masters@liquidr.com E: joanne.masters@liquidr.com http://www.liquidr.com http://www.liquidr.com CEO/President: Gary Gysin CEO/President: Gary Gysin No. of Employees: 115 No. of Employees: 115 Liquid Robotics Inc. The CompanyFounded in 2008, Polarcus has the vision of delving into the depths of seismic activity while leaving the en- vironment unharmed. The company has achieved this by employing tac- tics such as reduction, recycling, and emissions indexing. It has been able to maintain a ß eet that is among the most advanced in the world in order to ad- dress current and future problems.Polarcus carried out a propulsion and streamer upgrade on its Polarcus Naila, leading to less utilization and reduced revenue in the Þ rst quarter of 2014. Despite this, technical downtime and operational costs were both low, prov- ing that the company has still provided high-quality services. CEO R¿nningen remarked that the weak market from the end of last year has continued over, so it was in the companyÕs best interests to spend this time upgrading the vessel to increase potential revenue in the future. POLARCUS POLARCUS Almas Tower, Level 32, Jumeirah Almas Tower, Level 32, Jumeirah Lakes Towers, Lakes Towers, Dubai, United Arab Emirates Dubai, United Arab Emirates +941 4 43 60 800 +941 4 43 60 800 polarcus.com polarcus.com info@polarcus.com info@polarcus.com CEO: Rolf Rønningen CEO: Rolf Rønningen July/August 2014 66 MTRMTR #6 (66-81).indd 66MTR #6 (66-81).indd 667/31/2014 10:05:06 AM7/31/2014 10:05:06 AM