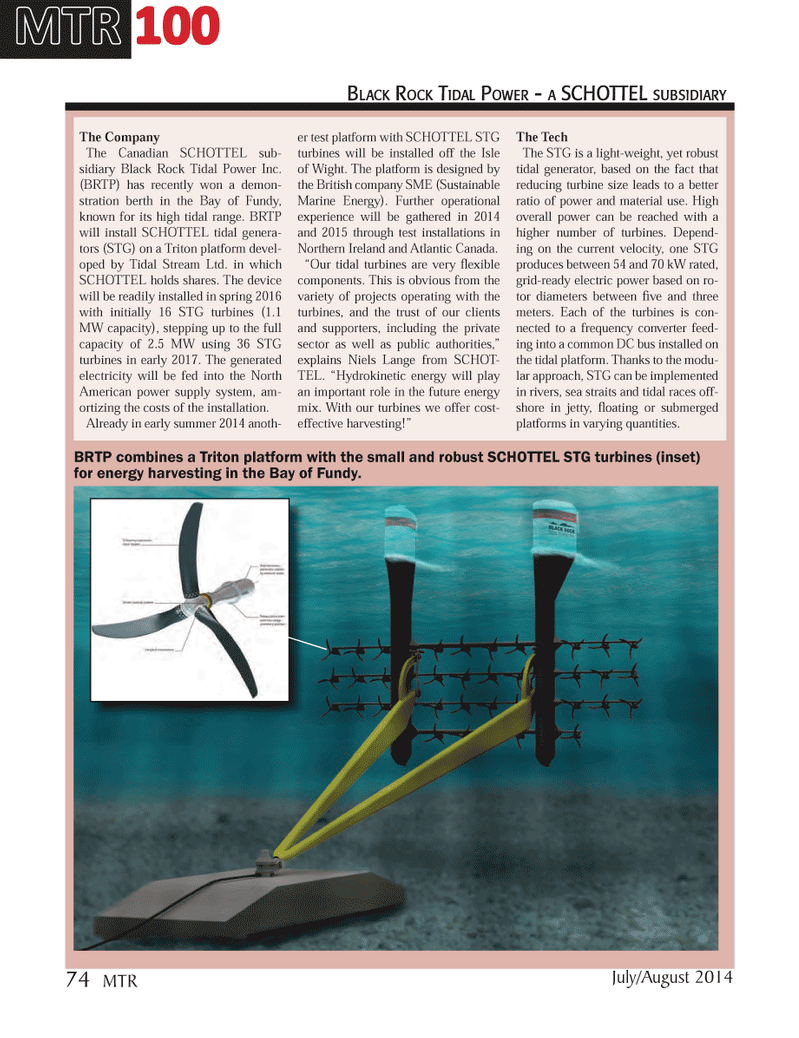 MTR MTR 100 100The CompanyThe Canadian SCHOTTEL sub- sidiary Black Rock Tidal Power Inc. (BRTP) has recently won a demon- stration berth in the Bay of Fundy, known for its high tidal range. BRTP will install SCHOTTEL tidal genera- tors (STG) on a Triton platform devel- oped by Tidal Stream Ltd. in which SCHOTTEL holds shares. The device will be readily installed in spring 2016 with initially 16 STG turbines (1.1 MW capacity), stepping up to the full capacity of 2.5 MW using 36 STG turbines in early 2017. The generated electricity will be fed into the North American power supply system, am- ortizing the costs of the installation.Already in early summer 2014 anoth-er test platform with SCHOTTEL STG turbines will be installed off the Isle of Wight. The platform is designed by the British company SME (Sustainable Marine Energy). Further operational experience will be gathered in 2014 and 2015 through test installations in Northern Ireland and Atlantic Canada. ?Our tidal turbines are very  exible components. This is obvious from the variety of projects operating with the turbines, and the trust of our clients and supporters, including the private sector as well as public authorities,? explains Niels Lange from SCHOT- TEL. ?Hydrokinetic energy will play an important role in the future energy mix. With our turbines we offer cost- effective harvesting!? The Tech The STG is a light-weight, yet robust tidal generator, based on the fact that reducing turbine size leads to a better ratio of power and material use. High overall power can be reached with a higher number of turbines. Depend-ing on the current velocity, one STG produces between 54 and 70 kW rated, grid-ready electric power based on ro- tor diameters between  ve and three meters. Each of the turbines is con-nected to a frequency converter feed- ing into a common DC bus installed on the tidal platform. Thanks to the modu- lar approach, STG can be implemented in rivers, sea straits and tidal races off- shore in jetty,  oating or submerged platforms in varying quantities. BLACK ROCK TIDAL POWER - A SCHOTTEL SUBSIDIARY BLACK ROCK TIDAL POWER - A SCHOTTEL SUBSIDIARY BRTP combines a Triton platform with the small and robust SCHOTTEL STG turbines (inset) for energy harvesting in the Bay of Fundy. July/August 2014 74 MTRMTR #6 (66-81).indd 74MTR #6 (66-81).indd 747/31/2014 10:09:15 AM7/31/2014 10:09:15 AM