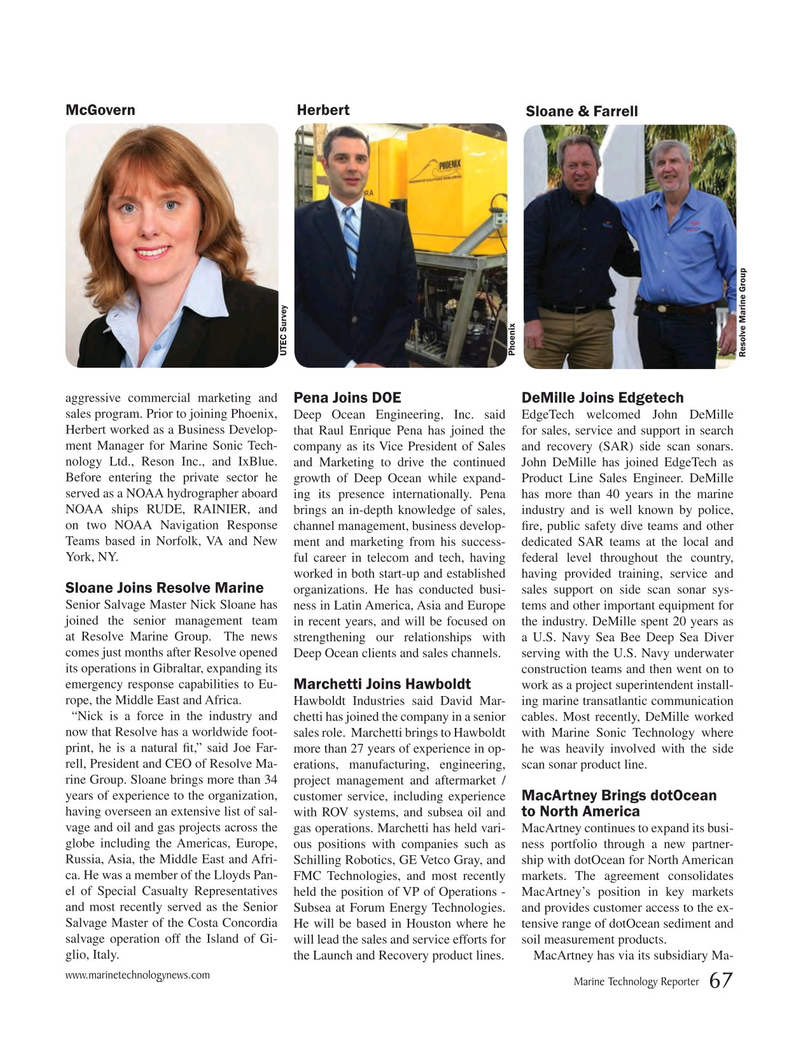 Herbert worked as a Business Develop- that Raul Enrique Pena has joined the for sales, service and support in search ment Manager for Marine Sonic Tech- company as its Vice President of Sales and recovery (SAR) side scan sonars. nology Ltd., Reson Inc., and IxBlue. and Marketing to drive the continued John DeMille has joined EdgeTech as

Before entering the private sector he growth of Deep Ocean while expand- Product Line Sales Engineer. DeMille served as a NOAA hydrographer aboard ing its presence internationally. Pena has more than 40 years in the marine

Teams based in Norfolk, VA and New ment and marketing from his success- dedicated SAR teams at the local and

York, NY. ful career in telecom and tech, having federal level throughout the country, worked in both start-up and established having provided training, service and

Senior Salvage Master Nick Sloane has ness in Latin America, Asia and Europe tems and other important equipment for joined the senior management team in recent years, and will be focused on the industry. DeMille spent 20 years as at Resolve Marine Group. The news strengthening our relationships with a U.S. Navy Sea Bee Deep Sea Diver comes just months after Resolve opened Deep Ocean clients and sales channels. serving with the U.S. Navy underwater its operations in Gibraltar, expanding its construction teams and then went on to emergency response capabilities to Eu- work as a project superintendent install-

Marchetti Joins Hawboldt rope, the Middle East and Africa. Hawboldt Industries said David Mar- ing marine transatlantic communication “Nick is a force in the industry and chetti has joined the company in a senior cables. Most recently, DeMille worked now that Resolve has a worldwide foot- sales role. Marchetti brings to Hawboldt with Marine Sonic Technology where print, he is a natural ? t,” said Joe Far- more than 27 years of experience in op- he was heavily involved with the side rell, President and CEO of Resolve Ma- erations, manufacturing, engineering, scan sonar product line.

rine Group. Sloane brings more than 34 project management and aftermarket / years of experience to the organization, customer service, including experience

MacArtney Brings dotOcean having overseen an extensive list of sal- with ROV systems, and subsea oil and to North America vage and oil and gas projects across the gas operations. Marchetti has held vari- MacArtney continues to expand its busi- globe including the Americas, Europe, ous positions with companies such as ness portfolio through a new partner-

Russia, Asia, the Middle East and Afri- Schilling Robotics, GE Vetco Gray, and ship with dotOcean for North American ca. He was a member of the Lloyds Pan- FMC Technologies, and most recently markets. The agreement consolidates el of Special Casualty Representatives held the position of VP of Operations - MacArtney’s position in key markets and most recently served as the Senior Subsea at Forum Energy Technologies. and provides customer access to the ex-

Salvage Master of the Costa Concordia He will be based in Houston where he tensive range of dotOcean sediment and salvage operation off the Island of Gi- will lead the sales and service efforts for soil measurement products.

glio, Italy. the Launch and Recovery product lines. MacArtney has via its subsidiary Ma- www.marinetechnologynews.com