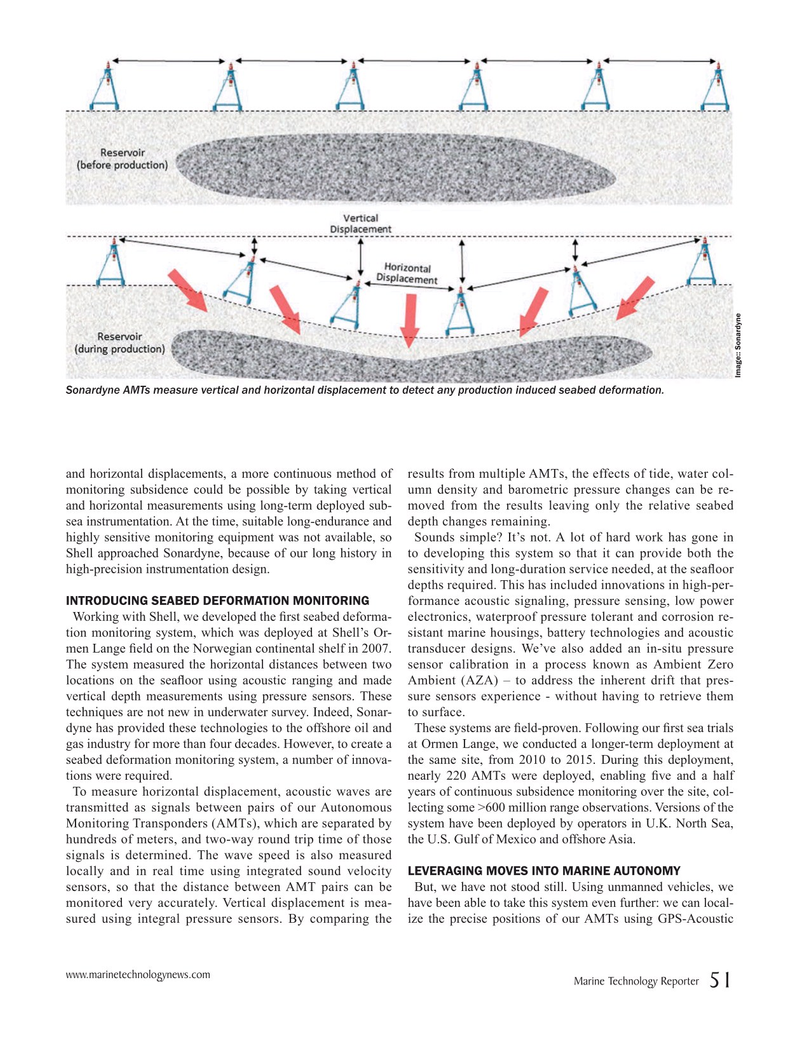 and horizontal displacements, a more continuous method of results from multiple AMTs, the effects of tide, water col- monitoring subsidence could be possible by taking vertical umn density and barometric pressure changes can be re- and horizontal measurements using long-term deployed sub- moved from the results leaving only the relative seabed sea instrumentation. At the time, suitable long-endurance and depth changes remaining.

highly sensitive monitoring equipment was not available, so Sounds simple? It’s not. A lot of hard work has gone in

Shell approached Sonardyne, because of our long history in to developing this system so that it can provide both the high-precision instrumentation design. sensitivity and long-duration service needed, at the sea? oor depths required. This has included innovations in high-per-

The system measured the horizontal distances between two sensor calibration in a process known as Ambient Zero locations on the sea? oor using acoustic ranging and made Ambient (AZA) – to address the inherent drift that pres- vertical depth measurements using pressure sensors. These sure sensors experience - without having to retrieve them techniques are not new in underwater survey. Indeed, Sonar- to surface.

dyne has provided these technologies to the offshore oil and These systems are ? eld-proven. Following our ? rst sea trials gas industry for more than four decades. However, to create a at Ormen Lange, we conducted a longer-term deployment at seabed deformation monitoring system, a number of innova- the same site, from 2010 to 2015. During this deployment, tions were required. nearly 220 AMTs were deployed, enabling ? ve and a half

To measure horizontal displacement, acoustic waves are years of continuous subsidence monitoring over the site, col- transmitted as signals between pairs of our Autonomous lecting some >600 million range observations. Versions of the

Monitoring Transponders (AMTs), which are separated by system have been deployed by operators in U.K. North Sea, hundreds of meters, and two-way round trip time of those the U.S. Gulf of Mexico and offshore Asia.

signals is determined. The wave speed is also measured locally and in real time using integrated sound velocity LEVERAGING MOVES INTO MARINE AUTONOMY sensors, so that the distance between AMT pairs can be But, we have not stood still. Using unmanned vehicles, we monitored very accurately. Vertical displacement is mea- have been able to take this system even further: we can local- sured using integral pressure sensors. By comparing the ize the precise positions of our AMTs using GPS-Acoustic www.marinetechnologynews.com