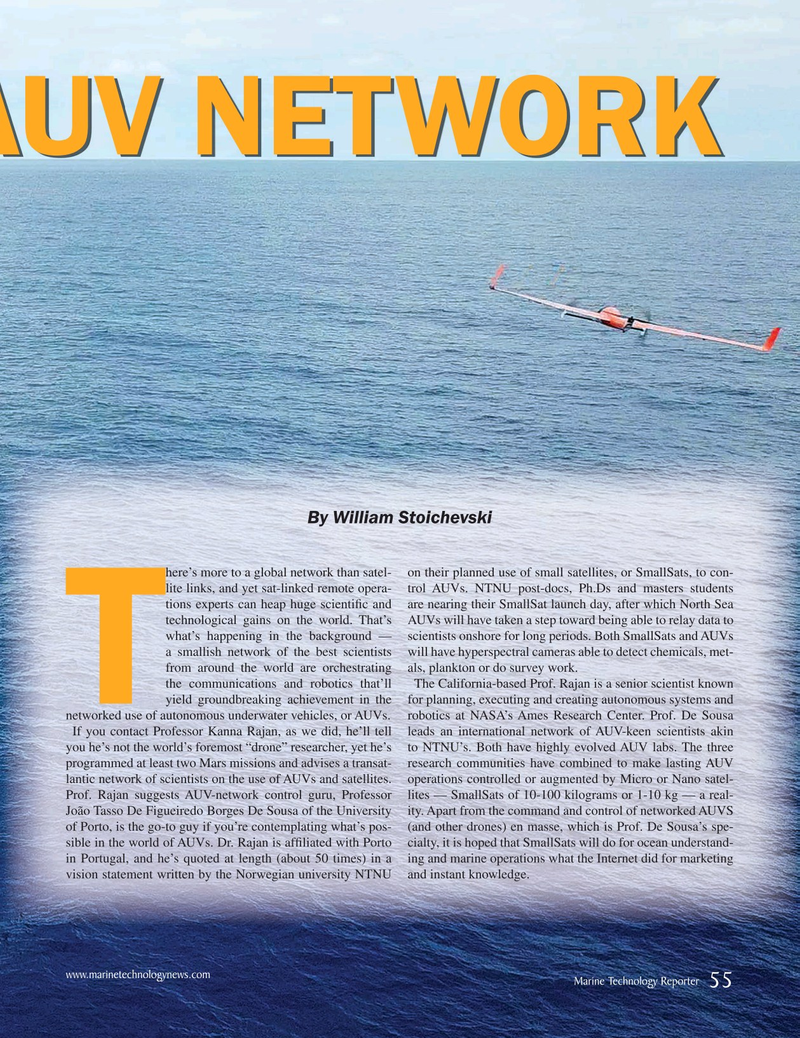 By William Stoichevski here’s more to a global network than satel- on their planned use of small satellites, or SmallSats, to con- lite links, and yet sat-linked remote opera- trol AUVs. NTNU post-docs, Ph.Ds and masters students tions experts can heap huge scienti? c and are nearing their SmallSat launch day, after which North Sea technological gains on the world. That’s AUVs will have taken a step toward being able to relay data to what’s happening in the background — scientists onshore for long periods. Both SmallSats and AUVs a smallish network of the best scientists will have hyperspectral cameras able to detect chemicals, met- from around the world are orchestrating als, plankton or do survey work.

the communications and robotics that’ll The California-based Prof. Rajan is a senior scientist known

Tyield groundbreaking achievement in the for planning, executing and creating autonomous systems and networked use of autonomous underwater vehicles, or AUVs. robotics at NASA’s Ames Research Center. Prof. De Sousa

If you contact Professor Kanna Rajan, as we did, he’ll tell leads an international network of AUV-keen scientists akin you he’s not the world’s foremost “drone” researcher, yet he’s to NTNU’s. Both have highly evolved AUV labs. The three programmed at least two Mars missions and advises a transat- research communities have combined to make lasting AUV lantic network of scientists on the use of AUVs and satellites. operations controlled or augmented by Micro or Nano satel-

João Tasso De Figueiredo Borges De Sousa of the University ity. Apart from the command and control of networked AUVS of Porto, is the go-to guy if you’re contemplating what’s pos- (and other drones) en masse, which is Prof. De Sousa’s spe- sible in the world of AUVs. Dr. Rajan is af? liated with Porto cialty, it is hoped that SmallSats will do for ocean understand- in Portugal, and he’s quoted at length (about 50 times) in a ing and marine operations what the Internet did for marketing vision statement written by the Norwegian university NTNU and instant knowledge. www.marinetechnologynews.com