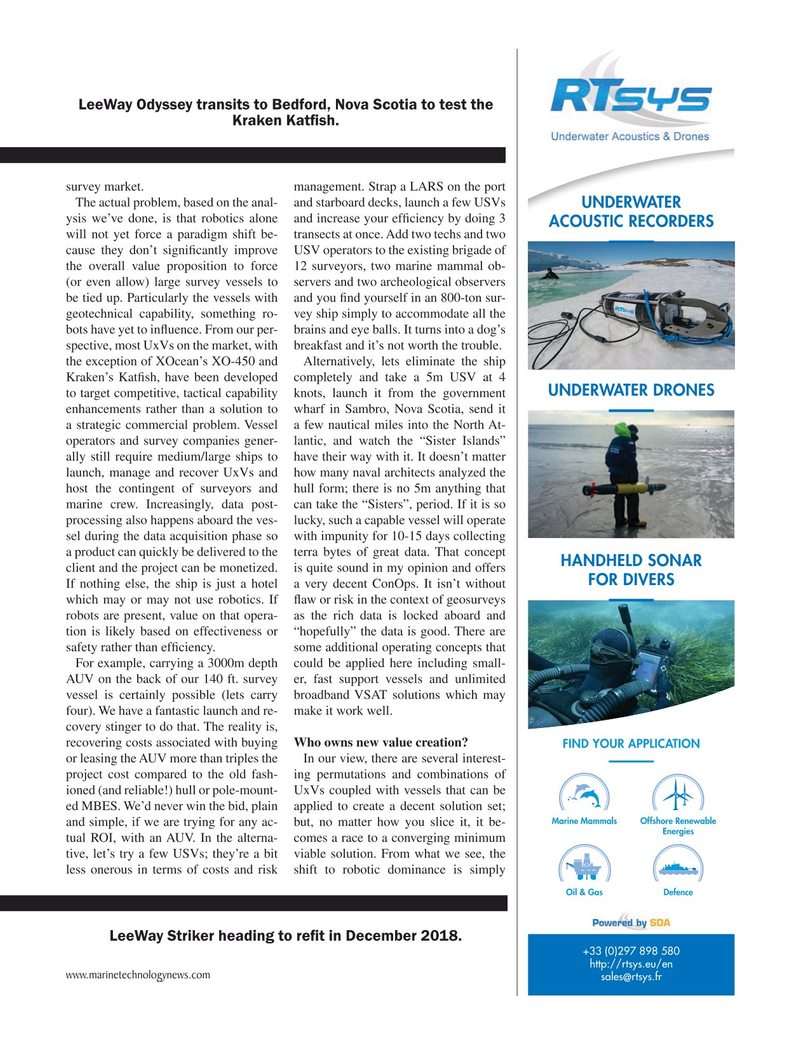 LeeWay Odyssey transits to Bedford, Nova Scotia to test the

survey market. management. Strap a LARS on the port

UNDERWATER UNDERWATER ysis we’ve done, is that robotics alone and increase your ef? ciency by doing 3

ACOUSTIC RECORDERSACOUSTIC RECORDERS will not yet force a paradigm shift be- transects at once. Add two techs and two cause they don’t signi? cantly improve USV operators to the existing brigade of the overall value proposition to force 12 surveyors, two marine mammal ob- (or even allow) large survey vessels to servers and two archeological observers be tied up. Particularly the vessels with and you ? nd yourself in an 800-ton sur- geotechnical capability, something ro- vey ship simply to accommodate all the bots have yet to in? uence. From our per- brains and eye balls. It turns into a dog’s spective, most UxVs on the market, with breakfast and it’s not worth the trouble. the exception of XOcean’s XO-450 and Alternatively, lets eliminate the ship

Kraken’s Kat? sh, have been developed completely and take a 5m USV at 4

UNDERWATER DRONES to target competitive, tactical capability knots, launch it from the government enhancements rather than a solution to wharf in Sambro, Nova Scotia, send it a strategic commercial problem. Vessel a few nautical miles into the North At- operators and survey companies gener- lantic, and watch the “Sister Islands” ally still require medium/large ships to have their way with it. It doesn’t matter launch, manage and recover UxVs and how many naval architects analyzed the host the contingent of surveyors and hull form; there is no 5m anything that marine crew. Increasingly, data post- can take the “Sisters”, period. If it is so processing also happens aboard the ves- lucky, such a capable vessel will operate sel during the data acquisition phase so with impunity for 10-15 days collecting a product can quickly be delivered to the terra bytes of great data. That concept

HANDHELD SONAR client and the project can be monetized. is quite sound in my opinion and offers

If nothing else, the ship is just a hotel a very decent ConOps. It isn’t without which may or may not use robotics. If ? aw or risk in the context of geosurveys robots are present, value on that opera- as the rich data is locked aboard and tion is likely based on effectiveness or “hopefully” the data is good. There are safety rather than ef? ciency. some additional operating concepts that

For example, carrying a 3000m depth could be applied here including small-

AUV on the back of our 140 ft. survey er, fast support vessels and unlimited vessel is certainly possible (lets carry broadband VSAT solutions which may four). We have a fantastic launch and re- make it work well. covery stinger to do that. The reality is, recovering costs associated with buying Who owns new value creation?

FIND YOUR APPLICATION or leasing the AUV more than triples the In our view, there are several interest- project cost compared to the old fash- ing permutations and combinations of ioned (and reliable!) hull or pole-mount- UxVs coupled with vessels that can be ed MBES. We’d never win the bid, plain applied to create a decent solution set;

Marine MammalsOffshore Renewable and simple, if we are trying for any ac- but, no matter how you slice it, it be-

Energies tual ROI, with an AUV. In the alterna- comes a race to a converging minimum tive, let’s try a few USVs; they’re a bit viable solution. From what we see, the less onerous in terms of costs and risk shift to robotic dominance is simply

LeeWay Striker heading to re? t in December 2018.