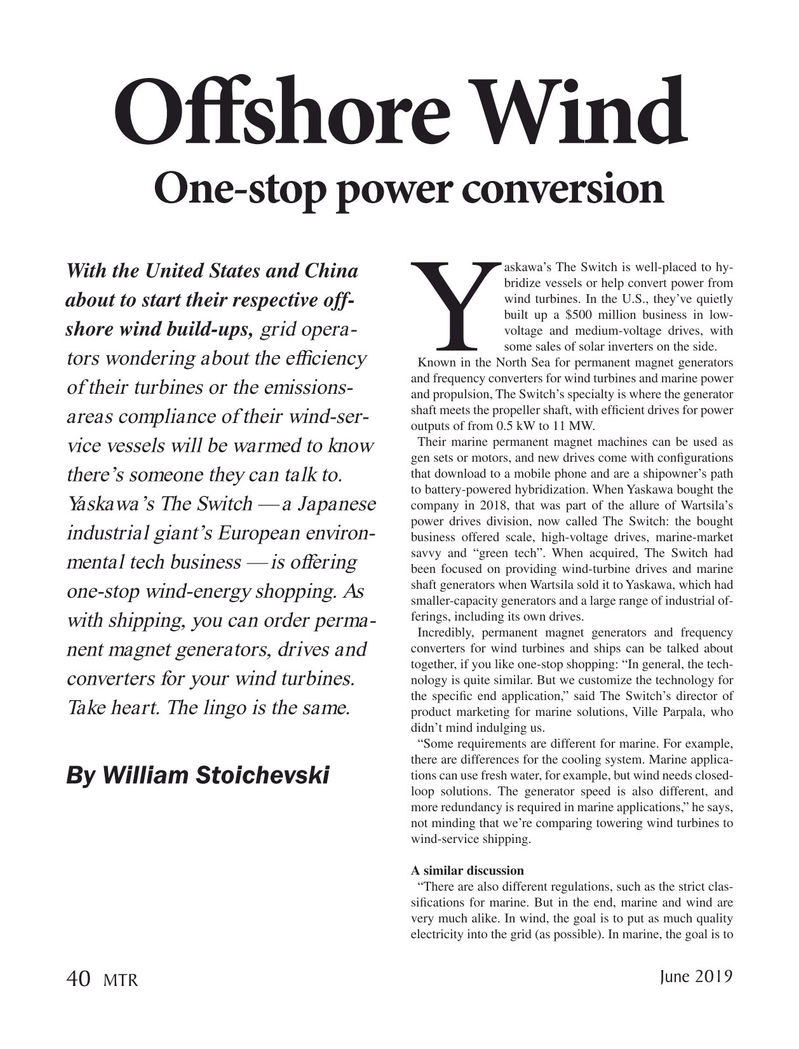 With the United States and China bridize vessels or help convert power from wind turbines. In the U.S., they’ve quietly about to start their respective off- built up a $500 million business in low- voltage and medium-voltage drives, with shore wind build-ups, grid opera-

Y some sales of solar inverters on the side.

tors wondering about the ef? ciency

Known in the North Sea for permanent magnet generators and frequency converters for wind turbines and marine power of their turbines or the emissions- and propulsion, The Switch’s specialty is where the generator shaft meets the propeller shaft, with ef? cient drives for power areas compliance of their wind-ser- outputs of from 0.5 kW to 11 MW.

Their marine permanent magnet machines can be used as vice vessels will be warmed to know gen sets or motors, and new drives come with con? gurations that download to a mobile phone and are a shipowner’s path there’s someone they can talk to. to battery-powered hybridization. When Yaskawa bought the company in 2018, that was part of the allure of Wartsila’s

Yaskawa’s The Switch — a Japanese power drives division, now called The Switch: the bought industrial giant’s European environ- business offered scale, high-voltage drives, marine-market savvy and “green tech”. When acquired, The Switch had mental tech business — is offering been focused on providing wind-turbine drives and marine shaft generators when Wartsila sold it to Yaskawa, which had one-stop wind-energy shopping. As smaller-capacity generators and a large range of industrial of- ferings, including its own drives.

with shipping, you can order perma-

Take heart. The lingo is the same.

“Some requirements are different for marine. For example, there are differences for the cooling system. Marine applica- tions can use fresh water, for example, but wind needs closed-

By William Stoichevski loop solutions. The generator speed is also different, and more redundancy is required in marine applications,” he says, not minding that we’re comparing towering wind turbines to wind-service shipping.

A similar discussion “There are also different regulations, such as the strict clas- si? cations for marine. But in the end, marine and wind are very much alike. In wind, the goal is to put as much quality electricity into the grid (as possible). In marine, the goal is to